Screwing Up At Work

Sometimes things go wrong at work, like in the cases of Enron and Gordon Freeman. Even our own forum goons are capable of messing up in the workplace in ways that cause millions of dollars worth of damage and often multiple fatalities. Enjoy the following tales of how NOT to do your job, and then spend several minutes wondering how the hell some of these people are still alive today. 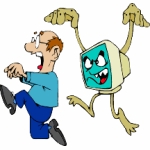 Not me, but my friend who used to work at Radio Shack was sent to deposit an envelope of cash after the store closed one night. Now, this guy is probably the dopiest person that I've ever met, and he had just left the envelope at the bank without closing the overnight deposit box. He just left the damned thing wide open. Needless to say, the envelope was gone by the next morning and Radio Shack was out nearly $4000.

He was promoted to manager a few weeks later.

Oh man, I fucked up so much during my first week I was terrified that I was going to get fired. Luckily I didn't even get written up because my boss was impressed by the amount of composure I used when fixing what I fucked up, and that I was honest about it when I could have just denied everything

Anyway:
- Spilled a urine sample on the floor and my pants (luckily the guy was still going in the toilet so he gave me another one)
- Accidentally left the microphone on while discussing confidential information with one of my co-workers
- swapped two samples by mistake and didn't notice until they had already been sent to the lab (this one made me feel terrible because I was sure an innocent man was going to go to jail and it would be all my fault) but I remembered exactly which two they were and made a statement under penalty of perjury that the two results should be exchanged. Luckily they both came back clean anyway, but I was still scared.

I haven't done anything REALLY irreplaceable yet like accidentally knock someone's permanent record in the file shredder or anything like that.

I work in a casino. I had six slot machines that were being picked up for shipment back to Reno. It's the law that these machines must be sealed by an agent of the state gaming control board before they can be allowed to leave the premises. I radioed gaming ahead of time, saw the agent pass me in the hallway as my assistant and I were loading in the machines, and signed my half of the paperwork.

The truck driver sat on the dock for forty-five minutes before taking off. Gaming never came and sealed the truck. I guess it was my fault for not holding their hand and walking them through their job like I usually do.

A TV station I worked at last year, I was doing overnight master control (in an empty station,) and it was during the Winter Olympics. I was also in school with a full term, and by Saturday night I hadn't slept for over 48 hours. Around 1:00 AM, shortly after the prime time Olympics repeat began, I started to drift off, and then I wake up 30 minutes later, having missed 2 commercial spots, meaning there had been several minutes of dead air.

Thankfully, most of the station's spots were PSAs and unpaid promos, like usual at that hour of the night, so I was able to move the few paid spots into the next break and there was no problem. But lesson learned: Even if it's just 2 or 3 hours between class and work, take a nap. Two days without rest/with very little rest will catch up with you, at the worst time.

Another time, same time period, overnight, weekend Olympics reruns, I had brought in my PS2 so I could play some music for myself during the boring games. Through a mistake that would take far too long to explain the technical aspects of, I accidentally put about 6 seconds of Zeppelin's "Tea for One" on the air.

It's a wonder I never got in trouble for those incidents. Not really I guess, this market's so small, that the only people watching Olympics reruns on an early Saturday or Sunday morning were probably drunk college kids, moments away from passing out. Maybe somebody out there got a kick out of the Zeppelin, who knows.

Thankfully, those were about the only mistakes anywhere near that level of dumbassery/severity I made. On the whole I did my job very well, better than most other people who worked there. Except those two times, durr. I was new, it was an entry-level job at an entry-level station, so hopefully I've officially made all my dumbass mistakes.