It's well established that companies save their fanciest commercials for Super Bowl Sunday, resulting in a 4-hour endurance marathon during which viewers postpone nature's call for fear of missing either game action or funny advertisements. This is why beer sales are surprisingly low on this ostensible party occasion. But while less heralded, the broadcasting channel's in-house graphic-makers also save their finest work for this massive audience, so be sure to appreciate the effort and inspiration that went into the Football Robot's latest antics. These suggestions from the SA Goons range from the kind of animations we might see this weekend to proposals that are too ambitious for current-generation technology but that we might witness in our lifetimes, if we're lucky!

*a giant steel plate slams into a block of granite, several rivets secure the plate to the rock, a first letter is stamped, a second laser engraved, and a third drilled into the plate, the letters spell "NFL," sparks fly*

*football-player robot sprints down the field, takes a flying leap and Transforms into a football mid-flight, colliding with the uprights in a shower of pyrotechnics that fades away to reveal show logo*

*two teams of F-250s drive into each other on a football field, summarily exploding* 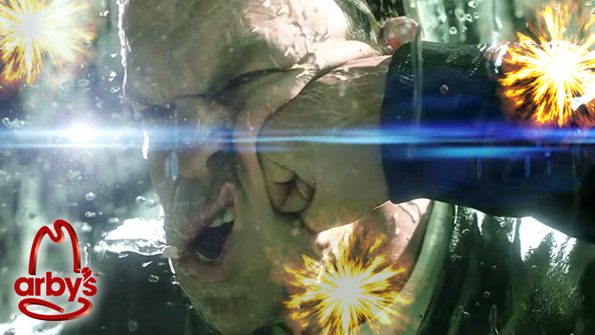 A man's face is struck by a closed fist. Graphic detail of his teeth shattering, his nose twisting, sweat mixing with blood and spittle as deep x-rays show his skull cracking, jaw dislocating. Further still, thermal imaging shows hotspots on his brain where impact trauma causes permanent brain damage. The man hits the groud in ultra slow motion. Blank eyes look on as blood oozes out his nose and mouth, swirling together to form the letters UFC.

*Camera flies between rows of giant sewing machines. They piston up and down, binding together huge swatches of jersey material together with steel cable. The cloth is then taken by robot third world children and riveted together into a giant Ravens jersey*

*Translucent overlay of a speedometer pops up on screen after every pitch. The numbers flash through many absurdly high speeds before settling on what speed the ball was actually traveling*

*cube of steel carved piecemeal by lasers until it takes the form of a soccer ball. Robot arm applies glossy paint finish so it looks like a real ball*

a pregnant robot lays on a table with stirrups and gives birth to a giant metal soccer ball. a section of the soccer ball flips down into a ramp like a space ship and a tiny nude man walks out and waves at the camera, afterwards yelling out "It's soccer!"

complete darkness with only the sound of a beating heart. then an intense pressure, a feeling of moving very quickly and an extremely bright light. you are being lifted up as the football robot dressed in scrubs exclaims, "ARE YOU READY FOR THE MIRACLE OF FOOTBALL?"

a baby is heard crying.