It's April, baby! You know what that means. It's that time of year when the fat white guys with clipboards herd a bunch of strapping young men together to measure their legs and bellies! The GMs are gabbing up a storm this spring about these big boys and what they can do!

It's been a long time leading up this. In February we had the NFL Combine, popularly known as The Westminster Dog Show for People, during which each player is blindfolded and carted into Lucas Oil Stadium, stripped of name and identity and humanity, and made to compete with other players for scarce resources. These strong young men are then placed into a power hierarchy and are compensated financially for their dehumanization into physical characteristics.

Anonymous GM Quote: "Cripes! You seen how big these boys are this year? What they been feeding 'em? I'll have what he's having!" 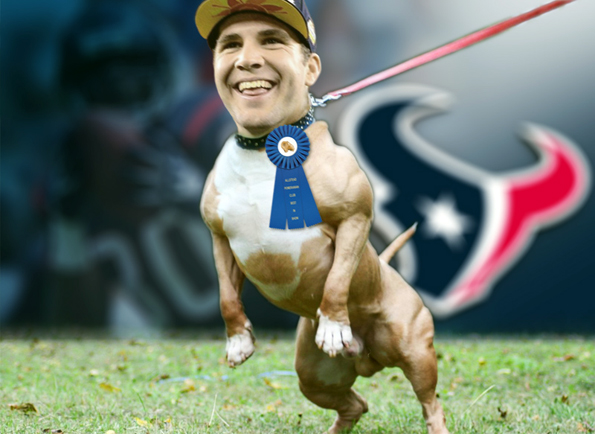 1. Blake Bortles, QB, UCF - Houston Texans: With the first pick in the 2014 NFL Draft, the Houston Texans take such a good boy, such a big boy, what a good big boy you are, yes you are, who's my little man. This strapping young dynamo looks like a greek statue but with a bigger wiener (measured at the combine at 6.4 inches). The Texans have been working out Bortles for a while now, and according to reports, they had him run a race against the horse. To their dismay, Bortles did not beat the horse in the race, but they were really impressed when later, Bortles was able to finish plate after plate of horse meat. 'That boy can put down some horse,' Bill O'Brien, Head Coach of the Texans, was quoted as saying.

Bortles biggest strength lies in his ability to really put some pepper on the ball. Also he is good at keeping his legs moving, as opposed to choosing to not move them. When reached for comment, Bortles claimed that Blake Bortles was really his name and that he wasn't a character in a Thomas Pynchon novel.

2. Jadeveon Clowney, DE, South Carolina - Atlanta Falcons via St. Louis Rams: I fully expect the St. Louis Rams to trade this pick down, as they have repeatedly stated in interviews that their catering staff is already overwhelmed by the sheer mass of big boys that they already have. The Rams have spent many of their recent draft picks on defensive lineman, getting big, healthy eaters who have already put their catering staff in peril. Reports from inside the locker room state that the entire team will sit down with oversized white napkins tucked into their shirts and bang their silverware loudly in their fists on the table as the catering staff brings out an endless procession of black forest hams. 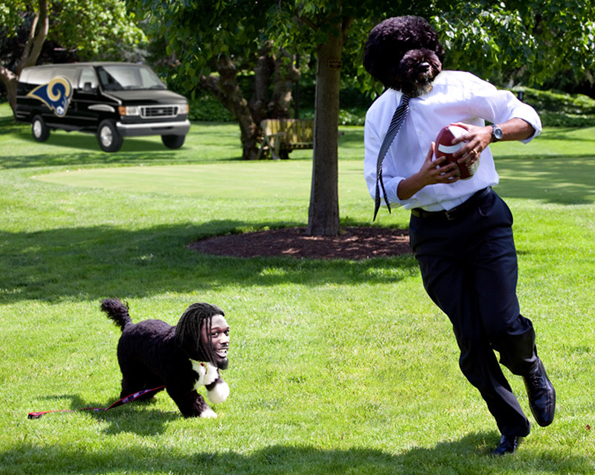 Look for Atlanta to target Clowney, as reportedly their team fridge is filling up with shameful amounts of leftovers that many pundits say Clowney could simply put down in a single sitting. Clowney measured in at 'Hoss' level at the combine and reportedly, according to one anonymous GM, 'dipped an entire fish into his mouth for merely a second, and pulled it straight out of his mouth right after with absolutely no meat left on it, only bones that were picked clean, like some kind of cartoon cat.' With the later-round pick they'll acquire from the Falcons as part of this draft-day deal, look for the Rams to nab a smaller wide receiver who is content with eating scraps, or maybe an offensive tackle with IBS.

3. Johnny Manziel, QB, Texas A&M - Jacksonville Jaguars: Since Teddy Bridgewater's awful Pro Day has him relegated to timeout (reportedly, he was chastised for being a bad boy and sprayed in the face with a squirt water bottle as he bared his teeth in submission), Manziel has stepped up on a lot of boards as just the good strong boy to fill the slot. Manziel is a dual-threat quarterback, meaning he can be both a good boy and a silly goose at times. While he was a bit of a knucklehead during his college career (often asked by reporters 'who's my silly little man' and 'oh no, look what you did, did you do what I think you did, come here and look at me'), Manziel has been able to stay out of trouble lately. 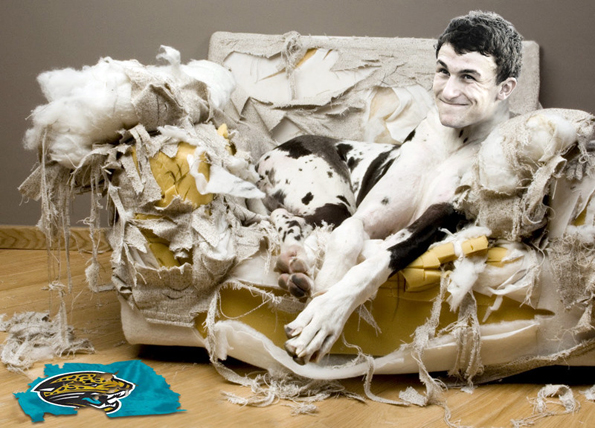 Manziel's stock suffered some at the combine, though. When he was stripped and hosed down before the ceremonial Measuring of the Boys, he was deemed 'grumpy' and 'fidgety.' He also ran slower than everyone expected, which his Head Coach at Texas A&M blamed on the fact that it was a carrot on the stick and not a Natural Light. Regardless, Jacksonville needs some star power, and this charismatic little prince seems like a natural fit, oh yes,yes he does, who is my little man, who is my good little man.

4. Sammy Watkins, WR, Clemson - Cleveland Browns: Woo doggies, can this boy run! At the combine, Watkins showed visible signs of pleasure (curled lips upward, ears up and alert, cocksure strut with nuts presented) while watching the GMs react to his forty time: They were all slapping their cowboy hats back and forth on their thighs and jumping up off the ground in a short, bowlegged fashion, clicking the heels of their boots together in mid-air. 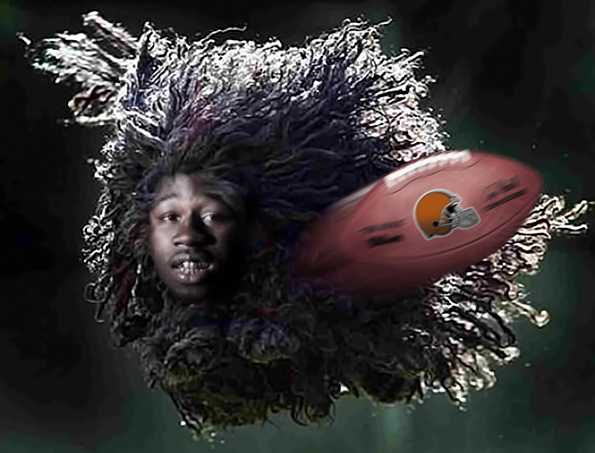 Often referred affectionately as a 'quick little varmint', Watkins has established himself as the predominant offensive weapon in this 2014 draft herd. Although he reportedly did not stand up to par as a big boy while working out (he only finished two plates and ate way too many vegetables) and was reported as being 'shy' during the combine (would run away when the GMs approached, and only by day 3 was allowing coaches to pet his ears but not hold him), many GMs are still very excited about his Gump-like running ability and would like to see just how fast he can get when they are able to feed him even more carbs once he is on their roster.

5. Khalil Mack, DE/OLB, Buffalo - Oakland Raiders: Scouts were apparently so enamored with watching the 6-3, 251 Mack run during his pro day that they were all hollering 'chugga chugga chugga chugga' as that big boy lumbered up and down the sidelines during his workouts. GMs reported feeling a 'latent power' when looking into his eyes. Mack is a big husky boy known for getting his big bear paws up at the line and swatting the tar out of that pig skin. 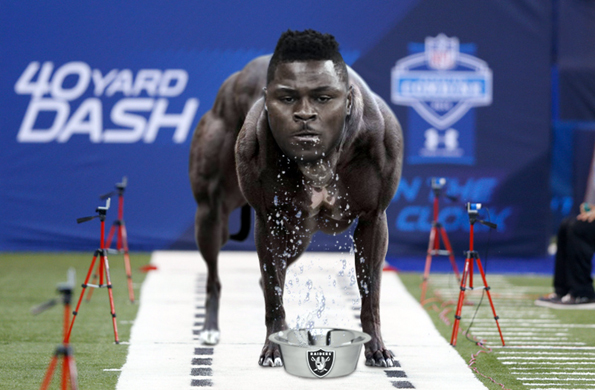 At the combine, Mack was compliant, remaining perfectly still as a show horse as he was measured and lathered in rare combat oils for the Dominus Drills. When asked what he thought his biggest strengths were, Mack said that he was a 'downhill runner with a large motor.' When GMs told him that football was played on an even plane and when a subsequent MRI revealed no machinery in his body, Mack was apparently so confused that he would not get out from under his porch for several hours.

According to anonymous sources, Dennis Allen, Head Coach of the Raiders, has already talked about drafting Mack, and it has been rumored that Allen has spent many still, restless hours in the night fantasizing about how cornfed Mack is going to be when he's done with him. Reporters have confirmed that Allen presented a PowerPoint to his bosses in which a CGI mack reportedly grows to as tall as eight feet after Allen feeds him hamburger after hamburger.

Thanks to Palpek for the images! You can e-mail him here to suggest SA Photoshop themes!