It's an interesting grab bag of films for this week's lineup. We begin with the extremely good Captain Phillips, which impresses Sean "Keanu Grieves" Hanson and reminds him of his piracy days. Failing to impress is Machete Kills, which thinks it's an exploitation film, but doesn't fool Ian "Professor Clumsy" Maddison because he's seen one before. Joseph "Jay Dub" Wade has been to Disney theme parks before too and so finds the familiar reality of the situation in Escape From Tomorrow endearing up until a point.

EXPECTATIONS: Every Paul Greengrass film since The Bourne Supremacy has found its way to my year-end lists, so my expectations for Captain Phillips couldn't be higher. Besides, anytime Tom Hanks gets near the ocean, it's pure magic: Cast Away, Splash!, Joe Versus the -- oh wait, this has the potential to be fucking terrible.

REALITY: Sad. That's the adjective a gaggle of adolescent boys used to describe Captain Phillips as we all lined up for the urinals after the credits rolled. Had I not met them in the Cinemark men's room, I probably would've given them high fives and gold stars because recognizing the sadness in Captain Phillips is both a testament to the boys' maturity and director Paul Greengrass' skill when toeing the line between entertainment and historical record. I hope these kids shape and reflect future audiences because Captain Phillips isn't a great film, but it's staggeringly good in its almost documentary approach -- and it is, indeed, a sad film.

That sadness isn't immediately apparent in a film about the 2009 hijacking of a Maersk shipping vessel by a gang of Somali pirates. Lesser hands would have drawn black hats on the pirates, led by Muse (Barkhad Abdi), and white hats on the seamen, led by the titular Captain Richard Phillips (Tom Hanks). Instead, like the best thrillers, Captain Phillips depicts crime not as the wages of evil, but as the byproduct of competing interests. Phillips needs to get his cargo to the other side of the world by traversing a pirate-infested channel. Muse needs to appease a Somali warlord who rewards any local "fishermen" who can extract a ransom for captured vessels. Each underestimates the other. As hours and options tick away, each grows more desperate. 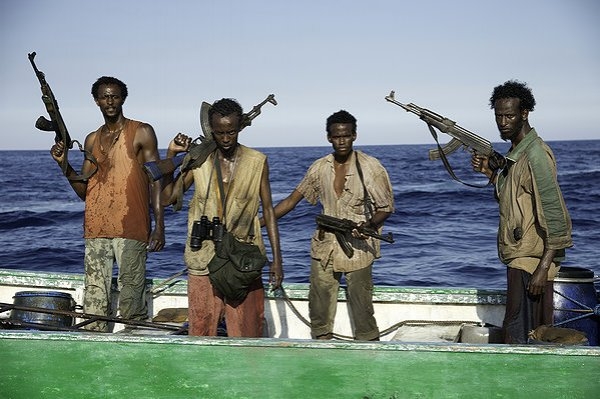 Which one is Johnny Depp?


As I'm familiar with neither the true story behind the thriller nor the nuts and bolts of maritime shipping I can't attest to its accuracy but Greengrass, with screenwriter Billy Ray adapting Phillips and Stephen Talty's A Captain's Duty: Somali Pirates, Navy SEALs and Dangerous Days at Sea, builds a hypnotic verisimilitude through little details: minor tensions between unionized ship workers and Maersk officers as the threat of piracy looms, a sign on the coffeemaker, Phillips checking the manifest, closeups of wear and tear on the boat. The Maersk Alabama is a ship that feels lived in, a ship that groans through every turn.

Similarly, Captain Phillips refuses to villainize its pirates. We understand exactly why they do what they do and the interpersonal tensions among them. At crucial points, at least two prove their capacity for mercy. Hopped up on khat and deprived of sleep, even the baddest of them doesn't seem so bad. If anything, Captain Phillips reverses the trend exemplified by Black Hawk Down and 300 by giving the black pirates more defining characteristics and varied personalities than their white counterparts.

They could've called this Captain Muse or Two Captains or whatever -- hell, they probably should have, considering Muse is far more interesting than Phillips. Here's a guy who doesn't allow his underlings to commit unnecessary violence, a guy who's smart and determined enough to outmaneuver and board a 500-foot cargo ship in a fishing skiff, a guy who sees through Phillips's manipulative efforts to get the pirates off of the Maersk Alabama and on their way with only the petty cash in the captain's safe, and a guy who remains strangely optimistic that the U.S. Navy will be 100% honest when negotiating with pirates in a dead-end situation. In another world, Captain Phillips implies, Muse might have captained his own vessel. That's the sad truth at the core of this film. 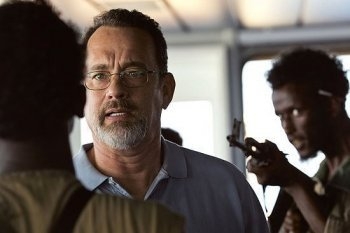 We heard what you said in Cloud Atlas, Hanks.Conversely, Hanks is given little to do outside of the first act -- when he uses nothing but his wits, flare guns and firehoses to keep the pirates from boarding in a refreshing twist on the cinematic traditions regarding naval warfare -- and the final few minutes, when a lesser actor would not have sufficed. Phillips is a static character, a non-starter, a man who only gradually begins to realize Muse's intelligence as he offers one transparent ploy after another to end what he diplomatically calls "a piracy situation" in a transmission to the Navy. I'm not denying his bravery (he ably demonstrates this when he offers himself as a man to be shot when the pirates are looking for someone to shoot) but this middle portion is the giant anchor keeping Captain Phillips in port (oh, Tomatometer, get a load of me) as Phillips tries the same tactics and the same lines ad nauseam, leaving only the pirates to hold our interest.

Like most movies, Captain Phillips could stand to be shorter. Building tension gives way to gnawing boredom until the film's nerve-jangling climax. I realize it's based on a five-day ordeal, but presuming they didn't intend for this film to play out in real time, the filmmakers have already made the decision to pare down reality into a digestible narrative. I'm suggesting they pare it down further. In this case, there's simply not enough reality to sustain a 134-minute film. Captain Phillips is at least twenty minutes longer than United 93 and Green Zone, both Greengrass movies about juicier subjects: 9/11 and the false case for war in Iraq, respectively.

No offense, but this is a film about a boat hijacking that morphs into a kidnapping, an account co-authored by the victim and titled...A Captain's Duty. This is a film that reeks of bloat and self-importance but succeeds on its performances, especially Abdi's, and Greengrass's direction. I hardly expect adolescent boys to identify metatextual whiffling and fitful pacing, but I'm pleased as punch they were able to recognize the chief strength of a film like Captain Phillips. As an amateur critic and cinephile who worries that characterization and writing will someday mean nothing in the face of explosions and boobs, their sentiments give me hope. Now run along, little ones, and watch the films that led to Captain Phillips: the aforementioned United 93, of course, but fictional greats like Dog Day Afternoon, One False Move and The Square. Children, let this be your gateway drug.

MINORITY REPORT: Ahahaha! "Keeping Captain Phillips in port." You'll win a Pulitzer for that one! Or... should I say... a Punitzer!? Ahahahaha puns! I love puns. Film critics eat puns, it's how we stay alive. God knows, nobody gives us money. - Ian "Professor Clumsy" Maddison