EXPECTATIONS: I'm approaching Escape from Tomorrow with equal parts fascination and fear. It's not that I'm worried a film is going to say mean things about a theme park I like to visit, but rather that the mystique of such an intriguing production is going to be all this film has to offer. Shooting an entire movie on Disney property without anyone noticing is a wonderful trick, now let's see if first-time writer/director Randy Moore can follow through and deliver a story worth telling.

REALITY: There is much to be said about what the Disney theme parks stand for. What the corporation advertises as the Happiest Place on Earth is actually a carefully constructed illusion. Endless waiting lines are hidden behind switchbacks and meticulously designed distractions, and a character's ability to appear out of nowhere is facilitated by an elaborate network of underground tunnels. Escape from Tomorrow finds itself trapped in its own sort of manufactured fantasy world, forever teetering on the brink of something truly unique.

On the last day of his family's vacation at Walt Disney World, Jim (Roy Abramsohn) discovers that he's just lost his job. Intent on preserving his happy facade for one more day, he takes his wife Emily (Elena Schuber) and their kids (Jack Dalton, Katelynn Rodriguez) out to the park for some fun. Along the way, they encounter two young French girls whose flirtatious glances lead Jim to follow them all around the park. As he does, things start to go awry. The puppets on It's A Small World begin to look like demons (or rather more like demons); rides seem to intentionally close down as he nears the end of the line; a fat man on a scooter constantly pops up to taunt Jim and his family. 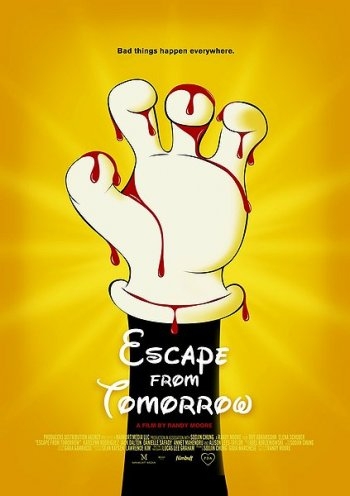 How subtle.Jim's lust for a life other than his own leads him into the bed of a sultry woman (Alison Lees-Taylor) with questionable ties to the Disney parks, and even more questionable intent. As Jim's waking nightmare unfolds, his grasp on reality begins to unravel, and along with it goes all semblance of the film's sense of purpose.

The film's first hour or so is a bracingly honest depiction of domestic malaise. On the surface, this family seems happy enough. Jim has problems connecting with his son, but it's nothing out of the ordinary. Emily's nagging and Jim's wandering gaze threaten to ruin an otherwise perfect vacation, though, and setting all of this against the backdrop of the Magic Kingdom only enhances the notion that sometimes you simply cannot force happiness.

When the family decides to visit Epcot, Escape takes a hard left turn into surrealism, a turn from which it never fully recovers. As Jim attempts to drink his way around World Showcase, he spirals into a bizarre dream state involving Disney princesses that double as prostitutes, a secret laboratory inside Spaceship Earth, and a mysterious virus known only as "cat flu". These images are as striking as they are disturbing, calling to mind all the urban legends that circulate about the Disney company. (Walt's frozen head is buried underneath Pirates of the Caribbean. It's true! Wikipedia told me so!)

They're striking images, sure, but the way they're strung together doesn't make a lick of sense. Here is where Moore's vision falls apart. As Jim becomes involved in a sci-fi conspiracy involving Disney and the robot scientists of the Siemens corporation, the film threatens to veer off into Total Recall territory, but pulls itself back from this fantasy almost immediately. It's almost as if Moore and his crew realized they would certainly fail if they followed this narrative thread to its conclusion. Instead, they chose to fail by introducing even more oddities and nonsensical twists in an attempt to turn this film back into something resembling Walt Disney's Eraserhead.

Admittedly, Escape's gimmick is a fascinating one. That Moore and his crew capture all the busyness of the parks without getting lost in it themselves is a minor miracle. Shooting at three separate Disney locations, it's amazing just how well they stitch things together. Disney aficionados will be able to tell which scenes were filmed in California and which were filmed in Florida, but for the most part it's a pretty seamless edit. Cutting the parks together this way (not to mention the gorgeous black and white photography) lends the film a sense of familiarity that nevertheless seems decidedly alien.

But as much as the film was meticulously staged, reality keeps threatening to creep back in. For instance, there is one shot in which Jim attempts to drown himself in the hotel swimming pool. After a few seconds or so, lifeguards leap in to rescue him. As they drag him out of the pool, Jim says, "Hey, I'm okay! I was just playing around!" Was this scripted, or was it a genuine moment of park employees interrupting a take? It's difficult to tell, but either way, it's a reminder that Disney World is a microcosm of Western civilization at its most extreme. A man can't go face down in a pool for more than three seconds without the nanny state swooping in to stop him.

Ultimately, Escape from Tomorrow finds itself in an odd catch-22. With more resources at his disposal, Randy Moore could have gone full-tilt into the crazy sci-fi/horror conspiracy that his third act seems to suggest. However, if the film were any higher-profile than it is, the corporations involved would have almost certainly sued Moore and his film into oblivion. Escape from Tomorrow is a unique piece of work, but it's much better at suggesting existential nightmares than it is at depicting them.

MINORITY REPORT: This wouldn't be half as impressive if it were shot inside Universal Studios. Get it? -Sean "Keanu Grieves" Hanson