At first glance, you'd think this weekend's Current Releases was nothing more than a celebration of the mundane with both Prisoners and Rush proving largely unimpressive to Joseph "Jay Dub" Wade and Ian "Professor Clumsy" Maddison respectively. Dig a little deeper though (or skip to page three) and you'll see just how impressive Short Term 12 is for Martin R. "Vargo" Schneider.

EXPECTATIONS: "Emotionally draining." "Deeply unsettling." "Long as fuck." These are all common descriptors of Denis Villeneuve's English language debut, Prisoners. If he can elevate his film above simply wallowing in the tragedy of the film's subject matter, then I suspect Prisoners will be right in the thick of things come Oscar season.

REALITY: There is no easy way to make light of child abduction. Believe me, I've tried. In the unholy pantheon of domestic tragedies, child abduction is the giant statue of Zeus that looms over all other tragedies. Now, I know what you're thinking. "You idiot, there is no giant statue of Zeus in the Pantheon." I know that. I didn't study Latin and mythology for three years just to whiff on a statue joke in a movie review. This pointless digression is kind of what it's like watching Prisoners. It's a film with a very clear focus that still, for whatever reason, loses itself down a series of rabbit holes that add up to very little when all is said and done.

After two neighboring families sit down for Thanksgiving dinner, the families' two little girls, Anna and Joy, go outside to play and almost immediately vanish. While hotshot detective Loki (Jake Gyllenhaal) investigates their disappearance, Anna's father Keller (Hugh Jackman) takes the law into his own hands and goes after Alex Jones (Paul Dano), the young man he suspects has kidnapped them. As Loki's hunt brings him closer to uncovering the truth, Keller descends into madness as he tortures Alex for information. 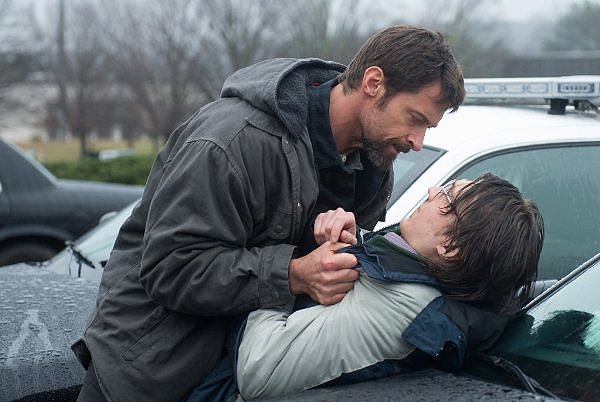 Tell me where my daughter is!


The main thrust of the film follows Loki's investigation. As he puts it, he's "considering all possibilities." This includes investigating the home of Alex's aunt Holly (Melissa Leo), checking up on all the registered sex offenders in a ten mile radius, and even following around Keller, who winds up doing a pretty good job of implicating himself in the crime. Meanwhile, Keller brings Joy's parents (Terrence Howard, Viola Davis) into the mix as he begins brutally torturing Alex in an abandoned apartment that may or may not eventually play into Loki's investigation.

This insistence on investigating exposes the darkness lying just under the surface of this Pennsylvania town. Every stone Loki turns over reveals something seedy or disturbing that only adds to the sense that this town (and suburbia as a whole) is a step or two from the abyss. Could it be the businessman with a German porn collection in his file cabinet? Could it be the deranged shut-in with an affinity for mazes and snakes? Or could it be Keller himself, a Christian survivalist with a basement full of lye and propane? While not all are prime suspects, Loki's investigation reveals the darkness in everyone.

But that's all the film seems to want to do. Revealing the darkness beneath everyday life is fine and all, but without a larger goal in mind it just becomes tiresome. Filmmakers like Davids Lynch and Fincher are masters of this. They do it not just for the sake of it, but to tell us something about ourselves, or to turn the entire notion of normality on its head. Films like Blue Velvet or Fight Club (or perhaps more directly, Zodiac) have a grander scheme in mind than simply leering at the guy next door. At a certain point, Loki's quest to find the missing girls becomes an exercise in misery. It's tantamount to staring at roadkill, turning to the person next to you and saying, "Poor little thing..." 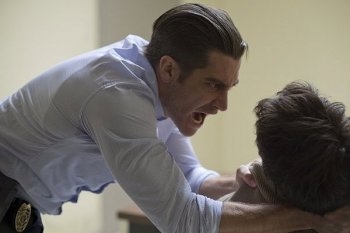 Tell him where his daughter is!The strength of Prisoners is in its cast. There isn't a single bad performance to be found here. Jake Gyllenhaal plays Detective Loki as though he hasn't slept in weeks. His constant blinking and twitching may be a simple affectation, but it's an effective one. Each of the girls' parents display a different attitude to the crisis, and each one sells it remarkably well. Jackman seethes with parental anger; Howard and Davis play up their characters' sense of helplessness; and Maria Bello, as Keller's wife, wallows in a haze of grief and xanax.

All of that said, the real star of this film is cinematographer Roger Deakins. His camera work, which has become a staple of modern crime cinema, is simply outstanding. Most of Prisoners' palpable sense of dread comes from the way he photographs a row of houses on a snowy afternoon or the way he makes an otherwise typical kitchen seem utterly foreboding. No screenplay can convey this; no actor can perform it. The look and mood of Prisoners is downright haunting, and if this film doesn't win Deakins the Oscar, then I'm afraid nothing will.

Why don't I care about this film, then? For one thing, it's needlessly indulgent. If the brutality that Keller inflicts upon Alex doesn't drain your spirits, the film's bloated middle portion will almost certainly do the trick. The pieces fall into place for Loki at a snail's pace, while Keller's situation with Alex points toward no good end for either, an end the film telegraphs from their very first confrontation.

That's really the film's greatest sin. For as bleak as it is, with religious undertones threatening to take the film in an even more maudlin direction, it telegraphs its major turns so far in advance that any thrills we might glean from this mystery instead become anticipation for an ending that's far less profound than it thinks it is. Be advised: Prisoners has apparently murdered David Fincher's Zodiac and is now walking around in public wearing its skin.

MINORITY REPORT: So, this is like The Hunt, but told from the perspective of the crazed, prejudiced townspeople? Yeah, I can go for that. - Ian "Professor Clumsy" Maddison