A week of political intrigue and bloody murder sees Robert Rodriguez's highly anticipated exploitation extravaganza Machete hit screens head-to-head with Anton Corbijn's The American. I sent out the boys - Joseph "Jay Dub" Wade and Martin R. "Vargo" Schneider - to check them out for your benefit.

EXPECTATIONS: Depending on how you felt about the Rodriguez/Tarantino crapstravaganza Grindhouse, the existence of Machete is either a gift from the patron saint of awesome B-movies or another exercise in awfulness from people who apparently have nothing better to do with $25 million. I, for one, fall into camp A, which means I'm absolutely not above enjoying a cartoonishly racist gorefest starring a 66-year-old walking catcher's mitt.

REALITY: Boy, do I love it when the previews don't lie. Machete is exactly the movie promised three years ago by the then-fake Grindhouse trailer, and it's exactly what you think it is. For better or worse, it's 100 minutes of Danny Trejo slicing up mutherfuckers masquerading as a hamfisted commentary on illegal immigration. Racial epithets, ex-federales, low-rider convertibles, tacos; "Mexploitation" in every sense of that word that every film critic thinks he or she personally invented.

Machete's last job as a federale goes thoroughly, soul-crushingly wrong, and he's sent into exile to live as an illegal day laborer in Texas. After winning a fistfight by eating a taco, Machete (Trejo) is hired for $150,000 to assassinate senator McLaughlin (

), a man campaigning for stricter, perhaps even violent, immigration reform. Machete soon finds himself double-crossed, wanted for attempted murder, and under the protection of a secret network of Mexican revolutionaries (led by Michelle Rodriguez). Through an elaborate series of connections that almost makes sense, the police (Jessica Alba), the clergy (Cheech Marin), the druglords (Steven Seagal) and McLaughlin's men (Jeff Fahey, Don Johnson) all end up in one massive brawl full of CG squibs and severed limbs (also possibly CG).

This screen shot just made me go deaf.

If that doesn't sound like a fun ride to you, then you just go right on thinking the B in B-movie stands for "bullshit," because Machete is an excellent B-movie. It's not necessarily a better action movie than some of the stuff we've seen this year, but its heart is in the right place. That counts for a lot when your movie is about a Mexican Mad Max cutting Whitey in half. The movie works as well as it does partly thanks to Danny Trejo being a blast to watch in action, but also because Robert Rodriguez still knows how to make a movie that blows things up and entertains at the same time. This has somehow become a lost art, when it really ought to be chapter one in Film-making for Dumbasses.

However, to say Robert Rodriguez's style is an acquired taste is kinda like saying Taco Bell takes some getting used to. It's quick, it's dirty, it's probably going to cause internal hemorrhaging, but it's also the best thing you could want at 3:00 AM. His action movies are entertaining more often than not, but every one of them looks like it was slapped together with rubber bands and duct tape. Rodriguez supposedly shot half of Machete back while he was also hard at work fucking around with zombies and Rose McGowan on the set of Planet Terror, and it kinda shows. Danny Trejo's face looks less like a waterlogged boot in some scenes than in others, and certain scenes still have that leftover "dirty film print from my neighbor's basement" look to them. It's pretty clear that all the really hard work happened three or four years ago and that Rodriguez got all his actor friends to come down and finish the thing in his backyard over a long weekend.

But here's the burning question; the question that editorial writers and the talking heads on TV are going to be sweating now that Machete is actually a real thing: Will it piss you off? 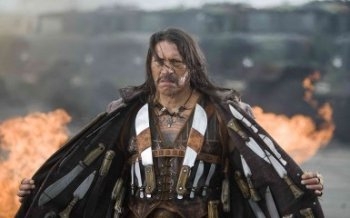 Oh, so THAT'S why they call him Machete.Um ... maybe. If you're the kind of person who looks at an elaborate prank and sees a gruesome political statement, then yes. Machete will probably make your blood boil and steam come out your ears. Incidentally, you might also be Yosemite Sam. If you live in a state bordering Mexico, however, this just might be the most interesting movie-going experience you'll have all year. For you, Machete may wind up sparking some heated debates about how we need to close the borders now before the low riders start swarming our streets like locusts and eating all our crops. The rest of us in the US can sit back and enjoy, knowing full well that the only border we need worry about lies to the north.

Lastly, what's really interesting about Machete is how the movie almost becomes a sideshow attraction for pointing and laughing at a bunch of Hollywood has-beens. For instance, what exactly is Robert De Niro doing in this movie? (The answer: whatever he damn well pleases.) Is it fate or mere happenstance that Lindsay Lohan spends half her screen time sans dignity clothing? Can that ginger kid from the Spy Kids movies seriously only get roles where he's pretending to be Mexican? Why does Steven Seagal look more like Will Sasso impersonating Steven Seagal on MadTV than the Steven Seagal we know and love? Are we sure that this isn't, in fact, Will Sasso?

At any rate ... Step right up, folks! Freaks of nature and perversions of society await your viewing pleasure for the low, low price of nine dollars! Many will marvel, and many may wander away in disgust, but few will embrace it as the loony, gory action fantasy it's meant to be seen as. Machete is a very obvious movie. Yes, it's got a political message, but that message is "BORDR CUNTROL IZ BAD" scrawled across a rusty 4-foot bladed weapon. Something tells me a lot of people will wind up completely missing the joke on this one. Or they're just a bunch of assholes.

MINORITY REPORT: It occurs to me, in the current political climate, that a spate of gruesome beheadings is just what the doctor ordered. Not that I would ever trust a doctor, giving me these bloody pills that do nothing to numb the pain and only serve to make me a servile fool. I'll show them. I'll show all of them. -Montague "Legally Sane" Smythe