Halloween is over, which means you're probably sick of candy by now. Well, we've got some bad news for you, pal, because this week Joseph "Jay Dub" Wade sinks his eyeballs into the eye-candy extravaganza Wreck-It Ralph. Meanwhile, Sean "Keanu Grieves" Hanson gives us the lowdown on The RZA's junk-food flick The Man with the Iron Fists, and Martin R. "Vargo" Schneider checks in from the Philadelphia Film Festival; no food analogy for that one, sorry.

EXPECTATIONS: Hi, my name is Joseph and I'm a film critic in his mid-twenties. I admit to an unhealthy fascination with classic video games and the Walt Disney Company. To say that Wreck-It Ralph was created with people like myself in mind is probably the understatement of the century. The story of a video-game villain who just wants to be the good guy could make for amazing cinema, and I hope this film can mine even half of that potential. I realize I'm setting myself up for some seriously bitter disappointment here, but Wreck-It Ralph could be something special...

REALITY: Producing and selling a film geared toward the video-gamer crowd is a tricky proposition. Go too far in the direction of fan-service and you get a bunch of people screaming about "Too many nerd references in my movie about video games!" Go too far in the other direction, the direction of originality, and a bunch of other people will scream about how the movie uses the arcade concept to create worlds nowhere near as creative as the ones in real video games. Wreck-It Ralph finds that happy medium between the two by planting itself among games we know and forging its own identity. True, the mechanics of the film are kind of derivative, but that's beside the point.

Every day for the past thirty years, a Donkey Kong-esque villain named Wreck-It Ralph (John C. Reilly) has endured humiliation and defeat at the hands of arcade-game namesake Fix-It Felix, Jr. (Jack McBrayer). Ralph has had enough, and to prove he has what it takes to be the hero for once, he travels to a first-person shooter called Hero's Duty to win that game's top honor. Ralph nabs the hero's medal and is immediately jettisoned into a candy-coated racing game called Sugar Rush. There, he meets Vanellope von Schweetz (Sarah Silverman), the cutest, most annoying little shit on the planet. Vanellope isn't allowed to race because of her glitchy programming.

Hi, your kids will be mimicking me for months!

There's more plot about Ralph learning what it takes to become a hero, and Felix teaming up with Hero's Duty's Sgt. Calhoun (Jane Lynch) to save Ralph from Sugar Rush, but the majority of the film is spent exploring the interior of the arcade circuits and seeing how video-game characters live their daily lives. It's a lot like TRON: Legacy, except it's actually fun to watch, and the threat of someone unplugging the machine is a legitimate concern because people actually go to this arcade.

Thematically speaking, Wreck-It Ralph covers much of the same ground explored in the Toy Story films. Underneath Ralph's desire to be respected and hailed as a hero, he just wants to know that his job matters. It's only when he leaves his game that it becomes clear just how important he is in the grand scheme of things. Without Ralph to wreck the building, Felix has nothing to fix, and if Felix has nothing to fix, then the kids playing the game just think that it's old and broken and hey, let's all go play that new bug shooter game instead! I hear it's got realistic slime effects! When you realize that Jane Lynch is basically playing Buzz Lightyear, it becomes abundantly clear the sort of film Wreck-It Ralph could have turned into, but wisely did not.

Ralph's fear is the same as Vanellope's, which in turn is the same fear we all have to deal with from time to time: "What if certain people don't like me?" Everyone in the film fears obsolescence, the notion that if they don't do their job they'll be replaced by someone who will. Wreck-It Ralph doesn't feature any 'staring into the abyss' moments like in Toy Story 3 (so if you have any little ones, this won't give them existential nightmares), but the idea that these characters could lose their jobs is ever-present. Q*Bert and his crew are also ever-present, as they've become the game equivalent of wandering hobos after their game was unplugged. 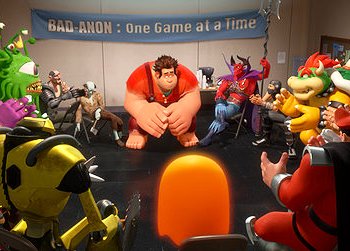 I've died so many times, but will I ever truly know death?

In fact, the idea that some characters are heroes and some villains is sidestepped completely in favor of a video-game world in which everyone has a job to do. Some may enjoy their jobs more than others, and there are certainly perks to being the hero, but most of the villains we see (aside from the film's actual villain) are depicted as working stiffs who have to get up in the morning, go to work and repeatedly get punched in the face. The whole system isn't going to break down if one person doesn't do his job, but Ralph somehow figures out a way for that to happen (because this is a movie and not the goddamn Sims).

I'd like to say this film is teaching kids that when they grow up their jobs are going to matter, and that skipping out on work to go play video games is wrong, because that's pretty much Ralph's dilemma. I just don't see it connecting with kids the way it will almost certainly connect with mid-twenties arcade junkies. Ralph's dilemma should be one we all can relate to on a higher level, but the only real-world people who can relate to Ralph's actual problem are pro wrestling heels, actors typecast as henchmen and, well, you get the idea. Ralph is basically an actor. The closer you try to inspect the game's politics, the quicker they collapse.

Underneath all the bright colors and arcade-inspired music is a film with one or two unique things to say about the way we deal with people, as well as ourselves. Most of the film's characters are written as cliches specific to their own video game (especially Calhoun, who gets saddled with some really terrible Starcraft dialogue), but Ralph has a sense of humanity that most cartoon characters lack. John C. Reilly gives Ralph the kind of warmth that this anti-hero desperately needs, and it's a performance I hope we'll get to see again in some form or another. Maybe in a video game. And then maybe in a film based on that video game.

MINORITY REPORT: Now if only Mitt Romney would tire of playing the villain, he would have a bright future fighting gigantic arachnids on a planet that's a lot like ours but with exponentially more rape spiders. - Sean "Keanu Grieves" Hanson