It's a week of bitter disappointment for new releases; the only real standout here came out 20 years ago. We start with Sean "Keanu Grieves" Hanson's take on the hotly anticipated Evil Dead, followed by Joseph "Jay Dub" Wade tackling the much less hotly anticipated Emperor. Then Ian "Professor Clumsy" Maddison gets closely acquainted with James McAvoy in Trance and Welcome to the Punch. In the back pages, Martin R. "Vargo" Schneider revisits Jurassic Park in a whole new dimension and then pays his respects to the late, great Roger Ebert.

EXPECTATIONS: Of all the canonical horror films, The Evil Dead is the prime candidate for a remake. Even now, Sam Raimi's 1981 "classic" feels like an object lesson in budgetary limitations. Made on only $350,000 - a good chunk of which was spent on reshoots - The Evil Dead suffers from subpar acting, poor continuity and ridiculously bad makeup effects. So, yeah, even though Fede Alvarez has no feature credits to his name, if Raimi and Bruce Campbell, who are producing Evil Dead '13, can hold Alvarez's hand while he smooths the rough edges on Raimi's original, I'm all for it. And the trailer is promising too. 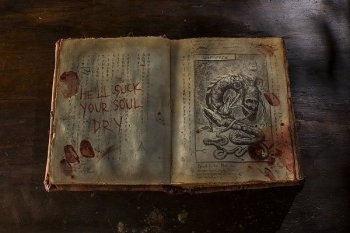 Is this like one of those "For a good time, call..." things?

REALITY: Pop quiz, hotshot: You find a book in a basement decorated with animal corpses strung from the ceiling. The book is wrapped in a Hefty bag, secured with criss-crossed barbed wire. You snip the wire and open the bag. The pages are stretched human skin, and scrawled on these pages - in blood - are repeated reminders not to utter a certain phrase aloud - never, under any circumstances, say this phrase, despite your rebellious impulses and lack of respect for authority. Some unknown benevolent vandal has inked so heavily over the phrase itself that you need a charcoal impression to read what was initially printed. No one else is in the room. There's no one to impress, scare or titillate with your recitation of this forbidden incantation you're not even sure how to pronounce. Do you read it aloud?

If you answered "yes," Evil Dead '13 might be the right film for you, because that's exactly what Eric (Lou Taylor Pucci) does, earning some kind of gold-plated champion belt for being the Dumbest Fucking Character in a Horror Movie Ever. And if you've never seen a horror film before, Evil Dead '13 may shock you. It might even scare you. But I've gotta be honest: Despite the occasional gore-induced squirm and an inspired climax, Evil Dead '13 did little for me - mostly thanks to Eric's unrivaled act of stupidity, which reflects a falseness that pervades this disappointing remake.

While Alvarez and his co-writers wisely retired the Ash character, they've failed to replace The Evil Dead's beloved protagonist with anyone who's half as interesting. The aforementioned Eric, whose idiocy at least make him slightly more memorable than the other characters, joins this weekend-at-the-cabin crew: pseudo-Goth junkie Mia (Jane Levy); her brother, David (Shiloh Fernandez); nursing student Olivia (Jessica Lucas); and David's girlfriend Natalie (Elizabeth Blackmore, stuck playing a pointless character who disappears for long stretches). They're childhood friends, making good on a pact to get Mia clean, and they agree early in the first act that Mia ain't leavin', under any circumstance. So when Mia detects that all is not right with the cabin, her friends write it off as addict-talk and stay there until it's way too late to dodge a bloodbath. 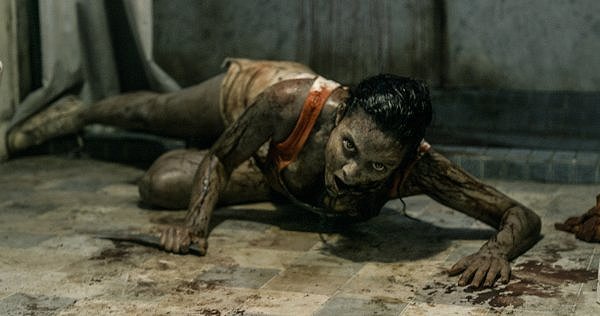 Evil Dead '13 is eerily reminiscent of Resolution, a 2012 film in which a guy imprisons his friend at a similar cabin to help him kick a meth habit. And while I'd hesitate to accuse anyone in Hollywood of intellectual-property theft - it's a big deal to the suits, if you haven't heard - it's darkly ironic that Evil Dead '13 shares a significant aspect of its premise with a recent indie gem that satirizes the trappings of The Evil Dead '81 and other films like it. Hell, if it's a coincidence, it's even more damning: Evil Dead '13 is doing with a straight face that which Resolution - and Cabin in the Woods, of course - did with tongue in cheek. Either way, it's lazy, derivative writing.

I guess I shouldn't expect much from a film in which five educated friends keep a shotgun, a nailgun, a boxcutter and their car keys within reach of a withdrawing heroin addict. But what's so frustrating about Evil Dead '13 is the way it plays a zero-sum game. For every problem that Alvarez fixes (it's polished and technically competent), he introduces another (it lacks the exuberant style of Raimi's original and faces serious questions about its credibility). It's sort of like throwing a fresh coat of paint on your cabin, tearing out the insulation and burning all the furniture. 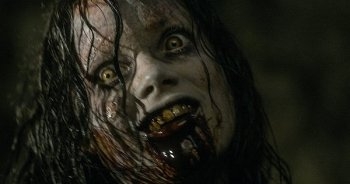 Well, at least you can still laugh about it.Worse, Evil Dead '13 lacks the courage to be truly shocking. While there's a lot of viscera strewn about the set by the film's third act, it never has that shocking "Your mother sucks cocks in Hell!" moment that it aspires to (though it tries really hard with a trash-talking demon gurgling "Your little sister gets raped in hell" and "I'm gonna suck your cock, pretty boy" in quick succession). In the 32 years since Raimi's original earned an X rating and a spot on censorship lists in Britain, Germany and most of the Eastern Bloc, horror apparently hasn't pushed many boundaries. That's what the makers of Evil Dead '13 would like us to believe, because iconic disturbing moments usually arise from moral button-pushing and thematic depth, neither of which they're able - or willing - to achieve. You have to do what it takes to get that R rating and remain at least somewhat marketable, right?


Except... The Evil Dead '81 didn't. Despite an X-rating, it fared quite well in small theaters and video stores because Raimi's youthful irreverence, stylistic playfulness and enthusiasm for shock tactics outshone the budget limitations. Raimi repeated the magic six years later with Evil Dead II: Dead by Dawn, which also earned the dreaded X even after it found a budget to match Raimi's ambition - even after he spun his original idea into a horror-comedy. It looks like Evil Dead '13 is set up for its own sequel now, but what The Evil Dead really deserves is another shot at a brutal, serious remake, by a director who's willing to take his audience seriously.

MINORITY REPORT: Just tell me one thing, does this remake still have that weird "whom" noise when the camera passes a piece of wood? That is probably the single most memorable thing about The Evil Dead for me. That and smashing huge planks of wood across your girlfriend's head. - Ian "Professor Clumsy" Maddison