The Incredible Burt Wonderstone; The Call; Escape From Planet Earth

It's bad, guys. Stay indoors. Avoid the cinemas. Just watch this trailer on a loop instead and pretend none of the films released this week can ever find you. What are these miscreants? We have the mildly chuckle-worthy but problematic The Incredible Burt Wonderstone; the almost-thrilling, ultimately unsatisfying The Call; and the just plain rubbish Escape From Planet Earth.

EXPECTATIONS: When you see a morass of terrible comedy trailers all at once, the trailer that elicits one single laugh starts to look like a rare jewel. That's my experience with the trailers for The Incredible Burt Wonderstone, anyway. Maybe it's not going to be all that good, but when the trailer is paired with previews for Scary Movie V and Identity Thief, it starts to look like comedy gold.

REALITY: When it comes to comedy, I'm always torn. Once I say "it's funny" or "it isn't funny," the extent of my usefulness has already been served. When you click a link to a review for the latest vehicle for Steve Carell's hair plugs, you only want to know one thing: Will I laugh? In this case, you probably will. The Incredible Burt Wonderstone is pretty funny. It's not a hysteria-inducing laugh-a-minute comedy roller coaster, but you might chuckle a few times. So, there you go. Review done.

Okay, but maybe I should do my actual job here. I suppose I'll give you guys your money's worth (you all paid on your way in, right?) and review this film properly.

Oh, sure. Anybody can be magician when your doves are all CGI.


It all starts when young Albert Wiederstein is given a Rance Holloway magic kit for his birthday. Watching the instructional video, he is inspired by Holloway (Alan Arkin) and his incredible magical tricks; soon, he recruits his best and only friend Anthony as his magical partner. The pair grows up to be the Incredible Burt Wonderstone (Steve Carell) and Anton Marvelton (Steve Buscemi), headline performers at a swanky Las Vegas hotel owned by Doug Munny (James Gandolfini), but their act is getting stale and is starting to look naff in comparison to the modern street performer Steve Gray (Jim Carrey). After a rift forms in the partnership of Burt and Anton, Burt turns to his glamorous assistant Jane (Olivia Wilde) to help him get back on the top of his game.

The first issue with this film is the title character. Burt is a horribly unlikeable weirdo, and Carell's performance is just bizarre. It's not weird in a good way, either. He basically plays this character's arc so broadly that it feels less like a personal progression and more like a complete transformation into a totally different person, from unrelatable millionaire shut-in to every-man underdog nice guy in a hundred minutes. He even changes his speech patterns and everything.


There's just no way the inhuman monster from the first act who is so over-the-top as to not understand that room service don't deliver outside the hotel or that people wash their own dishes after dinner can so suddenly become... well... a normal guy. Instead, you end up feeling that the Burt Wonderstone from the third act and the Burt Wonderstone from the first act are entirely different people; perhaps an android killed him off screen and replaced him. 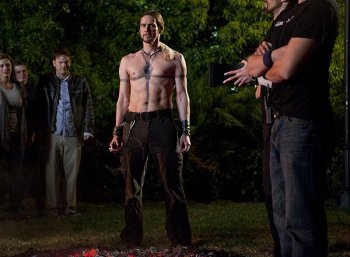 Maybe you should magic yourself up a shirt while you're at it.We can be thankful, then, for Jim Carrey. Here he plays Steve Gray, a Criss Angel-type street magician whose "magic tricks" are little more than nauseating public displays of self-harm. He also has a hit TV show called Brain Rapist.


We are first introduced to him performing a card trick that requires a volunteer to punch him in the face so he can secrete the card within the swelling on his cheek. What makes it great is Carrey's performance, which seems to have been imported from a much better film where he's the lead rather than being wasted as an antagonist with such limited screen time.


Gray is the most interesting character, and Carrey delivers a very surprising performance. There's a great deal of vulnerability behind his posturing and meaningless attempts at sounding wise. This is a damaged person, and his behaviour proves to be its own undoing in the finale. The thing is, once the film has dealt with this character, we're left wondering what tragic series of events led to this fiasco. A There Will Be Blood-type character study of Steve Gray with Carrey in the lead would have been an infinitely better film, but we'll make do with a few sprinkles of interest in here.

In the second act, after Burt has been replaced by MechaBurt, he meets Rance Holloway, his childhood idol. We're glad this happens because it gives the film a much-needed dose of the effortlessly funny Alan Arkin. We all need a little Arkin in our lives. Given that he shares most of his screen time with Steve Carell, it's refreshing to have him there to balance the weirdness of Carell's performance. Buscemi is as good as ever, too, which just makes you wonder why Steve Carell isn't his sidekick instead. Really, everybody but Carell should have been the lead.


And how about that tacked-on romance? Well, I wouldn't necessarily call it a "romance" so much as "Olivia Wilde decides to throw some sex Steve Carell's way because he apologised to her." Here's an interesting test to carry out on a film like this, a test I find to be much more effective than the Bechdel test: see if you can recite the plot effectively without mentioning the film's single female character. In this review, I forced myself to do so because I wanted to make this point later on and could still only squeeze her into the final sentence: "... Burt turns to his glamorous assistant Jane (Olivia Wilde) to help him get back on the top of his game." Poor Jane isn't even given a surname.


In these roles, women are here to judge the redemptive process of the male lead and reward them with themselves. Burt treats Jane so horribly in the first two acts, insulting and sexually harassing her, you'd think she probably wouldn't want to sleep with him just because he was nice to her later on. What's worse is they pay lip service to Burt's unacceptable behaviour. "Hey, you can't say those things! Never mind, you're irresistible to me now." It's sexism disguised as progressivism; women can do whatever they want, but they're still objects for men to own. Women, I'm sorry you have to put up with this in the year 2013.

So, yeah, you might have a few chuckles with this one. Doesn't mean it's a good film. In fact, it's kind of crap when you think about it. It's too old-fashioned in its views, and everything in there that does work, there just isn't enough of. If they make a spin-off about Steve Gray's descent into desperation, though, I wouldn't miss it for the world.

MINORITY REPORT: I'm so glad you came up with an alternative to the Bechdel test, because that's a terrible measure of feminism in movies. Technically the Sex and the City movies pass the test. Two women may be talking about something other than a man, but if the thing they're talking about is shoes, then that doesn't really help anyone, now does it? - Martin R. "Vargo" Schneider