EXPECTATIONS: The "Jewish Metaphysical Conflict Film" is one of my favourite genres right now. I love that there are enough of them that I can pretend this is considered a genre in its own right. This one also has "Sam Raimi presents..." tacked onto all the promotional materials just to sweeten the deal, even if it doesn't mean an awful lot in the grand scheme of things. While I'm hoping for something along the lines of A Serious Man, Holy Rollers or Pi told through horror convention, I'd be happy if The Possession turned out to be just a little bit interesting.

REALITY: Well, it turns out The Possession is actually more effective as a horror film than it is as an exploration of Jewish metaphysical crises. It manages this by utilising every horror movie cliché imaginable and presenting them in a rather down-to-Earth, relatable way. While it all feels familiar, it feels familiar in a way that I think a lot of audiences might warm to. It is extremely predictable and even revels in its predictability at times, and all that Jewish stuff I was so intrigued by is basically just thrown in during the third act in an effort to appear to be slightly original. 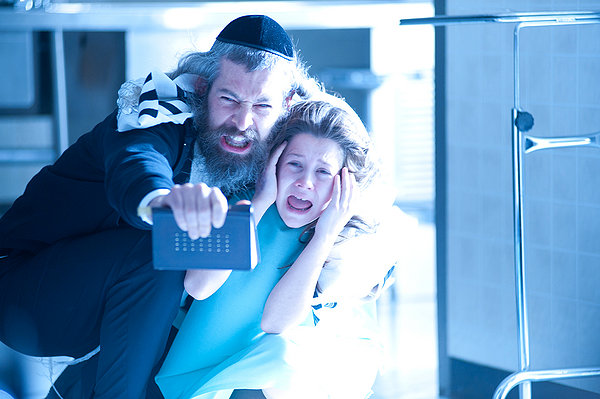 The film is never as entertaining as this image might suggest.

When divorced dad Clyde (Jeffrey Dean Morgan) takes his two daughters Emily (Natasha Calis) and Hannah (Madison Davenport) to his new house for the weekend, he ends up at a yard sale where he finds a mysterious puzzle box that takes Emily's fancy. She insists that he buy it and soon becomes dangerously obsessed with the box and, of course, there's a demon inside that possesses her. So he has to do everything he can to help his daughter and cast out the demonic presence.

I think this film will win people over with its style. They don't go for overwrought pop scares where they're not needed and it rarely feels like they're trying to build you up for one, so the whole atmosphere is one not of impending terror, but of an actual sense of bad things happening very close to home. So much so, in fact, that it's hard to tell if this film has anything at all to do with metaphysicality or if it's all just a cautionary tale on not using your mobile phone while driving. As much as it enjoys bringing up the mobile-phones-in-cars issue, the film is really a story about divorced parents juggling children between them and the difficulties this presents for everyone involved. It starts out appearing sympathetic to these subjects, but it ends up with some very problematic holes in the storytelling.

Being a weekend parent is difficult in itself, especially if you are on your own, because when you have such limited time with your children you dedicate yourself to making that time as special and magical for them as possible. The reality almost always works out a lot differently, because children have their own ideas and, especially as they get older, they become less interested in hanging out with their lame old dad. For younger children, it forms an unstable foundation upon which to build character and so, as depicted in the film, Emily literally becomes a different person on the weekends at her father's house and eventually begins acting out in other situations. She becomes violent in school and lashes out at her mother Stephanie (Kyra Sedgewick) and Brett (Grant Snow), a dentist who may well be her future step-dad. If you're a divorced parent yourself, you may be ready to applaud the sincerity with which this film approaches the subject, but by the end you'll be ready to throw things at the screen in frustration. 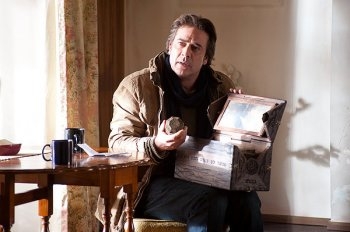 It's pretty much along these lines instead.The Possession follows the mindless Hollywood idea that the best outcome for divorced parents is to end up back together. If you've ever been through a divorce or know anyone who has, you'll know that not only is that a rare occurrence, it's also rare for the divorced couple to even want that. The Possession offers no particular reason for Clyde and Stephanie to get divorced in the first place, other than that he works too much. They seem more like a couple that is just hitting a rough patch, not two people whose divorce was finalised three months ago. Wouldn't a more positive way to depict divorce end with the individuals moving on with their lives and figuring out some common ground as parents? I know that's not as romantic, but it would sure as hell feel more progressive.

That's basically how all of the horror elements in the film end up spinning things; toward romance and happiness and away from progression or reality. The idea of a family with divorced parents struggling to deal with a difficult child is the perfect base for a horror movie, but The Possession takes the easy way out. Clyde turns to the Jewish community for help and enlists the assistance of Tzadok (Matisyahu), a traditional Hacidic who is happy to perform an exorcism. But the exorcism is just a back door, and the the Jewish element is introduced as nothing but a convenient answer to the protagonists' problems.

Considering that Clyde researches this option by watching videos of Jewish exorcisms on Vimeo (I checked, there aren't really any on there), I can't help but wonder how he decided this guy should be his third-act hero and part-time comic relief sidekick. The whole character of Tzadok and his presence in the later scenes of the film are basically there to reassure us that it's all going to be okay. It's all right. Mommy and daddy will get back together and the rest of your problems will sort themselves out as soon as that happens. Just don't use a mobile phone while driving, that's how accidents happen.

People often complain that films will raise a lot of interesting questions and then offer no answers. This is something that Prometheus couldn't wait to rub our faces in. To its own detriment, The Possession is a film that thinks providing poorly considered answers is more important than exploring interesting questions. Even though the cast is generally excellent (especially twelve-year-old Natasha Calis as the possessed Emily), you're going to be left wondering why you ever cared about any of the characters or situations in the film. What could have been a great exploration into families with divorced parents ends up as just a useless film that throws out all meaning in the hopes of finding a happy ending and a religious scapegoat.

MINORITY REPORTS: Having just watched Schindler's List, I think I'm topped off on Jewish horror this week. Sadly, The Possession hardly sounds like Jewish horror at all, which boggles my mind: If dybbuks and golems are so damn creepy, why are co-writers Juliet Snowden and Stiles White wasting their time with divorce drama and driving while texting? - Sean "Keanu Grieves" Hanson

I think I speak for all my fellow divorced Jews when I say none of us will ever see this film. Oh, not because it offends us, but because it looks like crap. - Martin R. "Vargo" Schneider