It's strange to have a week that's just this good. Granted, we get off to a shaky start with Total Recall, but things get progressively better with Your Sister's Sister, Diary of a Wimpy Kid: Dog Days and Bernie, the best of the bunch.

EXPECTATIONS: Unlike most people who talk about movies on the Internet, I'm game for remakes, reboots and adaptations. Whenever possible, I strive to judge films apart from their sources, so as great as Paul Verhoeven's original was, the prospect of a Total Recall remake starring Colin Farrell and Ethan Hawke is still exciting. That was my initial reaction, anyways. As August 3 loomed larger, that excitement waned due to a series of IMDb revelations: This remake is directed by Len Wiseman, the "auteur" behind the abysmal Underworld franchise; Hawke's role was all but cut; and the MPAA awarded Total Recall a PG-13, despite the gloriously excessive violence on display in Verhoeven's original. Uh-oh, I smell failure.

REALITY: The nicest thing to be said of Total Recall '12 is that it's not a complete waste of time, even if it only exists as an affront to, and an implicit criticism of, Total Recall '90 - almost as if Wiseman were trying to erase Total Recall '90 from the pantheon of generally excellent Phillip K. Dick adaptations. Taking on Verhoeven, a director who churned out a string of masterpieces before Showgirls led him to exile, is a ballsy move for Wiseman, who hasn't proven himself to be anything but a mediocre stylist. 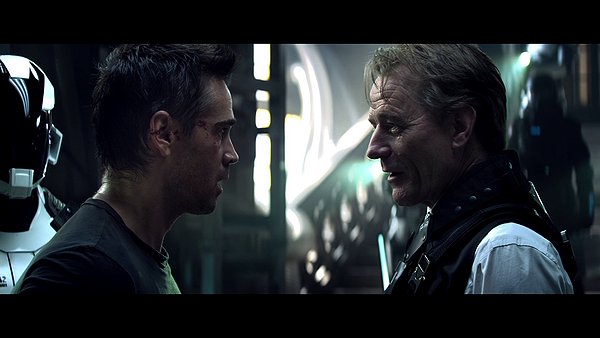 Oh sorry, Bryan. I thought you were Stellan Skarsgard for a moment there.

Total Recall '12 is radically different, as Wiseman - working from a script by Kurt Wimmer and Mark Bomback - moves the action from Mars to Earth, where an apocalyptic event has left only two inhabitable places: the upscale United Federation of Britain and a vaguely Asian underworld known as The Colony. They also strip out the midgets and mutants (except, curiously, for the three-breasted woman), the humor, the gleeful excess, the prolific squibs Verhoeven cherished and any ambiguity whatsoever. The plot hits most of the major points: Douglas Quaid (Farrell), spurred by a recurring dream, buys a memory implant and quickly learns his blue-collar life is a carefully constructed lie; his wife (Kate Beckinsale) reveals herself to be a spy whose sole job is to make sure he doesn't ask questions; and Quaid allies with an ex-girlfriend (Jessica Biel) and a rebel group to overthrow Cohaagen's (Bryan Cranston) oppressive corporatocracy.

Again, I try to judge remakes as movies unto their own, but Total Recall '12 all but begs for the comparison. After all, upending expectations is this film's bread and butter: Its only surprises lie in the homages, in which Wiseman communicates the key thrust of Total Recall '90's most memorable scenes while switching up the most memorable details, and in the writers' almost surgical paring of Total Recall '90's scope and characters. It's rare to see a big-budget remake aim lower than the original, but Wiseman is hellbent on grounding Verhoeven's masterpiece of audacity and imagination. 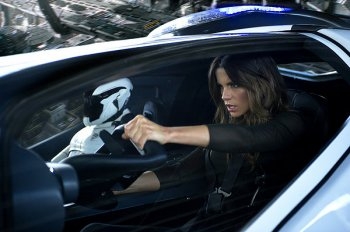 That's how you'd look if you were driving a car with a Star Wars guy in it too.Aside from one truly awful line that attempts wittiness ("I give good wife"), Total Recall '12's dialogue is clipped, straightforward and perfunctory. Characters say only what's necessary to advance the plot. Even Farrell, one of the most likable actors of his generation, can't do much to give Quaid depth. By contrast, Arnold Schwarzenegger, one of the worst actors of his generation, gave us Creepy Quaid and Hero Quaid, with an unsettling twinkle in Creepy Quaid's eyes to comment on his trajectory from unfathomably bad guy to the good guy who liberates a whole colony of oppressed outsiders. Shit, thanks to the screenwriters, Creepy Quaid doesn't even exist this time around. Quaid is essentially the same before the memory erasure and after the transplant that triggers his regression to super-spy, with only a beard to differentiate.

(The only quality Farrell brings to the table is that his martial arts and running scenes are much more believeable. Schwarzenegger is a strong guy, but his size leaves him sluggish and unconvincing, whereas Farrell's wiry frame enables him to fight and flee with equal aplomb.)

OK, so maybe Wiseman isn't a big fan of Total Recall '90. Maybe he wants to quickly pay his dues through homage and essay his own vision of Dick's work. Maybe he wants his film to stand on its own legs as a daringly original take on Dick's "We Can Remember it For You Wholesale." Problem is ... nothing in Total Recall '12 is all that original. Wiseman rips The Colony from Ridley Scott's Blade Runner, The United Federation of Britain from Steven Spielberg's Minority Report, the police robots from Alex Proyas' I, Robot and the chase scenes from both Minority Report and Luc Besson's The Fifth Element. Because Wiseman borrows without intent to return from every major sci-fi movie but Total Recall '90, it's a good indication Wiseman hates the original with every fiber of being and wants to eradicate it from canon. In Wiseman's delusion, he's the master stylist who will fix that Dutch hack Verhoeven's misguided piece of shit. 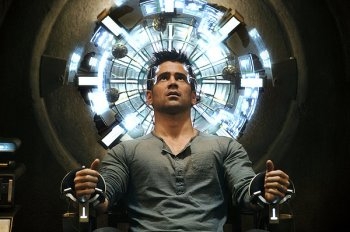 Hair dryers these days are getting really intimidating. I think I'll go for a wet look.Well, Len, you're wrong, and you simply don't compare to a director who knew the definition of ambiguity (though not subtlety - never subtlety) but also knew how to unify seemingly disparate threads into a cohesive whole. Like he did in his other sci-fi masterpieces, RoboCop and Starship Troopers, Verhoeven successfully blended ultraviolence, social satire and sheer imagination. It's a shame to see the traces of his original reflected in such a somber, bloodless blockbuster.

Luckily for Wiseman, Total Recall '12 isn't a total loss. It's damned pretty, and even if it's not original, it succeeds in synthesizing elements from all these different films into a mindless action flick that's never boring and, conceivably, allows Blade Runner and Minority Report to co-exist in the same universe - a feat any Dick fan will appreciate.

But I'd be lying if I said I didn't hunger for more from a Dick adaptation. By the end of Total Recall '12, all the lingering questions from Verhoeven's original are answered here before Quaid gets the girl. The problem is Wiseman or Wimmer or Bomback never realized such questions only remain intriguing as long as they go unanswered. Of course, I'm writing this as I revisit Minority Report, admiring Spielberg's gift for imagination, for dreaming big, for constructing a plausible world through attention to detail - gifts Spielberg and Verhoeven share in a class of directors to which Wiseman simply will never belong.

MINORITY REPORT: I'm definitely in favour of a remake of Total Recall. It's a film that could stand to be remade with more emphasis on the idea of the common man becoming the secret agent with the dark past. In this era of superheroes, it could work very well. Unfortunately, this remake looks like shite. - Ian "Professor Clumsy" Maddison