EXPECTATIONS: I have much love for V/H/S contributors Ti West (The House of the Devil and The Innkeepers) and David Bruckner (The Signal), and I've heard vague rumors of people passing out from fright at the Sundance screenings. Rumors like those are rarely substantiated, but I've waited for V/H/S to hit theaters for more than a year now, and my expectations are at an all-time high. Luckily, even though V/H/S isn't due for theatrical release until Oct. 15, it's available on-demand through iTunes, Amazon, etc. Thank you, VOD model, for alleviating the wait, even if rentals cost $10 a pop.

REALITY: I love horror films, but I've watched so many (359 since May 2009, to be exact) that I generally enjoy them on an academic basis. Sadly, I rarely get that visceral thrill from them and I envy those who do. Despite its numerous faults, V/H/S delivers on at least two occasions -- so well, in fact, I had to pause and take a breather before the 20-minute mark. If you're at all sensitive to horror, you'll get a lot of mileage out of this found-footage horror anthology, the brainchild of six indie directors who use these short films as a platform for redefining -- or attempting to redefine, anyway -- the parameters of found-footage horror. That says a lot for V/H/S, which presents five tales and a framing narrative in 116 minutes, meaning even the stinkers (and there are a couple) don't have the time to grow tedious or beg the question that usually accompanies these films: "Why in God's name are they still filming this?" 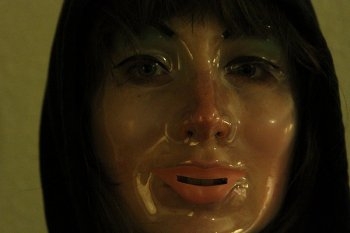 Agh!The framing narrative, Adam Wingard's "Tape 56," follows a group of thugs dumb enough to tape their crimes as they break into a house, where they find a corpse, a flickering TV and a stack of tapes. While you or I might shit our pants in terror, this ragtag gang of criminals ignores these ominous signs because they're on a mission: Some unknown jerk has hired them to steal one specific tape in the house, and they'll know which one when they see it. Of course, this requires them to watch the five tapes that form the meat of the film. As a framing device, "Tape 56" is unnecessary -- I humbly submit that V/H/S would be scarier as a series of emissions from the nether without rhyme or reason -- but at least it sets the tone of the film: It's anarchic, abrasive, amoral and a lot of other A-words, none of which are synonymous with "pleasant."

The first segment, David Bruckner's "Amateur Night," happens to be the scariest, setting a high bar for the films that follow. It introduces three bros, one of whom is outfitted with a pair of camera glasses, on the hunt for complementary hos at the local bar. Upside: They find two women willing to sleep with them. Downsides: That means two of them are about to enter a devil's threesome or one's going to bed alone. Also, one of the women has crazy eyes and a creepy habit of whispering "I like you" repeatedly to our camera guy. By the third "I like you," I was spooked enough to require that aforementioned break from V/H/S. "Amateur Night" is a pitch-perfect study in mounting tension, and when all hell finally breaks loose -- well, it's actually a moment of relief.

Director Ti West switches to low gear for "Second Honeymoon," in which a struggling couple takes a cross-country trip to remedy their failing relationship. Standard-issue road-trip stress, a prophecy and a secret lead to a rather brutal moment of violence, providing conclusive proof that no cross-country trip has ever remedied a failing relationship. West, who's responsible for The House of the Devil and The Innkeepers, is the most accomplished director to contribute to V/H/S, but without the time to develop the atmosphere and gradual momentum of his features, "Second Honeymoon" falls a little short.

That minor slump deepens in Glenn McQuaid's "Tuesday the 17th," which, as evidenced by its tongue-in-cheek title, is the found-footage take on the backwoods slasher film, with a couple of minor twists: The killer's image can't be captured on video, and he actually teleports. The novelty of these twists is negated by shitty dialogue and shittier acting. When one of the teens turns towards the camera and says, "You're all gonna fuckin' die up here," in a flat cadence and with little reverence, it's a little hard to take "Tuesday the 17th" seriously, even if it does feature a great special effect in the simulated tracking error that conceals the killer. Precisely why the killer is impervious to the camera's gaze is never explained, but it's a dangling thread that reinforces one of V/H/S's strengths: nightmarish incoherence on the fringes. 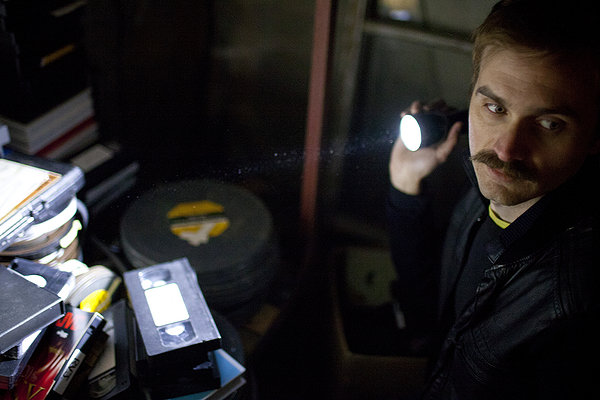 Some of those things aren't VHS tapes, immersion ruined.

Thankfully, V/H/S ends on a high note with "10/31/98," a clever, energetic segment about a few friends showing up at the wrong Halloween party, helmed by a group of directors known as Radio Silence. "10/31/98" plays to the directors' strengths as a vehicle for terrific lo-fi special effects leading to the most absolute of endings to cap V/H/S.

From those descriptions, one might get the sense that only two of V/H/S's segments work, but the sum is greater than its parts. The aesthetic never seems gimmicky, as the filmmakers find plausible methods and reasons to film their individual segments, which cohere into a relatively unified whole despite the variance in video quality and settings -- hell, "10/31/98" is filmed by a protagonist dressed up as a nanny-cam for Halloween.

More impressive than the throwback aesthetics are V/H/S's politics. Instead of punishing promiscuous females, as most defining horror films have done, the filmmakers -- all male, surprisingly -- seek to punish misogynistic males. While nearly every female character bares her breasts, the men behave like assholes and generally catch the worst of it. The thugs in "Tape 56" sexually assault a woman in a parking garage and (attempt to) trick women into fucking on-camera. Even the nice guys in "10/31/98" make a fatal error in judgment by assuming the lone female character is helpless, and they pay dearly for it.

And so does the viewer. V/H/S isn't fun-time viewing. It may not be the most explicit, grueling horror film to come down the pipes, but it certainly doesn't keep the traditions from omnibus films of yore, such as Creepshow or Trick 'r Treat, which sought to provoke both laughs and jump scares. V/H/S, with its gritty aesthetic, feminist politics and unexpected scenes of violence, seeks to make a statement: Horror should be a punch in the gut, not a belly laugh.