Every January at the Current Releases offices, we find ourselves lost in discussions about how to define the year in cinema. This is much easier with the benefit of hindsight, let me tell you. With that in mind, here's the line-up: Ian "Professor Clumsy" Maddison is all set to talk about the most interesting film of the year that isn't Footloose; Joseph "Jay Dub" Wade laments the swath of alien invasions in cinema; Martin R. "Vargo" Schneider shares his feelings on what he believes to be the defining film of 2011; Sean "Keanu Grieves" Hanson takes an interest in the hybridisation of action and art; and, finally, Donald "TheBigBudgetSequel" Hallene III (him what does our snazzy banners and writes for DailySmash.net) has a bloody good gush over Hugo.

If you ignore all the bad shit that's going on in the world and simply focus your mind on cinematic output (which is what I do every day), it becomes very clear that we live in unusual but exciting times. I gave serious thought to writing a whole bucket of words about Footloose, but I think I've said enough on the subject already, both in my review and in idle conversation with anyone who will listen ("Let me tell you about Footloose" will be my epitaph). Instead, I want to talk about another film that impressed me this year. This film was a rare of example of something for which I held the very highest of expectations and was not at all disappointed. I am talking, of course, about James Wan's Insidious.

In a year that saw a third Paranormal Activity movie sneak its way undeservedly into cinemas, it seemed that those Hollywood types had nailed exactly what it was people wanted in a horror film: haunted houses filled with as many pop scares as humanly possible, basically turning cinemas into a theme-park attraction. Wan and his writing partner Leigh Whannel took that idea and ran with it. You want pop scares? Insidious is loaded with pop scares. They don't lose any effectiveness for their frequency either, for one simple reason: There are no false scares. It's never the cat jumping out or a pan falling off a hook in the kitchen; every pop scare is some interaction between the protagonists and the various ghosts or "Insidious Entities." 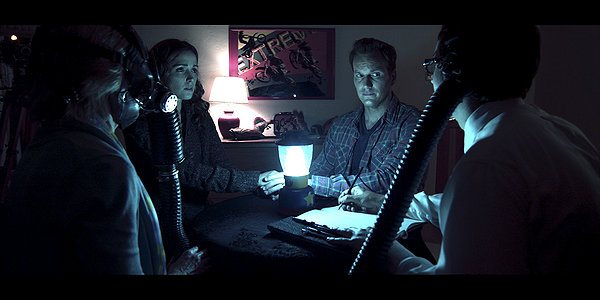 Something's not quite right here.

You see, the Insidious Entities are not the invisible demons of Paranormal Activity, but instead a colourful ensemble of characters in their own right. We learn about them through these momentary glimpses as they lurch from the shadows to give us the wobblies. A perfect example is the scene in which a greasy, scarred man is seen pacing outside the window, then suddenly he appears inside the room. Holy shit! But, you have to ask yourself why he is pacing in the first place. Why is a ghost getting impatient? The answer is revealed later, but if you never considered the question it won't mean as much. This kind of thing is what makes Insidious such an interesting and layered film, one that's very rewarding of repeated viewings, if you have the stomach for them.

By showing us just how to do a haunted-house movie loaded with pop scares while still maintaining brilliant story-telling, Insidious reminds us that this is just the first act. All this modern nonsense is about to get buried in a whole lot of familiar horror tropes in the second act. And it does, initially, by introducing us to the comic relief characters. There is no other way to describe them beyond saying that they are Ray and Egon from Ghostbusters. Not literally, of course, but they are bloody close. 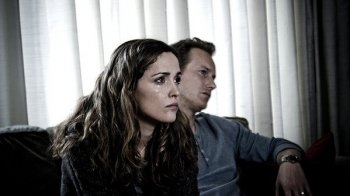 Character dynamics established in cliche end in unusual ways.As the Ghostbusters search the house, they find confirmation of spooky goings-on in the form of an homage to The Shining. This is a perfect excuse for a seance straight from The Changeling, leading to an exorcism as the possessed demon child tosses people around the house. When I say it like that, it sounds like a re-hash of every horror film from the '70s and '80s all rolled into one. It is so deliberately familiar as to actually lull us into a false sense of security, in spite of the sheer amount of scares being thrown at us.

But there is still unease, something about all this familiarity seems not-quite-familiar. Maybe it's the innovative visualisation of the seance, with antique gasmasks connected directly to headphones, providing an eery link to the spirit world as flash bulbs trigger incessantly to warn of ghoulish activity we otherwise cannot see. Suddenly, we realise that all this familiarity is deliberate. It is here to remind us of our comfort zone when watching these films. We feel safe because we know what will happen, even if the imagery is unsettling. But, the third act looms, and it is here that Insidious dares to alienate its audience. 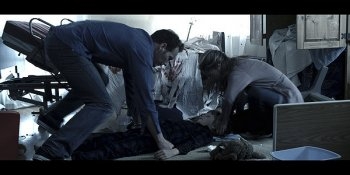 You can't rely on your bed now, audiences.Reactions to the third act of Insidious were mixed; many, many people hated it and were even angered by it. Even our own Mr. Schneider was turned off by the sudden change of direction and felt that the film suffered greatly because of it. I was perhaps lucky in this regard, because I was armed with a little forewarning, not of exactly what was happening, but simply that something happened that people weren't liking. When I watched Insidious in a cinema full of people who went from screaming and whimpering at every scare to becoming confounded and confused by what they were seeing, I felt like a great gift from the movie gods had been bestowed upon me. I knew exactly what I was seeing, and it was something completely new.

You see, after you've filled your brain with horror films, you go to bed and stare into the darkness. Images play on your mind and, drifting into your subconscious, you continue the themes of the story. The film never ended, you are making the final act in your dreams and it never ends well. Insidious' third act does this for you; with the ammunition of a hundred horror films in its visual memory, it delves into the world of dreams. As Patrick Wilson wanders through a fog-shrouded nightmare world in search of his son, all those creatures we saw only in glimpses are out to stop him, including the one that used to haunt his own nightmares as a child. The comfort of your bed is replaced by the comfort of pre-established horror tropes, and it doesn't take long to realise that in this cinema full of strangers, the comfort of your bed has been denied you and you're on your own from here on out. Insidious takes horror and makes it personal. It is a film for lovers of film that is as much about the audience as the films themselves.

For all those who disliked it the first time around, I implore you to give it another chance and see for yourself just how ingeniously composed it is. For all of its familiarity, Insidious is the most unique, original and affecting horror film of recent years. Unfortunately, like so many great horror films, it will probably take another twenty to thirty years before most people notice.