The Watch; Step Up Revolution; Safety Not Guaranteed

The best thing to do the week after the release of a big blockbuster like The Dark Knight Rises is to sneak out your most forgettable crap. This is why we find The Watch and Step Up Revolution both hitting our screens this weekend. On the plus side, we also have Safety Not Guaranteed, so there's that, at least.

EXPECTATIONS: Why does it seem like every time a comedy casts Vince Vaughn as one of the leads, the creative process breaks down to make sure Vaughn's improvisational babbling doesn't get steamrolled by too much plot? I've made this complaint before, so I'm hoping the combined talents of the the cast and crew can stifle him long enough for a couple of decent jokes to land.

REALITY: If you love alien-invasion movies, but can't stand all those pesky subtle metaphors, The Watch may be just the film for you. It's a film about overcoming impotent rage in all its many forms, but it lacks both the comic wit and skillful direction to avoid flat-out saying what it's thinking. In lieu of creating its own style or language, The Watch cribs stylistic choices and musical cues from a number of better films to get its point across, ultimately feeling like a cheap imitation that's so darn proud of itself for being a horrible thief. 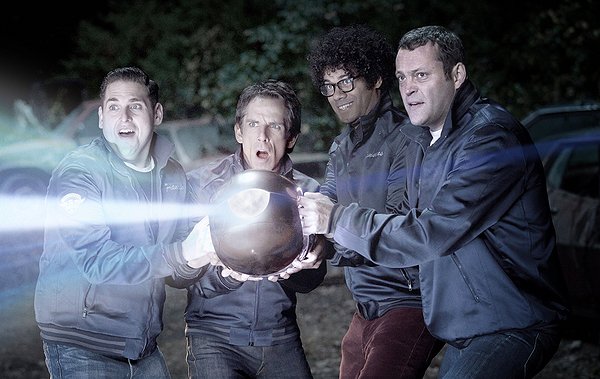 As we first meet Costco manager Evan (Ben Stiller), he tells us of all the clubs and committees he's a member of in the town of Glenview, Ohio. Evan is the man that Rushmore's Max Fisher would have grown up to be. When his overnight security guard is mysteriously murdered, Evan forms a neighborhood watch to investigate the killing and keep his idyllic community safe. At the watch's first meeting, only three people show up: loudmouth doofus Bob (Vince Vaughn), police academy reject Franklin (Jonah Hill), and British transplant Jamarcus (Richard Ayoade). Thus assembled, the watch discovers an alien invasion taking over their town, and with the help of Franklin's improbably large gun collection, the guys take the fight to the aliens before more arrive.

Much to my surprise, Vince Vaughn is not the most aggravating thing about this movie. He is high in the running, certainly, but his man-baby-ish rambling is at least given a purpose here. The Watch's most egregious misstep is how clumsily it handles its central concept. We're told that aliens are tearing people's skin off their bodies and wearing them as disguises, which means anyone in the film could be an alien. The paranoia of not knowing who to trust is as old as cinema itself, but while The Watch could have easily played that for laughs or used it in a clever way, it instead uses it as an excuse to populate its supporting cast with a bunch of weirdos to no discernible effect. For example, it sure is funny how Will Forte keeps showing up to give Ben Stiller the stinkeye. He's so weird, he must be an alien, right? Nope! Turns out he's just a useless police officer and has a funny way of showing it. 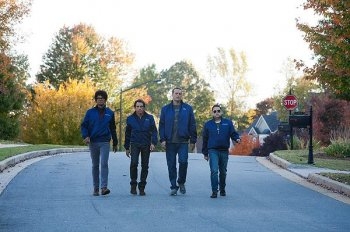 Only one of you deserves this. You know who you are.In a way, this plays into the film's central theme of characters overcoming impotent rage. The neighborhood watch has no real authority, which drives Evan and his crew crazy when the police refuse to take action. Franklin, especially, can't abide by this, which is probably why he's stockpiled enough guns to arm a small country. Bob feels emasculated by his inability to control his teenage daughter, and sees her boyfriend as a threat to his own manhood (the way the film resolves this subplot is possibly the least subtle visual metaphor I have ever seen in a major motion picture). Meanwhile, Evan is literally having problems with impotence, as his sexual relationship with his wife is sputtering out, which is only made worse as he tries to find a way to tell her that he's also sterile. Only Jamarcus seems perfectly content to be the fourth member of the team, and as this film's ethnic Ghostbuster, he at least gets to jump through more narrative hoops than Winston Zeddemore.

So while the film approaches its themes with all the subtlety of a tack hammer, it at least addresses them and sees them through to the end. The same cannot be said for any of the film's generic ambitions. For an R-rated sci-fi/horror/comedy film, The Watch is remarkably light on all three of those things. It is only a comedy in the sense that it stars four comedians who make a bunch of dick jokes in between alien encounters. It is only an alien-invasion film in the sense that aliens exist, but never seem to be doing anything other than mauling hapless humans; this film could be about a cheetah infestation and we wouldn't be losing very much. Its horror elements are few and far between, only briefly showing us the mutilated dummies of characters the film clearly never even needed.

What I will say in favor of The Watch is that the third act is pretty solid. It's nothing compared to the finales of invasion films like They Live or last year's superior Attack the Block, but it manages to pull together all the garbage character building and plot contrivances up to that point into something almost worth watching. If only Seth Rogen and Evan Goldberg's script had been funnier and Akiva Schaffer's direction hadn't been so rough-shod, The Watch might have become the goofy parody of Signs-by-way-of-Ghostbusters it so desperately wanted to be.

MINORITY REPORT: Whenever I see Ben Stiller in something like this, I can't help but wonder how much better it would have been if he'd directed it. As a movie star, he's almost always under the guidance of directors less talented than he. The same can now also be said of Richard Ayoade, whose feature film debut was the wonderful Submarine. And now look at the pair of them, doing schtick in high-concept, written-by-committee action comedies. - Ian "Professor Clumsy" Maddison