It's the movie event of the summer in the form of Joseph "Jay Dub" Wade's review of The Smurfs 2! As a palate cleanser, Martin R. "Vargo" Schneider lets us know why we'll all probably enjoy 2 Guns.

EXPECTATIONS: The Smurfs' first film adventure represented everything that's obnoxious about children's movies. This sequel has loomed over the calendar year like a blue-tinted vulture, waiting for its chance to peck away at the wallets and minds of unwitting adults the world over. There is no escaping the Smurfpocalypse, so the only thing left to do is dive in headfirst and pray for a miracle.

REALITY: Two years ago, I made the mistake of saying that The Smurfs was a forgettable trifle of a film. With time and some intense psychotherapy, I learned the horrible, painful truth: The Smurfs is not easily forgotten. I did not forget; the world did not forget. And now here we are, stuck with a Smurfs sequel whose stench will probably linger just as long. This time, though, the film ditches the original's incessant need for plot and replaces it with a whole lot of dead screentime. The Smurfs 2 is the cinematic equivalent of watching your children laugh at paint drying. 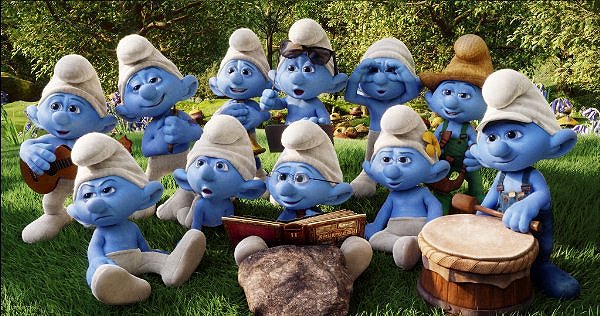 Look at these poor people. Set them free, America!


When last we left this awful universe, everything was hunky dory in Smurfland, and Gargamel (Hank Azaria, the only one actually earning his paycheck) was trapped in the real world. Now, having achieved international stardom as the world's greatest magician, he once again hatches a plan to steal the life essence of Smurfs. He creates Vexy (Christina Ricci) and Hackus (JB Smoove) -- two grey Smurflike golems called Naughties, whose badness can only be measured in cutesy screwball antics -- to kidnap Smurfette (Katy Perry) and force her to reveal Papa Smurf's formula for turning fake Smurfs into real Smurfs. (So that he can create more fake Smurfs and steal their life essence. A renewable energy source; I fail to see the issue here.)

Papa Smurf (Jonathan Winters, in the role that killed him) gives chase, cooking up a magic batch of crystal meth in order to send himself, Clumsy Smurf, Grouchy Smurf and Vanity Smurf to our world, where they enlist their human buddies Patrick (Neil Patrick Harris) and Grace (Jayma Mays) to help them rescue Smurfette. They arrive just in time to meet Patrick's overbearing step-father Victor (Brendan Gleeson), a corndog magnate heretofore unmentioned in the Smurfs cinematic canon. Everyone goes to Paris to stop Gargamel, who immediately turns Victor into a duck. Then some more things happen under the guise of Smurfette and Patrick working out their convoluted daddy issues.

Clearly this complex, nuanced plot required the full attention of five (!) screenwriters. (The first Smurfs only needed four.) The resultant film is so eager to end itself that it practically leaps over plot points on its way to the closing credits. Character development is jettisoned in favor of chase scenes in which no one is being chased. On at least three different occasions, Vexy and Hackus take Smurfette on a whirlwind tour of Paris that accomplishes nothing but eating up screentime and production budget. 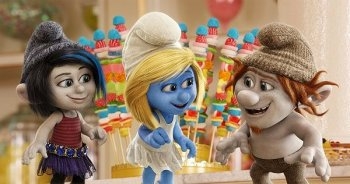 Oh God, that's horrifying. What is going on? Why did we allow this to happen?Everything about this film is a complete and utter struggle for your children's attention. When Brendan Gleeson, who I'm convinced thought he was actually being sent on an adventure, stops looking like he's having fun, the film turns him into a duck with an Irish accent. Then Neil Patrick Harris and Quackers McCorndog run around a Parisian hotel looking for Gargamel's penthouse suite. When that stops being fun, the film cuts to the Naughties tearing up a pastry shop to the worst rendition of "Tutti Frutti" I've ever heard. When that stops being fun, they steal a pair of storks from a fashion shoot for pregnant women and fly around the city. And when the film finally runs out of pointless diversions, Smurfette and Patrick are forced into heart-to-heart conversations about the people who really matter in their lives.

To the film's credit, the message it hamfistedly tries to cram in at the last possible moment is a fine one. Smurfette may have been created by Gargamel, but Papa Smurf made her who she is; Patrick's father may have run out on him, but that's no reason to resent the duckman who actually raised him. The film argues 'nurture over nature,' but its presentation is so simplistic and flimsy that Clumsy Smurf might as well have scrawled it in blue permanent marker on a dusty green chalkboard and then said "W-w-whooops!" right into the camera.

And then, because we live in the era of endless franchises and naked cash grabs, the film leaves a thread or two open for the inevitable Smurfs 3:

"Look at this thing in a green handkerchief."

"Oh, I don't know, Screenwriter Smurfs 1-5 haven't figured that out yet."

The world waits with bated breath to unravel this mystery! Plus, maybe by then Papa's magic crystal meth will have caused such an uproar among parents that the filmmakers will have no choice but to cast Bryan Cranston and Aaron Paul in the next film for a one-off joke that the target audience will never even notice.

See, Smurfs writers? This stuff practically writes itself. How about tossing me some of that production money you've been hoarding? We may not make Smurfs 3 a better film, but we can at least make it into something actual human beings will want to watch. We might even make a movie people over the age of three will want to watch more than once! Isn't that the goal here? Whaddaya say, guys?

MINORITY REPORT: Joseph, you know the entire movie-going public of the planet has been awaiting your post-Smurfs 2 meltdown more than the film itself. What is this reasonable review all about? This just won't do. Nobody is going to be truly happy until you take up arms against them in a violent anti-Smurf rampage. - Ian "Professor Clumsy" Maddison