EXPECTATIONS: Legend tells of a movie. A movie based not on a comic book, but on a piece of cover art and a name that would later become a comic book. Sure, there had been movies bankrolled on title-only speculation before, but this one, well... this one was different. This one had big names, nerd credibility, and a chance at seeing Olivia Wilde naked. So, needless to say, folks in the little 'ol town of Vargo were excited to see this movie roll in. Only time would tell if it was worth all the dern fuss.

REALITY: Well, this movie certainly delivered on its promises. There were both Cowboys AND Aliens in it. Honestly I could have used more of the former and less of the latter, but what can you do? Complain, that's what. If you told me that Jon Favreau was directing a western with Daniel Craig, Harrison Ford, Sam Rockwell, Paul Dano, and Olivia Wilde, I would be first in line to see it. But when you add that it is the second alien-themed movie this week and the sixth one this year, I start to lose interest. 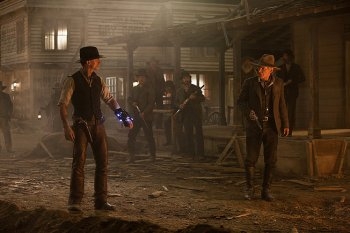 Let's be honest, seeing these two look bewildered at each other is the only reason you want to see this film.Our story begins when outlaw Jake Lonergan (Daniel Craig) wakes up in the desert with a strange bracelet attached to his wrist and no memory of who he is or where he's been. Jake wanders into a small town called Absolution, where he gets into a fight with a spoiled punk named Percy Dolarhyde (Paul Dano), inciting the anger of Percy's father Woodrow (Harrison Ford). Someone gets shot, Jake and Percy get arrested, and this conflict is about to come to a head when some alien ships come out of the sky and start snatching people up, including Percy. Jake shoots one down with his handy-dandy arm-mounted laser cannon and prepares to lead the remaining townsfolk in the search for their loved ones. Well, first we have to take a short but still unnecessary journey through the memories Jake isn't supposed to have, then we can lead the townsfolk. Oh, and for some reason, this movie has a "cute little kid" who is not that cute and definitely not entertaining. Also, Sam Rockwell plays a bartender named Doc, because Los Angeles County law dictates that all movies in the Western genre must have one character named Doc.

The film's cast is definitely its greatest strength. Every performance comes from an actor truly giving it his/her all. (Except Paul Dano, who disappears fifteen minutes into the film.) Harrison Ford in particular seems to be having the most fun he's had in years, playing a grizzled old man whose first instinct upon seeing a giant metal flying machine that spits out explosions is to stand in the middle of the street and blast away at it with a six-shooter. (I have no doubt that this is how the real Harrison Ford would react to an alien invasion.)

On occasion, Daniel Craig stops his stoic badass routine long enough to let a little confused charm shine through, and it is amazing. Olivia Wilde, like Dano, simply isn't given enough to do. She's there to look pretty and provide backstory. As a side note, Wilde had better get used to these Sci-Fi roles, because there has never been a more beautiful human being who does not look like a human being at all. Everything about Wilde looks like someone trying to computer-generate a good-looking woman. Olivia Wilde is the Uncanny Valley.

Are you charging them on horses? What are you going to do when you get there? They're in the sky!

So, what's the problem? The problem is that half the writers came from LOST, and as we all know by now, those fuckers don't know when to quit. We're riding along, having fun, good characters, funny lines, a cool action sequence here and there, and then we get THE BIG REVEAL, along with some backstory, and it is dumb. So dumb I wish that none of this sci-fi crap even happened, and we just had a straightforward Western with these guys. Yes, I am complaining about the existence of aliens in a movie with Aliens in the title, and here's a spoiler-filled reason why: 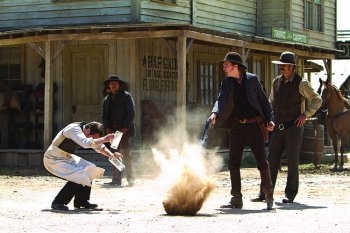 I think you may have missed.It is explained that the aliens' motive for coming to Earth is apparently because they want gold. That's it. They don't live off it or anything, they just want some. This is so ridiculous that Harrison Ford's character even points it out, though his objection is immediately glossed over. Wait, so why are the aliens kidnapping people? Because they're studying our weaknesses, learning how to wipe us out. Wait, what? I thought they wanted gold. They're clearly better miners than we are, can't they just come in and, y'know... take it? It's not like we're in any position to keep them from it. Hell, we didn't even know about it until they grabbed some women. And how long can it really take to learn the weaknesses of humans? It takes only eight pounds of pressure to pierce human flesh. Also, they are flammable. There ya go. Furthermore, if they are trying to learn our weaknesses, it doesn't explain why Jake finds everybody, basically intact, standing in the ship and staring at a bug zapper.

What follows is a series of events that don't make much sense, including a bunch of Indians who are magic and can give people back their lost memories, because they apparently wanted to remind people how horrible this scene was in Jonah Hex. (Just kidding, no one saw that movie.) I suppose this makes sense for a film that makes the one dark-skinned character (Adam Beach) the tracker, inasmuch as he occasionally looks at the ground and says "Hey look, there are/are not tracks!" All of this is forgotten by the final battle, however. The action sequences of the cowboys getting up close and brawling with the aliens are a lot of fun to watch, and they also display a bit of creativity that should have been more present through the entire movie. Also, you get to see James Bond and Indiana Jones take turns shooting a giant green monster, and that's what you paid to see, right?

Jon Favreau has made a movie that exists purely for the spectacle of it existing. I suppose that's appropriate enough, given where the story came from, but it just feels like it should be better. With its subtle nods to John Ford and its pitch-perfect western attitude, Cowboys and Aliens seems like it wants to be more than standard summer entertainment, but it isn't allowed to be.