EXPECTATIONS: When I sat down for the new Transformers, the theater was packed with parents dragging along kids too young to even remember the 2007 film. Mom, dad. I know your little angel loves him some transforming robots, but have you seen these movies lately? The last one ended with our one-armed hero shooting his adversary in cold blood, and Shia LaBeef tearing Starscream's eye right out of his face before stabbing it with a bomb. The gulf between these three-hour sensory slugfests and their target audience is wider than the space between Michael Bay's ears.

But love 'em or hate 'em, and if you're reading this there's a pretty good chance you hate 'em, I don't see a reason to expect anything from this new Transformers but more of the same. Mark Wahlberg is a few steps up from The Beef's verbal diarrhea, so maybe that'll count for something. 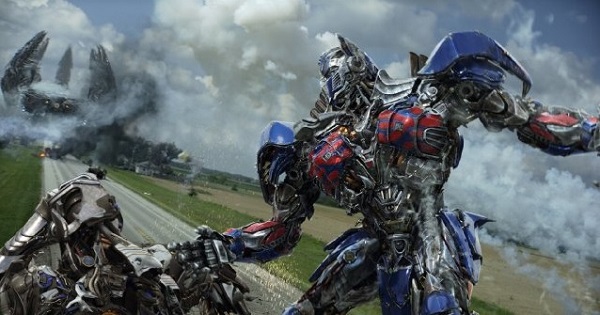 REALITY: Transformers: Age of Extinction is incoherent beyond all metrics of human understanding. Characters say things like "Honor to the end," only to lash out in horrific displays of violence twenty seconds later. Plot points occur that become wholly irrelevant as soon as the next scene starts. The film's generally serious tone is frequently undercut by jokes that make sense to no one. But at the same time, this is somehow the most lucid, tolerable and downright entertaining Transformers film yet. I realize that's kind of like saying Load is Metallica's most radio-friendly album, but hey, we work with what they give us.

After the Decepticons nearly dropped a planet on Chicago in Dark of the Moon, the US government responded by hunting down all transformers almost to the point of (*ahem*) extinction. Five years later, inventor Cade Yeager (Mark Wahlberg) salvages a demolished semi-truck he found in an abandoned movie theater. He takes it home to his farm for scrap metal, where he discovers it is none other than Optimus Prime. At that very moment the feds arrive and promptly blow up Cade's house, sending Cade, his daughter Tessa (Nicola Peltz), their buddy Lucas (TJ Miller) and Tessa's secret boyfriend Shane (Jack Reynor) on the run.

The feds are in league with a transformer named Lockdown, who kills his targets with a giant cannon that transforms out of his face. Lockdown answers to CIA nutjob Harold Attinger (Hollywood nutjob Kelsey Grammer), who in turn offers up their victims to tech mogul Joshua Joyce (Stanley Tucci), who uses the scraps to build his own private army of transformers. None of these names really matter, of course. Even after consulting IMDb and writing them down just now, I still couldn't tell you one from the other. The only name that matters is Cade Yeager, because it's hilarious that someone thought a person would name their child Cade Yeager. 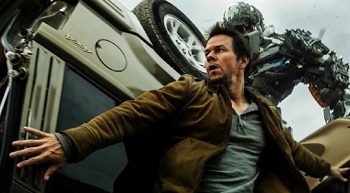 "No dating giant robots until after college!"Speaking of which, behind the brain-melting action and a plot that ultimately goes nowhere, Cade is the film's third biggest problem. Cade is your typical overprotective father, but this aspect of his character is written to a ridiculous extreme. "No boys until after graduation," he barks at his daughter, who graduates from high school in a week. This one weirdly unbreakable rule causes him to act completely skeeved out whenever Tessa and Shane so much as hold hands in front of him. He acts like a nine-year-old who thinks love is totally gross, because I guess that's still who they're making these movies for, even if they clearly aren't. His puritanical refusal to let his daughter be her own person is an irredeemable scar on a character who is otherwise a thousand times more relatable than Sam "Nononono" Witwicky.

In one scene, Cade discovers that his seventeen-year-old daughter's boyfriend is twenty years old. Right before he breaks the kid's face with a couple good vibrations, Shane whips out a laminated card with a "Romeo & Juliet" law printed on it. He literally has a "Get Out of Statutory Rape Free" card, and Cade just throws up his hands like "Welp, I guess the law's the law." He constantly threatens to murder the kid once their ordeal is over, but after the movie ends, I bet he doesn't so much as poke Shane in the eye.

After establishing the Yeager clan and our villains (Grammer and Tucci are the series' best human villains by a country mile), the film returns to the business of transforming robots. Backing up Optimus and Bumblebee are Hound, Crosshairs and Drift. Again, none of those names are important. You'll know them in the film as the one voiced by John Goodman, the green one that wears a trenchcoat for some reason, and the samurai stereotype voiced by Ken Watanabe. That last one seems kind of racist, but Drift doesn't even transform into a car; he's a helicopter. Can helicopters drift? I don't know. I trust Michael Bay knows more about how to be racist in movies than I do.

I can't tell if the robots are becoming easier to identify, or if I've just been conditioned to decode all the nonsensical moving parts. Either way, Age of Extinction decides to give us a break and introduces transformers that skip all the actual transforming. Joyce's proprietary robots shapeshift by turning into a mass of floating cubes that can turn into anything. From handguns to My Little Ponies (yup) to hyper-expensive sports cars and transformers, these things feel like the ultimate cheat in a series that already cheats like it's taking place during The Purge. This is how the film introduces Galvatron, by the way, if that name means anything to you. Joyce screams to no one in particular, "I modeled Galvatron after Optimus Prime! WHY DOES IT KEEP LOOKING LIKE MEGATRON!?" 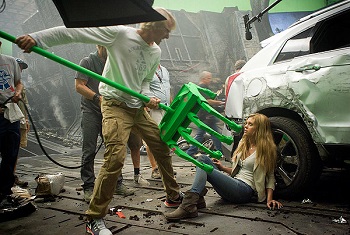 $200 million, and Michael Bay still does everything himself.Bay's style is undeniably more tolerable this time around, and Ehren Kruger's story takes a few legitimately interesting turns (even lifting whole beats from Prometheus, of all things), but the film's ultimate undoing is that it's just so goddamn long. I might have called Age of Extinction a minor success at the two-hour mark. Still nonsensical and borderline psychotic, but at least watchable. It's that final act that annihilates any built-up goodwill. Forty-five minutes of laser blasts, dinobots and sensory skullfucking all but destroy an otherwise much-needed course correction for this nightmare of a franchise.

Here's the absolute best thing I can say about Age of Extinction: A mom and her two kids showed up right as the movie started and couldn't find three seats together, so she took their blanket and jackets and made camp on the steps right next to me. The kids fell asleep almost immediately, so their mom and I spent the next three hours cracking wise and making fun of Stanley Tucci until the credits rolled.

I enjoyed that. It was fun.

MINORITY REPORTS: I'm not surprised. How are kids who no longer have the attention span for the toy gonna endure three hours of this shit? - Sean "Keanu Grieves" Hanson