REALITY: I'm trying really hard to imagine writer/director/comedian/weirdo Bobcat Goldthwait at the pitch meeting, laying out his plans for a relatively serious found-footage movie about Bigfoot in that trademark hyenic trilling... and I crack before the scene solidifies. What's amazing is that Goldthwait, a newcomer to horror at 51, has crafted a genre picture that, you know, does what it does and does it well, even if it only clocks in at eighty minutes with credits.

The premise is simple: Jim (Bryce Johnson) and Kelly (Alexie Gilmore) are making a documentary about their search for the California site where Roger Patterson and Robert Gimlin produced their now-debunked footage of Bigfoot. As documentarians, they're not very serious. Neither one is adept at cinematography, they spend more time cracking jokes or arguing about her skepticism towards Bigfoot, and Kelly makes it clear that, for her, this trip is a birthday present for Jim, who's dreamed of hunting for Bigfoot since childhood. 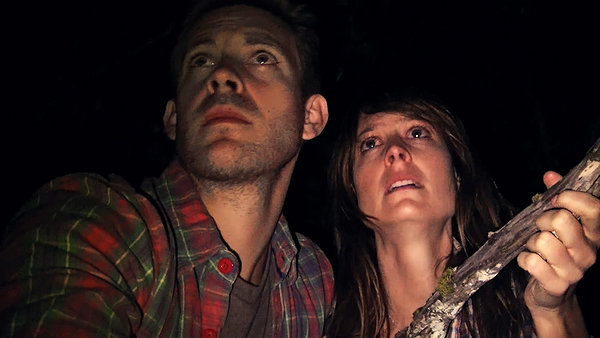 Because Goldthwait is a comedian, Willow Creek's dialogue is wittier than most. And because the film is divided into two halves, Willow Creek might seem uneven - maybe even pointless - during the first part, as Kelly and Jim bring their big-city wit to bear on a small town that runs on tourism dollars. They mock the ubiquitous Bigfoot murals and interview a singer-songwriter whose entire shtick appears to be "I sing songs about Bigfoot." The interviews run a little long. You might find it a little boring. But there's a point to this: Willow Creek is exploring how documentaries are constructed, how a ten-minute conversation is pared down to sound bites - or not, depending on the documentarians' skill.

There's also a point to the pacing. Nowadays, horror films tend to fire on all cylinders because the filmmakers are worried they'll lose their audiences before the final act. I'm not opposed to that approach; Insidious, Drag Me to Hell and Dark Skies hit the ground running, and they're better films for it. But I'm also a fan of the build. And once Jim and Kelly go traipsing into the woods, Willow Creek picks up the pace until we arrive at the film's centerpiece, a nineteen-minute unbroken take that's an object lesson in the value of restraint and what can be accomplished almost solely through sound. The horror sneaks up on you and then you can almost hear the ratchet clicking. 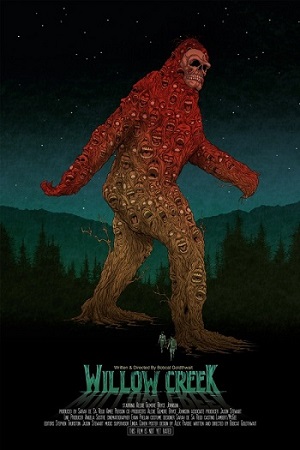 Fuck you, Slenderman.What Goldthwait has cooked up here is a revision of The Blair Witch Project, retaining the "lost in the woods" narrative and jarring ending while ditching the snot ropes, unlikable protagonists and criminally stupid decision-making. Despite the air of superiority they bring to rural Northern California, we like Kelly and Jim, who are three-dimensional characters with three-dimensional problems: They're on the verge of engagement, but he's kind of a dick and she's a budding actress who wants to move to Hollywood even if he won't follow her. Unlike The Blair Witch Project's Heather Donahue, who dives headfirst from aloofness into a pool of histrionics, Kelly's move from skepticism to fear is better-drawn and less dependent on shitty assumptions about women.

The film's biggest flaw, aside from some unconvincing acting when the "locals" are relating their encounters with Bigfoot, is subjective. The cinematography may accurately simulate how amateur documentarians would hold the camera by its strap while running through the woods, but knowing that doesn't make it easier on filmgoers who forgot to take their Dramamine. And those sequences run long, as the camera jerks from twig to twig without any points of reference to stabilize the frame. (This movie's so dependent on sound, it could work as a radio play, so if you need to close your eyes to keep from puking, go right ahead.)

But Willow Creek sparkles when it's reconfiguring horror's traditional gender roles. By making Kelly the skeptic and Jim the believer, Willow Creek recalls The X-Files... and little else. As groundbreaking as that dynamic seemed in the '90s, the doubting woman was a fluke. By assigning Kelly a goal of her own and the independence to follow that goal with or without Jim's support, Willow Creek seems more progressive than it should in 2014, and it's punctuated by an ending that quietly spells out the disparity in worst fates imaginable for men and women who venture into the wild unknown looking for an encounter with a monstrous biped. Hint: Neither involves ripping open a bag of Jack Link's Original Beef Jerky.

MINORITY REPORT: In many ways, this really is the best thing that could have happened after God Bless America. - Joseph "Jay Dub" Wade