Deliver Us from Evil; Tammy; Earth to Echo; A Hard Day's Night

It's a sad day when our Movie of the Week is a reissue of a film that's fifty years old, but there you have it: Sean "Keanu Grieves" Hanson exorcises the turd demon at the heart of Deliver Us from Evil, Tammy is teaching Joseph "Jay Dub" Wade how to hate Melissa McCarthy, Martin R. "Vargo" Schneider laments the fact that nobody will ever watch Earth to Echo, and Ashley "TwistedLadder" Herald explains why A Hard Day's Night, the 1964 equivalent of Justin Bieber: Believe, stands the test of time.

Deliver Us from Evil

REALITY: It's nigh-impossible to find credible, objective biographical information on Ralph Sarchie, the NYPD officer/demonologist who wrote Ralph Sarchie Is a Fucking Badass Who Kills Demons and Gets Mad Pussy, the "actual accounts of an NYPD sergeant" by which the more generically titled Deliver Us from Evil is "inspired." Wikipedia warns that its article on Ralph Sarchie may have been written by someone close to Ralph Sarchie, and Amazon reviewers are suspiciously warm towards his book, comparing it to the work of Ed and Lorraine Warren (not exactly a ringing endorsement for skeptical viewers). Responding to an IMDb forums post that initially questions those accounts' veracity, one crackpot gives us the straight dope: "Humans are susceptible to demon possession. This is not a theory. This is fact." Can't argue with that logic. 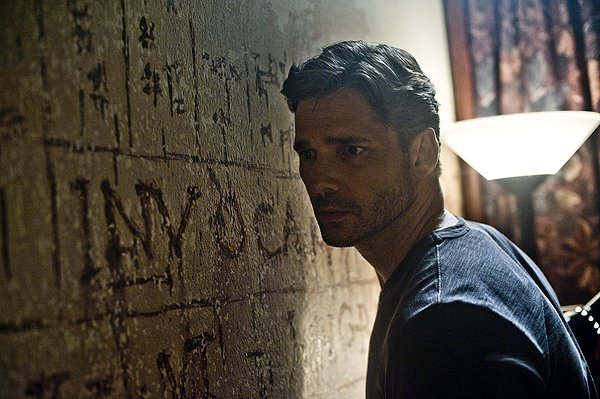 WHAT DOES THE WALL SAY?!

Really, "inspired by images, scenes and plots from other movies" would have been a better tagline, because, as depicted in Deliver Us from Evil, Ralph Sarchie's accounts have a lot in common with The Exorcist, Se7en, Fallen, Poltergeist, one of the Relentless sequels, any film in which Oliver Stone uses varying film stocks to indicate a change in era or perspective, Jumanji... I mean, ninety percent of Deliver Us from Evil is homage or plagiarism. That's not necessarily a criticism. Horror is an incredibly self-referential genre, and its directors have made some great films from elements of their predecessors. (See: Scream, The Cabin in the Woods, any good slasher film after Halloween and The House of the Devil.) But Deliver Us from Evil, co-writer/director Scott Derrickson's fourth horror film since 2000's Hellraiser: Inferno, is shitty because a) it stretches our credulity to the breaking point, which is a grave error for a film purportedly based on "actual accounts," b) the "actual" is unnecessary unless "potential accounts of an NYPD sergeant" was ever in the running, and c) Derrickson can't even reconfigure those preexisting elements in a meaningful or compelling way.

Beyond this, I can't discuss Deliver Us from Evil without spoilers, so if you're going to ignore conventional wisdom and venture to see this pile of shit, you might want to stop reading. Be warned: This film's IMDb rating is sinking faster than a dead baby in the Hudson River, which is an appropriate reference given the movie's content; critics who posted scathing reviews of Deliver Us from Evil before Wednesday received requests from the studio to pull them until they could sucker at least one flock of filmgoers on opening night; and my own theatergoing experience was marked by peals of inappropriate laughter and walkouts. Do you really want to give these people your money? 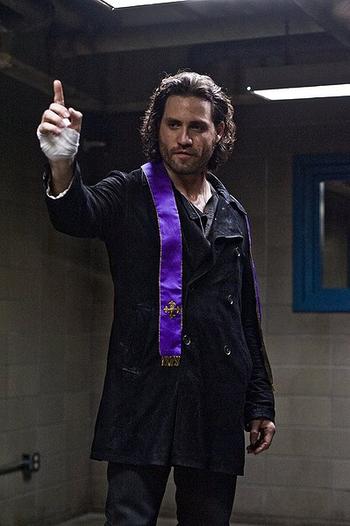 Does this smell like altar boy to you?God, I hope not, because Deliver Us from Evil begins unraveling the minute we meet Ralph Sarchie (Eric Bana) and his partner Butler (Joel McHale, who steals his scenes) as they respond to a call on the basis of Ralph Sarchie's badass intuition (his partners at the NYPD call it his "radar," as we're constantly reminded, but we should probably call it a "bloodlust," a "death wish" or "a need to dispense excessive force") and resolve a domestic dispute between an Iraq veteran who has seen Some Shit® and his battered wife. One thing leads to another, and soon Butler's knife-fighting this Marine until Ralph Sarchie grabs him by the collar, slams him against the hood of his SUV and punches him in the face until Butler intervenes, reminding Ralph Sarchie that he should go easy on this guy because he's a veteran - not because Ralph Sarchie's a cop or this guy's a citizen, mind you, but because he's a veteran. That's a big clue to Deliver Us from Evil's ideology. For a movie based on actual accounts of NYPD Sgt. Ralph Sarchie (who also served as the film's technical advisor), Deliver Us from Evil sure goes out of its way to confirm the Occupy movement's worst fears regarding police. "Yes, we are brutal fascists," Deliver Us from Evil says, "but at least we support our troops."

Next up for Ralph Sarchie and Butler, who's never given a first name: a call at the Brooklyn Zoo, where Ralph Sarchie and Butler encounter a woman who speaks entirely in lyrics by The Doors. Ralph Sarchie follows a potential witness into the lions' cage, where Ralph Sarchie, as only a badass named Ralph Sarchie would, knows exactly how to handle two lions, by backing away slowly and insisting Butler not shoot the precious lions. Because Ralph Sarchie only acts in animals' best interests. Then he goes home, bangs his wife (Olivia Munn) and sees his daughter (Lulu Wilson) off to school because he's a family man who also knows how to put penis to vagina and make that morning magic happen. But he senses there's a connection between the abusive Marine, whose nails are all fucked up; the crazy woman who speaks in Doors lyrics, whose nails are all fucked up; and the guy in the lions' cage, whose nails were probably fucked up - but he was definitely wearing makeup. This is confirmed when Ralph Sarchie meets Mendoza (Édgar Ramírez), who lectures him about "primary evil" even though he's one of those cool priests who wears a leather jacket instead of a starched collar, chain-smokes cigarettes and slugs whiskey shots to keep from relapsing into heroin abuse. Bear in mind, Mendoza is a character who exists in the same movie as Butler, an officer who dual-wields knives when fighting suspects in some bizarro version of New York City where it's always raining (at, like, torrential downpour levels) and nothing's well-lit. Based on actual accounts, my ass.

If you haven't picked up on it, I'm not using Ralph Sarchie's full name again and again and again because I have some fondness for repetition (although I do). I'm doing this because Deliver Us from Evil trusts audiences so little, it spells out every plot point in duplicate. "He's a demon who can possess people," Mendoza says at one point. "So what you're saying is he's a demon who can possess people?" Ralph Sarchie responds. This movie is a full two hours because it leaves nothing to imagination, subtext or "hey what'd I miss while I was peeing?" This is a movie that's so goddamned obvious, it would fit nicely in the New Christian canon if not for frequent instances of surprisingly graphic violence. Halfway through, we learn Ralph Sarchie has strayed from the church. Why? Because he beat a pedophile to death and felt a twinge of remorse. And in case we have qualms about rooting for a protagonist who beats suspects to death with his bare fucking hands, the movie tells us three things: the pedophile's name was Marvin Scrimm (or something similarly sleazy), he raped and murdered eleven girls (at least one of whom was younger than six), and there was DNA evidence connecting him to each of the murders. Who needs the court system when you have Ralph Sarchie? 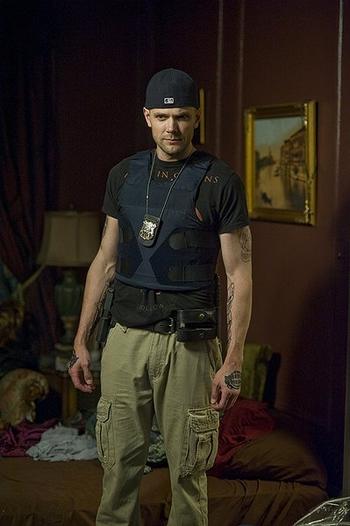 Jeff Winger never looked this sexy.Yet-to-be-convicted pedophiles and wife-beaters catch the brunt of this film's animosity, but at least the women fare slightly better. Why, they get to be a homemaker, a mental patient, a six-year-old girl, or a cop with only one line of dialogue (she congratulates Ralph Sarchie for catching "Marvin the Molester")! In the one scene that approaches emotional authenticity, Ralph Sarchie yells at his daughter, which is way out of character for New York City's #1 Dad. When his wife expresses her surprise, he tells her about all the fucked-up shit he saw that week: dead babies, domestic violence, ritual murder - you know, the usual. "Don't worry," she assures him, "I'll talk to her." It's the World War Z pitfall, presenting your most significant female character as the person who gets to stay home and take care of the kids, except Deliver Us from Evil doesn't even feature an Israeli soldier who loses an arm while fighting zombies to bolster its feminist cred. Bonus: The most memorable black character exists only to provide a few seconds of comic relief.

For all of these reasons and more (an abundance of exposition, a miscalculated reliance on The Doors' decidedly un-creepy music to serve as creepy music, ridiculous accents that run the gamut from New Yawk to Castillan/Hungarian), Deliver Us from Evil feels like a movie from a bygone era - 2000, for instance, when every serial-killer flick was ripping off Se7en's hermetic gloom while Bless the Child and Lost Souls spearheaded a new wave of shitty Satanic horror. This is an ugly, toxic movie - proof that The Conjuring's success has given new life to the "based on..." horror film, from which narcissistic con artists (who see spirits and dollar signs where any semi-competent psychologist would see trauma) profit - and a step back even for Derrickson, whose Sinister was the closest he's come to making a good horror film after fourteen years in the industry. That someone could spend fourteen years doing anything without significant and lasting improvement is the real real-life horror story behind the scenes of Deliver Us from Evil.

The rest is just bullshit.

MINORITY REPORT: I don't know about you, but no American band fills me with existential dread quite like The Doors. My Fight-or-Flight response kicks in whenever I hear "Roadhouse Blues" and oh Jesus, it's 2008 all over again. Then again, that's more due to memories of a crummy relationship than demonic possession. I may have a bias here. - Joseph "Jay Dub" Wade