EXPECTATIONS: I admit, I'm a sucker for boxing movies. To this day, I believe I'm the only person who has ever seen Resurrecting the Champ. As a result, I'm going to try to refrain from the comparisons to Rocky that all of my brethren in the review community seem to be making. Seriously, why does everyone insist on calling this movie Rocky meets The Blind Side meets The Departed? If you have to use the word "meets" more than once, then your analogy wasn't very good to begin with. Let's just see if we can enjoy the movie for what it is: A showdown between Mark Wahlberg, who probably could beat you within an inch of your life, and Christian Bale, who probably would.

REALITY: I like Mark Wahlberg a lot, I really do. However, I wonder how many "old guy gets one last shot at sport" movies you are allowed to make before you become Kevin Costner. Fortunately, Wahlberg has a ways to go before someone suggests remaking The Postman with the titular character converted into a tough-talking Boston thug, so he can continue making movies about sports more interesting than baseball. The Fighter is set in the most 1986-looking version of 1993 I've ever seen, and tells the story of "Irish" Micky Ward (Wahlberg), an amateur boxer from a Boston suburb who is trying to turn pro, and his half-brother/trainer Dicky (Christian Bale), who is trying to smoke a lot of crack and ruin his brother's life. Under the thumb of his controlling mother (Melissa Leo), and influenced by his girlfriend Charlene (Amy Adams), Dicky struggles to find what's best for him and his career.

On a surface level, The Fighter seems like a film you've seen before, but the script handles some deeper levels, like drug addiction and the hypnotic urge to take care of one's family, even when it hurts you in the long run. In many ways, this is both a help and an hindrance to the film. While it gives many opportunities for powerful performances from each member of the cast (Melissa Leo and Jack McGee, who play Micky's parents, should both be more famous than they are), it also creates some pacing problems, because there's simply a lot of story to tell. After a strong and intriguing opening, the slowly paced second act lulls along, until you feel like you're watching a preachy "don't do drugs" PSA. Of course, this feeling sets in at the moment it's revealed that Dicky is the subject of a preachy "don't do drugs" PSA, so uh ... mission accomplished, I guess. 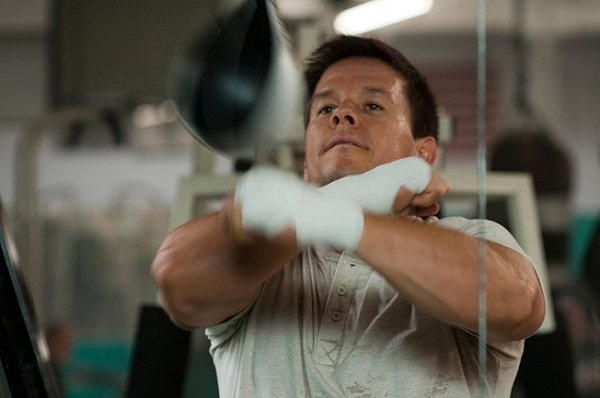 Mark works the speedball so fast, you can't even tell that's he keeps punching himself in the face.

This is basically the issue with criticizing The Fighter. It's a great film, but it's also a flawed film. For example, there are numerous attempts to humanize Micky's mother as something besides a one-note "mother knows best" villain, and they don't work. Quite frankly, when it comes to portraying a psychologically manipulative/abusive familial relationship, a Disney film with a smarmy lizard did it better two weeks ago. And yet, as I sat in the theater thinking, "I'm not enjoying this as much as I feel I should be," something interesting happened that I haven't felt in a movie in a long time. Right around the obligatory training montage, I was actually angry at the characters on the screen.

Somehow, despite all my (successful) attempts at finding flaws in this movie, everyone involved had made me enraptured in these peoples' plight, to the point where I was actually mad at what Micky's mother was doing to his life. I was genuinely angry at her white-trash daughters, or "vigilantes," as they're called in the film. Maybe it's because Melissa Leo absolutely nails the "self-righteous woman on the warpath" in those scenes. Or maybe I was just pissed that she caused Amy Adams to put her clothes back on, I don't know. The point is, I thought I was bored, but it turns out I was actually incredibly emotionally involved. I'm not even sure how that happens.

I think it's because this movie is, at its core, a story not about boxing, but about human life. Human life is sometimes a little slow and boring. Accepting this fact alleviates some of the film's issues. It's okay that by the end, the only character who's really changed is Dicky, because sometimes people don't change dramatically, they just adapt to each other. (Also, I've never been through any kind of hard-drug withdrawals in my life, but there's got to be a better way to show it on-screen than having a character writhe and sweat on top of bedsheets.) Even our hero, Micky, becomes a little more assertive, but at the end of the movie, he's as awkward and uncomfortable as he is at the beginning. That's okay, because it's true to character. Somehow these people are so real that we get dark humor in scenes that should be tragic. I sure as hell hope that was intentional.

Much like he did in Three Kings, director David O. Russell experiments with different types of cameras and uses them to great cinematic effect. He breaks up the monotony of a standard movie camera with the look and feel of early-cable-documentary-style camerawork, and with ESPN-type sports cameras for the fight scenes. We recognize that these are all very different styles of film, but Russell blends them seamlessly, so that you don't realize the camera has switched until it's been running for a few minutes, which adds to the realism that Russell is creating. Like finding a letter in the text of a novel, it's a fun and welcome break. There are other more traditional cinematographic tricks Russell employs, like a long opening shot following Micky from his brother's point of view, which suggest that The Fighter might be analyzed in Film 101 classes in a decade or so.

There's a scene in The Fighter where Charlene and Micky go see a foreign film in an upscale neighborhood. They don't know how to pronounce it, and the fancy-pants smart kid behind them corrects them, and says "The New York Times loved it. And the cinematography is supposed to be beautiful," to which Wahlberg replies "Oh yeah? Cool." and promptly falls asleep in the theater. It seems entirely out of place with the rest of the movie, as though Russell were inserting an unsubtle "This movie isn't for you, critics, it's for the common guy" message, which is a pretty smug-ass thing to say when you're making a movie so clearly designed for award-baiting and critical lauding.


The Fighter is chock-full of standard sports-movie emotional manipulation, but it's very, very good emotional manipulation. Maybe, much like the Stallone-film-which-must-not-be-named, The Fighter is a rare film that can be enjoyed and appreciated by all walks of life, and all levels of film connoisseur. If that's the case, then congrats, Mr. Russell, for breaking the critic/audience "us vs. them" mentality. But you don't need to be such a dick about it.

MINORITY REPORT: I was once a famous boxing practitioner, renowned the world over under the name "Eighteen punch Monty," on account of my impeccable record of defeating opponents with a total of eighteen punches. I later learned that I had been in exactly one fight and had merely dreamed the same thing over and over. It was also revealed that it was I who was defeated and not my opponent. It seems that the irreversible brain damage I suffered during that fight actually reversed many of my already-existing mental problems. - Montague "Legally Sane" Smythe