Well, it's an... interesting week to be sure. Firstly, Ian "Professor Clumsy" Maddison is pleasantly surprised to find that Iron Man 3 isn't as mind-numbingly terrible as he'd imagined. Following that is Martin R. "Vargo" Schneider's utter bafflement at having a Michael Bay movie be one of the best he's seen this year. Then Joseph "Jay Dub" Wade is a little put off by some issues with the otherwise excellent Mud. Finally, it's time for Vargo to tackle the winner of our most recent Readers' Choice Poll in which you kind and considerate people decided to force the poor lad to endure Postal.

EXPECTATIONS: I don't know if I've ever mentioned this before, but I don't much care for superhero movies, on the whole. We had some really good ones back in the day with Richard Donner's Superman and Tim Burton's Batman, then they hit their peak with Ang Lee's Hulk. Since then, the genre has become a mess of extremely formulaic and homogenous "world-building" with only a few notable exceptions (The Powerpuff Girls Movie, for example, is every bit as good as Batman).


The worst offenders are the ones that come from Marvel Studios. They lure you in with interesting directors, and then BOOM! You just watched Iron Man and it isn't pretty. And then they do it again and again, practically the exact same film every time until we end up with The Avengers. Surely that's it? Surely they can't churn another one out? Oh good, they did. Iron Man 3 has arrived. Here are a few things I am going to consider safe assumptions about Iron Man 3: 1) Its main plot contrivance will hinge on the hero's willingness to act, rather than his ability; 2) You will absolutely need to have seen every previous Marvel-related movie to understand what's going on; 3) The villain will attempt to misuse the hero's technological advances to his own ends; 4) I will hate it. 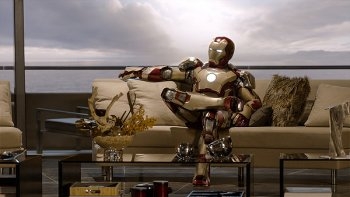 REALITY: IT'S THE BEST IRON MAN YET!

That's an exciting sentence, isn't it? You'll see something similar to that on the back of a DVD case in a few months time and I won't dispute it. It's absolutely true. Iron Man 3 is rather better than the meandering awkwardness of the first film, and it's a damn sight better than the confusing tedium of Iron Man 2. In answer to the safeness of my assumptions I will simply say this: 1) Yes; 2) Not quite, but close; 3) Oh boy, does he ever; 4) Not much, surprisingly.

Following the events of The Avengers, Tony Stark, a.k.a: "Iron Man" (Robert Downey Jr.) is suffering from anxiety and PTSD, which isn't actually relevant to the plot but is the first inkling that there might have been some interesting ideas here at some point. It seems that there's a terrorist called The Mandarin (Ben Kingsley) performing massive attacks on various U.S. targets, but Stark decides to just leave that to his old pal James Rhodes (Don Cheadle), who is basically also Iron Man, except he gets paid for it. Then there's Aldrich Killian (Guy Pearce), a scientist Tony snubbed at a party once who is now the head of a major rival to Stark Industries. He apparently just wants to show off his big brain to Tony's girlfriend Pepper Potts (Gwyneth Paltrow) in his elaborate plan to let the audience know that he's the real antagonist.

In the first act, Jon Favreau (as Stark's bodyguard) stumbles upon almost the entire plot of the movie, meaning the audience does too, and then he's gravely injured and slips into a coma for the rest of the film. That's a pretty clever in-joke, and Favreau is a good sport to have gone along with it after having made two extremely bad films in this very franchise. Of course he'd be happy to step aside and hand the reins to Shane Black, a director who, in spite of his rather limited list of credits, is considered something of a Hollywood legend with a surprisingly long list of calling cards. This is identifiably his film, and in the wake of Marvel's homogenisation campaign, it's the Marvel film that most closely resembles the work of a singular artist.

Statistically speaking, of course, it's still the safest way to travel.


However, there are definitely some issues here. The real problem with Iron Man 3 is that it never really comes together as a whole. There are lengthy dialogue scenes that play for laughs and serve little other purpose. Here's how Iron Man 3's dialogue scenes generally play out:

RHODES & PEPPER: We are concerned.

It doesn't help that a lot of these lighter scenes involve characters who offer no other significance. Take Rebecca Hall's character Maya, a scientist on Killian's research team who once had a fling with Tony. She exists so she can show up and provide some morally ambiguous connection to Tony's past and then promptly exit stage left having accomplished nothing. It feels almost like wasted screen time, if not for the thematic importance. Everything that happens in this film has an importance to the character of Tony Stark, but the plot and action actually get in the way.

Don't be so glum, Ben. You should have read the script before signing up.There's a scene early on where Tony has a nightmare about what happened in The Avengers (I can relate), and the Iron Man suit acts independently of him, threatening Pepper in her sleep. Throughout the film, our attention is often drawn to Jarvis, Tony's computer. Jarvis is little more than a disembodied voice that advises Tony to always do the opposite of what he inevitably does. Tony claims that the myriad super suits he makes are part of him, but they eventually start to look like separate entities and we begin to question just what Jarvis and Iron Man are in relation to Tony. Is Jarvis even real? Nobody else talks to him. It's so tantalisingly interesting, like a mega-budget remake of Cosmopolis fighting to get out, and yet it's all completely abandoned in the third act.


Or how about Tony's PTSD caused by falling through an alien wormhole? It seems to manifest itself as anxiety attacks only when small children ask him questions about it. Falling through a wormhole... small children... Tony's creations becoming separate entities... Maybe some subtext there about parenthood and growing up? Let's abandon this in favour of lots of explosions and the happiest ending we can muster because it's a Marvel film.

What Iron Man 3 really needs to do is give us less of what it thinks we want to see. Plot twists and massive explosions are all good fun, but there's something here that wants to breathe but is being stifled by the Disney Marvel formula. It's so very nearly compelling that it marks a step forward for the studio, and there are enough quality scenes that it's definitely worth watching. Ultimately, though, the film outstays its welcome and manages to disappoint even with its turgid origins. A step in the right direction, but a small step.

MINORITY REPORT: Kiss Kiss Bang Bang had Gay Perry to tell Downey, Jr. to shut up whenever he became too Downey, Jr. It sounds like Iron Man 3 desperately needs a Gay Perry, but I'm sure the last thing Disney/Marvel wanted in this film was more Shane Black. - Joseph "Jay Dub" Wade