This week is as rife with family-friendly comedies and last-minute Oscar-bait as this sentence is with hyphens. The Jack Black vehicle Gulliver's Travels promises to destroy the legacy of its source material, whereas the Coen brothers' True Grit seeks to honour its own. In third place comes Little Fockers, a stale helping of recycled shite.

EXPECTATIONS: Okay, I'll admit it. Last week, when Jay Dub and his guardian angel said I couldn't do his job, it got to me. It even made me a little "agitated and depressed". So this week, I was a man with a point to prove.

Through painstaking research, I picked a film guaranteed to be mind-breakingly horrible, just to show I can tough it out with the worst of them. Soon the world -- and by "the world" I mean "the 15 readers this column has" -- will see I am a force to be reckoned with when it comes to crappy-film-watching. If Mike Nelson were not already the Mike Nelson of bad movies, then I would be the Mike Nelson of bad movies. To Jay Dub, I say that Jack Black's obligatory "rigg-a-gigg-rigg-a-doo" shtick is as bad as any farting dog, if not worse. And to Gulliver's Travels, I say "Bring. It. On."

REALITY: Jay Dub, I think I owe you an apology.

Seriously, I was almost on board with this film, if only because I came into it with such incredibly low expectations. Jack Black is an okay choice to play a lovable loser like mail-room clerk Lemuel Gulliver. His role is the one he's always done, but that's almost acceptable by this point. You pay for a Jack Black movie, you're going to get Jack Black being Jack Black. And no, the plot doesn't make sense, especially since it hinges upon Gulliver going from being a mail-room clerk to a travel writer for a major New York newspaper entirely by asking for it.

That's okay, though, because it doesn't matter how Gulliver gets to the island, it just matters that he gets there, right? Everyone basically knows the story of Gulliver's Travels anyway; who cares that what we think of as Gulliver's Travels is actually only like the first 80 pages of the book? And sure, everyone kinda looks as though they have no idea what they're doing in this movie, and Billy Connelly can't remember whether he's supposed to have his accent, and it doesn't matter if Jason Segal remembers to do his or not because he can't do it anyway. That's all fine, because, really, who expects competent actors in a film like this, right you guys? Right? Please? 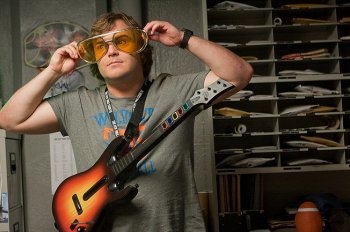 Ha! These glasses are comically huge!Gulliver's Travels is nothing if not honest about its terribleness. With my dignity on the line, I made excuses for every one of the film's problems. I was even willing to let it off the hook for literally becoming a video game advertisement by making Guitar Hero the focus of several shots. (Couples Retreat did this, too. In both cases, the game they were shilling was outdated before the movie was even released. I don't work in advertising, but you'd think they'd show a little foresight.) None of it mattered. I had embraced the crap, I was one with the crap. I was the crap. And it was glorious. I finally knew what it felt like to "turn off your brain." I chuckled thrice. Then it happened.

There's no easy way to say this, so I'll just come right out with it. There is a scene in Gulliver's Travels where Jack Black puts out a fire by peeing on it. This actually happens. There is a fire in the tiny castle, and Jack Black puts it out. With urine. At this point I almost walked out, figuring I could just write down that one sentence and turn it in as my review. I really don't even see the point in writing any more than this. Jack Black puts out a fire by peeing on it. If that sentence sounds appealing to you, if you're cool with this kind of scene in a "Family Entertainment" film, then by all means go see Gulliver's Travels. Be sure to let me know so that I can make it a point never to be in a room with you!

Maybe I'm being overly harsh here, because in the novel Gulliver actually does pee on a burning building. But the fact is, when you're not following the basic storyline at all anyway, you're not allowed to claim that defense. This isn't homage or reference to Jonathan Swift's character: This is Jack Black peeing because haha, pee. It's as if the writers tore through the entire book and decided to ignore everything else except that scene, because it was the one most likely to make five-year-old boys giggle. Which brings me to the other problem Gulliver's Travels has. It's not sure what it wants to be, or who it wants to appeal to. If it's supposed to be a kid's movie, and the only funny joke revolves around the word "lameass," then I'm not really sure what to think. Of course, we live in a world where cartoon chipmunks eat each other's poop, so I haven't known what to think for a long time. 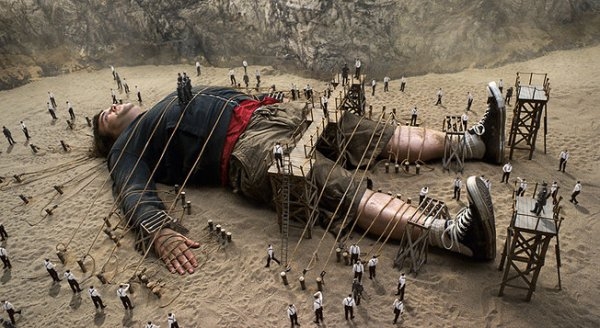 Oh no! I am comically huge! What bitter irony!

Jack Black's firehose aside (I'm so sorry), there is just no excuse for a movie this bad to be made. Most people are willing to give leeway to a family film with faults if it's fun enough, but the fact of the matter is, this movie isn't that fun. At all. Nor is it funny. It's just stupid, and while there is a place in the world for stupid comedy, there's an incredibly fine line between "stupid-clever" (The Stupids or Wayne's World) and "stupid-stupid" (Everything Pauly Shore has ever done). Basically, it takes a lot of smart people to make a stupid-clever movie, and Gulliver's Travels does not fit the bill. At the film's climax, Jack Black battles a giant robot. This is another thing that actually happens, twice. This is an incredibly dumb idea that could be awesome if done by the right people. Clearly these were not the right people.

As for the film's star, even Jack Black seems like he's sick of Jack Black by now. Two years ago, he played against type and made fun of actors who rest on their overblown characters in Tropic Thunder. Yet somehow, 2010-era Jack Black has become a parody of 2003-era Jack Black. The man is over 40. How much longer can he play air guitar and make widdledy-widdledy-woo noises at the screen? Somehow he's tricked audiences into seeing the top half of his ass in 3-D, so that's gotta count for something, I guess. But he can't really want that to be part of his legacy, can he?

The truth is, I was once willing to defend Jack Black. He's put in enough good work to show that he does have some talent underneath his faux rock-star gag. And because of my undying love for Nicolas Cage, I can understand an actor taking a fun role just for the money. But when we're at a point in a movie where the main character makes peace between two countries that have been feuding for centuries by singing Edwin Starr's "War" and doing somersaults (this also actually happens), I'm not entirely certain anyone's really earning their paychecks.

MINORITY REPORT: I was actually going to send Jay Dub along to this one, but considering the fact that the talking horses never made it into this adaptation, I didn't see much point. -Ian "ProfessorClumsy" Maddison