Are You There God? It's Me, Petey.

I hope I didn't piss you off with this update, God. You and I have had an off and on again relationship. On when I was younger, and all I knew was the faith of my family, which, with Catholic missionary paternal grandparents and Protestant missionary maternal grandparents, meant every family reunion felt like a jolly weekend in Belfast. Off when I hit puberty and Russia annexed my face for its rich oil reserves. Sure, it may not seem like much in the scheme of things, but I haven't the strength (or stupidity, depending on your point of view) of Job. In any case, I must admit I've begun to doubt your existence. I was illuminated fairly early by Japan's finest exports. Maybe it's shallow of me, but I still say that pubic hair on women is tangible evidence of the lack of a benevolent creator.

My budding agnosticism is appropriate, for though my parents named me Christopher, which means "Carrier of Christ." I always felt that sounded less like an exhortation of faith than a diagnosis of a disease. I'm sorry sir, but you've got the Jesus. Symptoms include persecution and crucifixion. On the upside, touching water turns it to wine, which is a good party trick, especially if it is a pool party and your friends are amphibious alcoholics.

On Scars and Stories

I didn't have the room to document this in my update, but I thought it was worth noting. I'm a big fan of good stories, including, somewhat shamefacedly, the Harry Potter series. Most people know that JK Rowling "borrowed" heavily from different literary traditions, recasting traditional archetypes in a easily digestible and immensely profitable form. But it was not until this update, when I was trying to figure out how exactly Jesus fought for our sins, that I realized she even stole from the greatest story ever told.

Behold, the Shroud of Turin, and the lightning shaped scar of the God Who Lived. 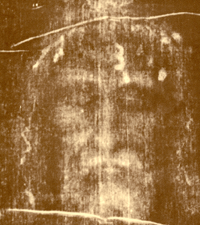 My belated apologies to anyone who was looking forward to a naturally funny DocEvil update and got an forced unfunny update from me. Thanks to Johnny Titanium for the opportunity though. Ever since I was fourteen I've wanted to do two things: write a frontpage update and do two girls at once, and though I might have preferred the other happen first I can't complain that this opportunity availed itself.

I also beg your patience with any formatting errors. Despite the best efforts of the coder and I, the SA CMS still hates all Mac browsers. I guess Apple is too busy changing the way teenage girls text to try and make sure, you know, everything works right.

Thanks to Lowtax for the Lunchables image and buddy for the MSpaint mastery. Also Pantsfish and TheGoblin for tearing stuff up so I could try to rebuild it--with middling success--and my proofreading crew for feedback. Also God, the big man up top, for all the laughs and boils and plagues and everything. You've always had a good sense of humor, and I like that in a deity.