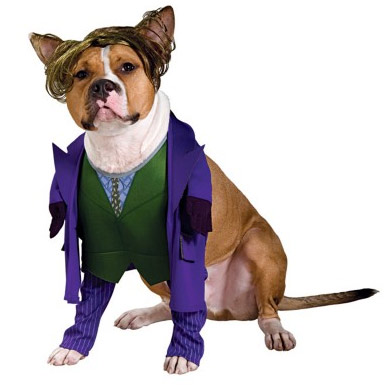 It's all fun and games with you, isn't it?

Trying to get The Joker to behave is like trying to get a dog to wear a suit. Hmmm... But maybe you know a crazy pup that this suit suits! Included is a whacky Joker wig for doggies and a 100% polyester costume that includes the purple jacket with faux arms, screenprinted shirt made to look like The Joker's vest, dress shirt, and tie, and funny pin-striped "pants" for your pooch's front legs. A getup that's sure to bring out the clown in your Joker!

Dr. Thorpe: Hey there. I'm glad to see we're starting this off with a bang: huge Hollywood movie tie-in! I think this shit is even officially licensed.

Zack: Isn't that a pitbull? It would be great if this dapper dog mauled a child. "Yes, my child's fingers were bitten off by the Joker."

Dr. Thorpe: It would be great if any dog mauled a child, but this one especially so.

Zack: I mean, if your child is going to be mauled, you would prefer them to be mauled by a well-dressed dog, surely.

Dr. Thorpe: OK, ready for my big joke? Check this out: You know what the difference between this dog and the Joker is? Lipstick.

Dr. Thorpe: So, by the principle of modus ponens, this means that the only difference between Sarah Palin and The Joker is hockey.

Zack: Makes sense to me, Sarah Palin is surrounded by a gang of gun-wielding misanthropes up to mischief. Also known as The Republican Base.

Zack: Oh, I thought you were making a hipster reference to the band Modus Ponens.

Dr. Thorpe: I think you're making that band up, because I've heard of every band and that's not one of them.

Zack: Every cool person and music hipster has heard of Modus Ponens. I thought you were...I'm so sorry...

Dr. Thorpe: First of all, you listen to Mike Patton. Secondly, let's get back to this fucking dog. Check out the awesome description on this thing: "Trying to get The Joker to behave is like trying to get a dog to wear a suit. Hmmm... But maybe you know a crazy pup that this suit suits!"

Zack: I bet this this suit suits Morrissey. And people who love Morrissey. People like you.

Dr. Thorpe: I wonder if the dude who created the officially licensed Dark Knight Dog Joker costume tells people that he worked on The Dark Knight.

Zack: Or maybe they had a whole team of people working on the costume. "I worked on The Dark Knight. My job? Oh, I put the fake little floppy arms on The Joker's costume."

Dr. Thorpe: "Oh, yeah, no big deal, just some wardrobe stuff and a little bit of writing. Writing for The Joker, you know. Good times, but I don't consider myself a big celebrity or anything. So what did you say my phone number was again? Oh, ha ha, silly me, I've got it right here, on my card. Ignore the part where it says 'Dog Costumer,' that's a little joke we do on the set of blockbuster films."