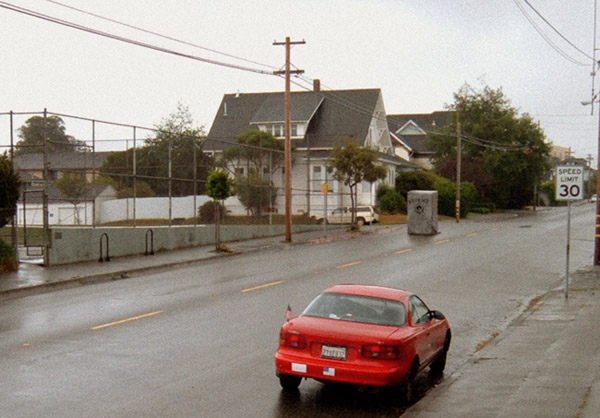 The Friend, photographed in 2004
A Visit From an Old Friend
Four dead as beloved local object makes the Old Town rounds.
By David Thorpe / The Times-Standard
On Wednesday, The Friend-- the mysterious local curiosity that has killed hundreds of locals over the last half century-- shuffled into Eureka for what some fear could be its final appearance.

"It's been gone for so long, I kind of figured it wouldn't be back," said Paul Mazotti, restaurateur in Eureka's historic Old Town. "But I was out there talking to my brother Don about getting some work done on the roof, and all of a sudden I see the old fellow come around the corner, honking and flailing its chain. It whipped Don in the back of the neck, and he was down right away. I bet he never even knew what happened. Then it just kept rambling along."

"They say The Friend is getting rusty in his old age, but it sure was quick with that chain," Mazotti said. "It was almost frightening, in a way."

The Friend first shuffled into town on October 19th, 1958. On that outing, it whipped nine people to death, causing a major local panic and attracting nationwide media attention. "I think people didn't know what to make of it at first," said Lawrence Grassley, an amateur Friend expert who's been studying it history and observing its habits for over thirty years. "It was so efficient, just one whip in the neck and it could kill a person. Folks were scared of it. They thought it was some kind of a monster or a Cold War thing. They even called the National Guard on it, but of course guns didn't do anything. Back then, people didn't know what it was or why it killed people. And I suppose they still don't."
The Friend continued to show up every few months, killing random Eurekans and defying any attempt to pacify or understand it. Over the years, the inevitability of The Friend's visits became a fact of Eureka life; by the mid sixties, opinion of the mystery monolith had shifted from fear and confusion to a sort of grudging acceptance. It was in 1966 that the Times-Standard first playfully referred to the object as "Our Friend," a name which stuck among locals. Sometime in 1967, an intrepid person painted the word "Friend" on the front of the object. The identity of the vandal-- and his or her fate-- remains unknown.

These days, The Friend is seen as an amusing local institution. The annual "Friends of The Friend" parade attracts almost two thousand revelers, many in homemade Friend costumes; as far as anyone knows, the real Friend has never made it to the event. 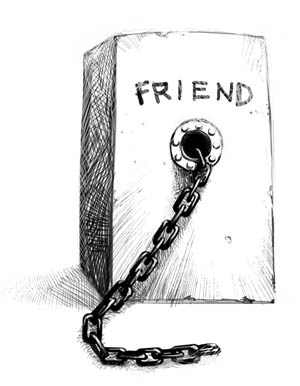 Though scientists have long since abandoned attempts to study the object, inquisitive locals persist. "We still don't know a lot about our Friend," Grassley said. "It doesn't like questions, and you can't get very close to it. It doesn't like having its picture taken. We do know a few things; It always shows up from the south, on E or F Street, and leaves to the east on 5th Street. You can't follow it to see where it goes, or it'll turn around and chase you away and probably kill you. It's never been to any other town, as far as we know. It mostly kills men. It likes dogs, or at least it likes following them around. Maybe it doesn't know how to kill them. Some people say it has some kind of personality, but I don't know about that."

To the dismay of many Eurekans, The Friend seems to be slowing down with age. "It's kind of sad," Old Town resident John Calvin told us. "Its honk is getting lower, and there's kind of a wheeze or a rattle to it. And I'm not sure if this is a good thing or a bad thing, but it's definitely killing a lot less people."

In its heyday, The Friend would show up almost every month to embark on shocking rampages, sometimes staying in town for six or seven hours and slaying upwards of a dozen people. The all-time record was set on October 26th, 1977, when The Friend killed 28 people, including then-mayor Walter Jones and noted sculptor Romano Gabriel. "Nowadays, it's a lot more sluggish. It shows up for three hours, maybe, and seems less driven in its terrible purpose," says Grassley. "In the last few years, I think the most people it's killed in a day is seven."

On its last visit in March of 2010, The Friend made its first visible stumble: it tripped on a curb outside the Lost Coast Brewery on 4th Street and lay helpless on the sidewalk for several hours, honking and flapping its chain. "It looked like a flipped tortoise," recalls Friendwatcher Lucas Morse. "Eventually, some guys from the Humboldt State rowing team took pity and came out and lifted it back up. It killed one of them and left. Everyone seemed pretty bummed out."

Perhaps, if indeed it has feelings, The Friend was humiliated. It didn't shuffle back into town until its Wednesday visit, when it made another embarrassing blunder: as it wandered down 2nd street, it fixated on a small tree and began whipping it. Patrons of Has Beans Coffee watched nervously as The Friend spent nearly half an hour tearing the tree to pieces with its chain. "I've never seen it try to kill a tree before," said Has Beans clerk and longtime Friend of the Friend Shauna Francis. "I think it thought the tree was a person. After a while it just honked a bunch and left."

"It seemed confused. I'm really scared that it's going to die or something."

Fumbles aside, The Friend still has the power to impress a tourist, as Santa Rosa native Ann Sylvester found out. "I was outside Los Bagels with my husband Bill, and we heard this terrible honking, like a sick goose. Before I knew what was what, this thing came out and flailed its chain at Bill and his whole head popped off like a champagne cork. It was terrible."

"But on the other hand, I'm glad I got to see The Friend, because people tell me he might not be around much longer. It was a very interesting experience."

Thanks to Russell Thorpe and Josh Gainsbrugh for art friendship.