Zackula: Baaaaaaarrfff! I bet you almost forgot we existed! But we do exist and we are proving it with a terrifying tour of titillating togs!

Dr. Thorpenstein: BooOOooOooo! Dare you enter the haunted mansion of Fashion SWAT's Scareoween Ghoultacular? You should have run when you had the chance, dear child... for Zackula and Dr. Thorpenstein's Monster are determined to harm your eyes with the ghastly horrors of the unclad female form!

Zackula: Thwwaaaack! Get a grip on our ghoulish guignol of gynecological get-ups! It's time for Halloween SWAT! 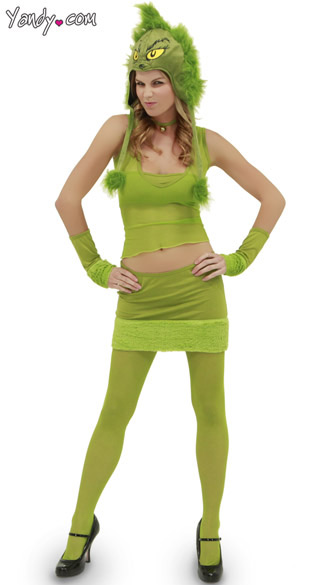 Dr. Thorpenstein: Ooh, I am going to steal your wiener from under the tree. Your Christmas will be ruined... with sex.

Zackula: I know when I see the slouching oddbody of the Grinch I think, "How can this dress make his hot boobs more prominent?"

Zackula: Although she isn't so much dressed as the Grinch as someone who killed the Grinch.

Dr. Thorpenstein: Ha ha ha, I will tell you what, buddy... THOSE things aren't three sizes too small!

Zackula: Dr. Seuss never really accounted for concealed carry in any of his stories. Whoville would be a lot more polite if everyone was packing heat.

Zackula: "I see you trying to steal my neighbor's Christmas. I am getting my AR-15 and coming out there no matter what the 911 lady says."

Dr. Thorpenstein: Don't you think The Grinch, being a clear parody of the conservative mind, is the one who would be carrying? He probably just would have had a way easier time stealing Christmas.

Zackula: No way is the Grinch Republican. He hates Christmas. He is more like an atheist trying to eliminate Christmas.

Dr. Thorpenstein: He heads up the Mt. Crumpit branch of the ACLU.

Zackula: Yertle the Turtle more accurately represents the entitlement of the right wing oligarchs and their self-destructive quest for power at the expense of turtles.

Zackula: A turtle is just way harder to make sexy than the Grinch.

Dr. Thorpenstein: Yeah, I have to say, they really pulled off the sexiness of this Grinch. I've never seen a sexier children's antagonist of joy.