Recently I watched Total Recall again and by god it made me want to write an article. I remember the first time I saw it I was just a puny child with a small brain and even then I thought I had figured out what happened in that movie. Apparently I was right and wrong! 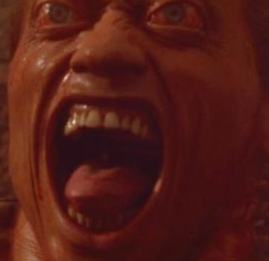 This movie was full of Arnold making this face.I was always under the impression that the entire movie was just him in the recall machine, starting after he goes ape shit and tries to choke out that motherfucking doctor. The doctor had it coming though because he was a smug son of a bitch and STONE COLD STEVE AUSTIN doesn't take shit from no body. Arnold is kind of like Stone Cold but not nearly as cool because he doesn't have as many beer bashes.

Anyhow, my step brother and I landed on the Sci Fi channel somehow and started watching a very edited version of Total Recall. Apparently you can rip off someone's arms, shove a pipe through a doctor's head, and cover the screen with blood but god help you if you want to say "shit" or "fuck you" on cable television. What kind of jackass sponsor (no I didn't mean censor) cares so much about profanity that they completely overlook violence that could compare to the most recent Rambo movie? Seinfield-like jokes aside, my step brother and I started discussing the plot of the movie and eventually I had to go to Wikipedia for my answers.

The only answer I could find was, "it can be interpreted in any way!" What kind of bullshit is this? So he could be dreaming the entire time (the WORST premise of a movie) or he could have actually been a secret agent that had his memory wiped and implanted but then went to "Rekall" and remembered it... sort of. There isn't much that I hate more than a movie telling me to think of the outcome. It's your fucking job to finish your movie, Director ASSHOLE COCKFACESTEIN. I absolutely hate when a movie is open ended and you decide what happens. I want closure GOD DAMNIT.

Apparently the director wanted to make a sequel where the events had actually happened but the sequel never came out so all we have are very few theories that are strong in the Total Recall community.

Total Recall 2: Back to the Recall

Douglas Quaid and his hooker girlfriend Melina settle down on Mars and get married. Since Quaid destroyed the organization that he used to be an agent for, he had to get a job as a construction worker to pay the bills. Disappointed by his mediocre life, Quaid visits a company named "Rememker" to pretend he is a secret agent again. However, on his car ride there he has a horrible wreck and becomes paralyzed from the neck down. He tries to get behind stem cell research but dies.

Stem cell reasearch dies with him and everyone pretty much forgets what Quaid did because the image of him as a paraplegic completely overshadowed his previous accomplishments. Cars are outlawed on Mars.

Total Recall 2: Enemy at the Recall

EdDouglas Quaid and his hooker girlfriend Melina join the rebels and Quaid becomes a sniper. Once he starts poppingNaziCohaggenite heads, they send in their best sniper, Ed Harris. Evenutally that one guy who played as Hellboy and got cut in half in Blade 2 gets shot in the head by Ed Harris when trying to jump from some ruined buildingsin Stalingradon Mars. It was pretty funny so Quaid and Harris join forces and the rest of the movie is a slapstick comedy about how they are enemies but friends. Harris keeps the apartment clean but Quaid makes it messy, you know, that kind of stuff.

Douglas Quaid and his hooker girlfriend Melina have a new baby. However, since she was a hooker they can't be sure who is the father. Quaid is torn between loving Melina and killing everyone she had ever slept with. This theory is the weakest since the movie would be split into at least four sequels since Melina was a dirty whore.

However, the plot for this movie advances to the point where Quaid kills off half the population of mars by ripping off their legs and shoving objects through their bodies. Melina cries a lot and tries to get Quaid to stop but is eventually killed by Quaid in an ironic plot twist that is a metaphor for anger and to not dwell on the past or some other lame shit. Quaid then thinks of killing himself but thinks better of it and retires to a Mars cow ranch.