We know you've been waiting with bated breath for the fourth entry into the Scream franchise. Well, wait no more, for it us upon us, causing conflicting emotions for Ian "ProfessorClumsy" Maddison. Also, Joseph "Jay Dub" Wade takes an objective look at Atlas Shrugged: Part 1, and Martin R. "Vargo" Schneider does a little soul surfing.

EXPECTATIONS: Let's pretend it's the '90s. Okay, I guess you're now fully prepared to watch a new Scream movie. Maybe that's a little unfair, Scream was an unusual experiment at the time, Wes Craven's tongue-in-cheek parody of exactly the kind of films that made Wes Craven a success in the first place. With belated sequels to long-forgotten franchises popping up everywhere, it seems like the perfect time to make a fourth Scream movie that parodies that very idea. Having said that, it could also be a desperate attempt for Craven to claw back some dignity after his previous embarrassment.

REALITY: I like to imagine that Craven's original idea for the ending of Scream 4 would take place in the actual cinema itself. The credits roll, and each audience member looks down to see a Ghostface killer lurking by their feet, and then they are brutally murdered. Just as the entire auditorium loses their lives, the on-screen credits are interrupted by a scene in which every member of the audience realises they were watching a movie of themselves watching Scream 4 the whole time and everybody carries on with their lives inside the movie screen. It's certainly the only way you can top the fiendishly clever and funny opening sequence, but I imagine the budget doesn't allow for these kinds of inter-dimensional shenanigans. 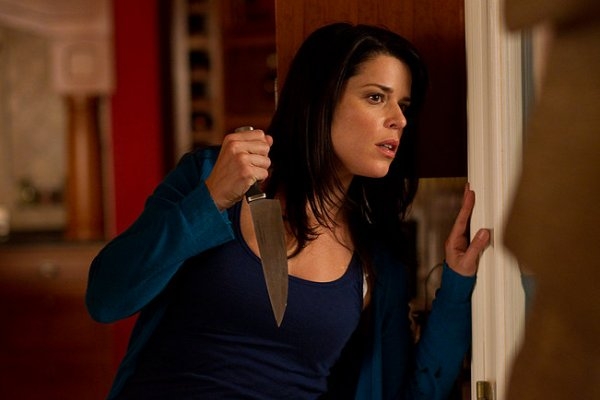 I know she's got a knife, but what you're thinking wouldn't make a lick of sense so stop thinking it.

In truth, nothing the film can muster comes close to what we see in the pre-title sequence. There are moments throughout that will raise a smile - some early gore and a welcome bout of silliness in the third act - but it's mostly a little dull and messily constructed. Ultimately, the saving grace of Scream 4 is also its biggest failing in that it is so self-aware that it threatens to invert space time and open a black hole. 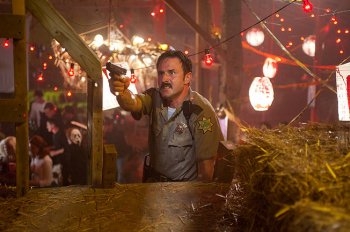 I never realised it before, but I have kind of missed old hamster-face.The story begins on the anniversary of the events of the first film. Sidney Prescott (Neve Campbell) returns home to Woodsboro to promote her new book. Here she finds things largely unchanged, Dewey (hamster-faced David Arquette) is now the sheriff and is married to the ever-present Gale (botox-faced Courteney Cox). Oh, and there's also a new generation of teenagers being terrorised by a serial killer in a ghost mask, chief among them Sidney's cousin Jill (Emma Roberts) and the obligatory horror movie geeks Kirby (Hayden Panettiere), Charlie (Rory Culkin) and Robbie (Erik Knudsen). The kids all sit down and attempt to solve the mystery by talking endlessly about movie cliches while the returning adults do... not much of interest.

Therein lies the first problem with Scream 4; the least interesting characters are the ones returning from the previous films. It's bad enough when your supposedly established stars are being out-acted by a bunch of kids, but when the script has nothing for them to do it starts to make you wonder why they even brought them back. Presumably they're there because they have to be. The fans would be livid if the lead characters didn't come back, but as this film can't decide if it wants to be a sequel or a remake (shriekuel or screamake, to use the parlance of the film), it probably could have done with losing Dewey and Gale, especially given that Courteney Cox is a terrible actress limited even more by her paralysed face. (Also, nobody cares about the marital affairs of characters whose real-life counterparts have already separated.)

Therein lies the second problem with Scream 4; it's such a bag of contradictions. The positives include impressive performances from Emma Roberts, who has thankfully inherited her father's ability to go from understated to outrageously daft in an instant; Erik Knudsen, who manages to make a very irritating character into something fun; and oddly enough, David Arquette, who is kind of compellingly strange even though his character has no real reason to be there. However, there's just so much bad in Courteney Cox, Hayden Panettiere, Rory Culkin (I guess there's more inherent talent in the Roberts family than the Culkin family) and Marley Shelton, who plays Dewey's deputy desperate to get into his pants and destroy his marriage. What an endearing character trait. 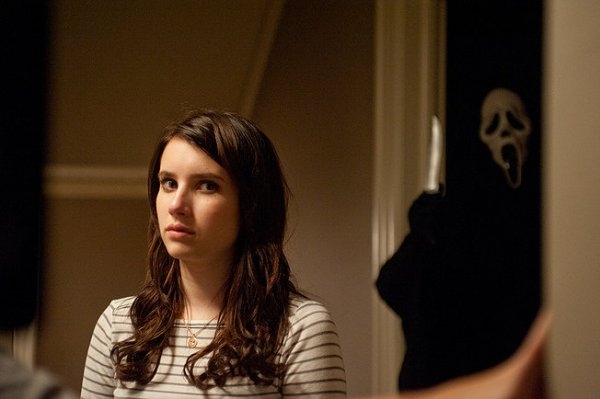 Don't want to alarm you, but there may be someone else in the room.

You could perhaps forgive an iffy cast and irritating characters due to the knowledge that you are guaranteed a high body count. The film certainly delivers here, especially early on as throats are slashed, people are disemboweled, corpses are tossed around like rag-dolls, and generally despicable and graphic murders occur. Just when you think Wes Craven has remembered what audiences want to see and is giving it to us full-on, everything starts to get a bit tame. Even with the fun silliness of the third act is marred by a reluctance to go ball-to-the-wall crazy with bloodthirsty violence. Considering how overly verbose a lot of the scenes are, I would have loved to see these characters get silenced with some beheadings, eye-gougings or other horrific methods; a knife to the bread-basket just doesn't cut it at this point. It's hardly an exciting escalation of violence.

The worst contradiction is in the film's treatment of its own material. Constant declarations of "this is a movie" and "this isn't a movie" just lead to a confusing quality in the film's tone. I know I'm watching a movie, the movie itself has to decide if it's supposed to represent the real world or it's about being a movie. One scene directly compares a murder to a scene from Shaun of the Dead, presumably to remind us that this isn't movie violence, even though it is. All it really does is remind us that Shaun of the Dead was much more effective as both a comedy and a horror film. 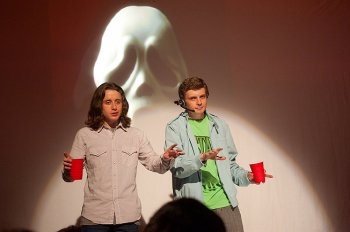 Strike a pose!That's what I mean when I say the film both suffers and gains from its self-awareness. It's essentially funny and refreshing for a film of this type to hold a mirror up to itself and say "Yes, I know I'm silly and cliched. That's what makes me a slasher film." But, the mirror is also an important element of what makes it a Scream film, which is perhaps why so much of the script is pre-occupied with it. Almost all of the dialogue is focused on avoiding cliches, embracing cliches, establishing rules, changing rules, throwing out the rules ad nauseum. The conflict of whether Scream 4 is a remake or sequel is actually a central plot point. Then, in the middle of all this, they try to take a satirical swipe at the modern obsession with mobile communication and living online. It really doesn't work and just feels like white noise in the middle of the film's central focus, which is already wavering in the wake of too much dialogue. The film only manages to make a succinct point in a small handful of scenes, one of which involves two deputies (Anthony Anderson and Adam Brody) discussing the plight of the police in horror films and the proper etiquette of not setting yourself up to be murdered.

You may be getting the impression that I can't really make my mind up about this film, and you'd be right. My feelings toward Scream 4 are as contradictory as its own presentation. For every terribly executed idea and over-written pop-culture reference, there's something in there that just works. There are scenes in Scream 4 that I will certainly remember fondly, but I might balk at the thought of actually sitting through the whole thing again. The best I can do in a situation like this is say go ahead and watch it. Consider that a recommendation of sorts. What's the worst that could happen? Apart from being murdered in the cinema?

MINORITY REPORT: Wait, you just listed every reason that people want to see this movie in the first place. How is this so hard for you? - Martin R. "Vargo" Schneider