Expedition to the Barrier Peaks is a cult favorite D&D adventure module written in 1979 by Gary Gygax. It is unique among D&D modules as the first of only a few to incorporate science fiction elements. In this case Gygax shoehorned in some Gamma Worlds, TSR's early take on science fiction role playing games. The adventure included an entire booklet of weird artwork plates for the Dungeon Master to show to the players when directed to do so by the text. 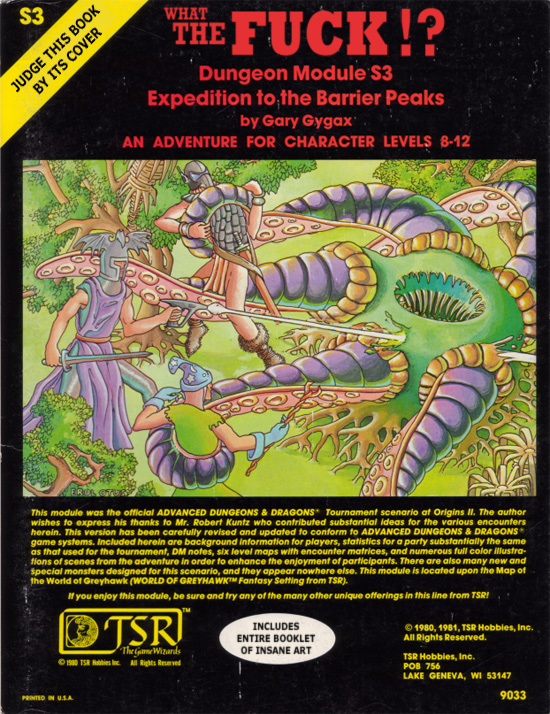 Zack: Expedition to the Barrier Peaks is the third most-requested D&D module behind Tomb of Horrors, which we covered, and Temple of Elemental Evil.

Steve: It looks amazing. Is that guy wearing a space helmet on the cover?

Zack: Yes, the plot of the adventure is that monsters have been menacing the Grand Duchy of Geoff so Duke Geoff or whoever hires a bunch of adventurers to go to the mountains where they're coming from some sinister door. The sinister door is a UFO that crash-landed many years earlier and the characters have to investigate it.

Steve: Whoa that is like the best plot line I have ever read. Seriously. That's even better than Damnation Alley. Are there aliens on the UFO?

Zack: The aliens are all dead from a virus, but there are androids and robots and monsters.

Steve: Well the cover rules hard. Who doesn't want to pop on a bat-wing helmet and blast an evil starfish with a death ray? Everybody wants that. Little babies and congressmen would be down for that sort of action.

Zack: Since this module took the unusual step of including a book of art for use with the adventure I thought this time around we might do something a little different. A little bit of role playing.

Zack: Nothing formal, I just thought we could play the adventure by sequentially working our way through the art book included.

Steve: Do I have to play a girl character?

Zack: What? No, just play whatever you want. We're not rolling dice. Just use your imagination.

Zack: Are you ready?

Steve: Darth Conans, Scourge of the Frost Lands, and his trusty companion Donkey are ready.