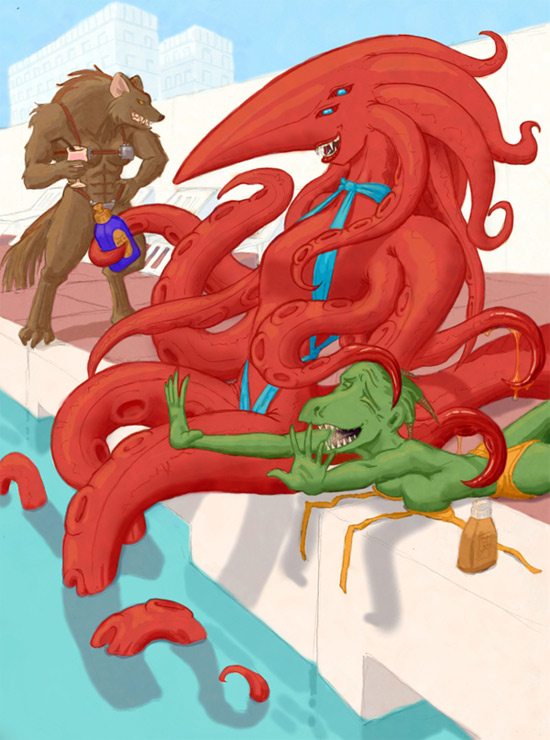 Description: Originally born in the eastern provinces, Shiren used to have a career as a undersecretary for a rather cruel Lich Lord who ran a busy and quite lucrative Dungeon just off the coast of Amn. Although her pay was largely commission based, Shiren's skills as an Enchanter and Illusionist earned her quite an income due to the bonuses garnered from adventurers she frequently lured (and did largely unspeakable things to) in her lair.

Soon she had squirreled away a small fortune in baubles and magical trinkets and it was not long before she had resigned her post, packed her belongings and retired to live a life of luxury in the eversunny holiday plane of B'ar-Ba'dos.

Still, old habits die hard, and it is quite often that screams of torment can be heard echoing long into the night from some holiday maker she's tempted back to her room using her wiles.

Steve: Alright, I admit it. I'd party with these babes. And if you can't admit that to yourself then you don't deserve to call yourself a man.

Zack: MDK 3 looks really weird. I wonder if the suit still has that tube parachute.

Zack: Oh, wait, this isn't a screenshot from MDK 3, it's just Steve getting taken in again by furries.

Steve: That horse man with the three penises was so nice and he said he stood to inherit millions, all I had to do was transfer a few thousand to his bank account.

Zack: You know what they say Steve, never turn your back on a drug and never wire money to a triple dicker horseman.