1981's Fiend Folio was the abysmal result of a failed merger between TSR and UK publisher Games Workshop. The majority of the monsters contained in the book are taken from the pages of White Dwarf, a gaming magazine still being published by GW. Whatever the original source of the monsters, TSR ultimately published Fiend Folio. It is their fault the world was subjected to a D&D monster book so bad it made Gary Gygax complain about random encounter tables. That's the D&D equivalent of making Cookie Monster sick of chocolate chips or Stephen Hawking sick of galaxies or orbits or whatever it is he likes. 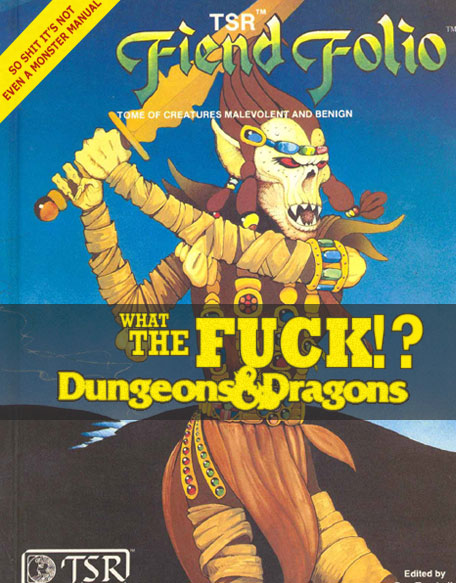 Zack: Here it is, folks. You can stop emailing about Fiend Folio.

Steve: The cover is way more accurate about the contents of the book than any of the other Monster Manuals: lots of spindly skeleton creatures.

Zack: That thing on the cover is not even close to being the stupidest thing in this book.

Steve: Aw, come on, Fiend Folio is a classic.

Steve: This is 1st Edition. They didn't introduce creature types until 3rd Edition.

Zack: Yuck. Can you imagine how nasty stick 'em mummy here is going to look by the time some adventurers come across him? He's going to look like a peppermint fished out of the world's grossest pocket.

Steve: I don't think he would be that bad.

Zack: What? He's living double-sided tape. About an hour of shuffling around a dungeon or a cave and he'd be covered in bats and skulls and otyughs. By definition ancient ruins are full of debris.

Steve: Yeah, but it says his voluntary secretions will break the adhesion.

Zack: So, what, he goes and stands in the corner all ashamed like a toddler filling the diaper? Squirts out some body juice and all the scrolls and wigs stuck to him fall off?

Steve: That's what it says. How else would he live otherwise? He'd just Katamari around a dungeon until he had every trap and treasure chest stuck to his body.

Steve: He's only semi intelligent though, so he'd probably set off all kinds of traps and get himself killed.