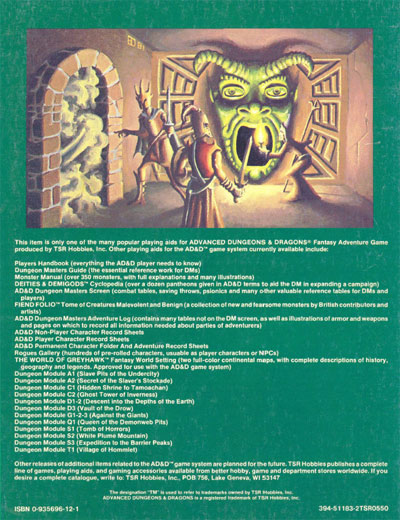 Zack: What a frigging nightmare.

Steve: It has the reputation for a reason.

Zack: I think the most sadistic part to me is that it's an adventure for levels 10 through 14. I mean, I could see being this unforgiving with new characters. You could kill them off gleefully, but it's just downright evil to knock off a group of people that have been playing with you for months.

Steve: Don't tell him I put this in here, but one time Keith was playing a character he really loved. It was this half-orc fighter named Deatharm. He had won the heart of a hot babe and built a castle and everything. Deatharm fell into a spike trap in a lame dungeon I was running and Keith cried. That character was only like level 8 or 9. Imagine if he were level 14.

Zack: Yeah, but how old were you at the time?

Zack: You and Keith should probably steer clear of Acererak.

Zack: Folks, if you have more suggestions for source books, modules, or even books from other gaming systems, we would love to hear them.

Steve: "We" being both of us. Put my email in this time.

Zack: You can email me or Steve your suggestions. Or just tell us how awesome we are.

Steve: Yeah, but if that Katie girl wants to email me we could set up a time and place to french. Let me know, babe.