Overview: A Japanese spy hunts Chinese insurrectionists, while unidentified combatants engage in unrelated skirmishes.
Directed By: Godfrey Ho, 1973
The Case For: Charismatically freakish Chinese bodybuilder Bolo Yeung makes a brief, unbilled cameo. A song from the score won an Academy Award, during its previous life as Isaac Hayes' "Theme from Shaft."
The Case Against: This film contains neither "blazing" nor any verifiable ninjas.

Godfrey Ho doesn't usually bother much with plots, not when he has so much random-guys-fighting footage with which to pad his films. Ho doesn't dispense with this practice in The Blazing Ninja, allotting considerable screen time to slap-heavy battles between unintroduced characters. However, he gets relatively ambitious with his central storyline, weaving a melancholic tale of star-crossed romance. It's like Romeo and Juliet meets a martial-arts film where hapless brawlers play ventriloquist's dummies to shrill, trained-parrot voice actors. 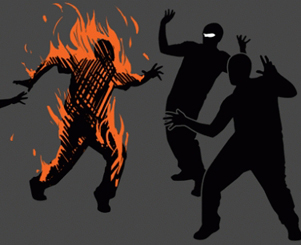 Nothing like this happens in this film.The Blazing Ninja ostensibly takes place in the late 1930s or early 1940s, when relations between China and Japan were at their ugliest. (Ho later exploited the era's wartime atrocities during his unauthorized Men Behind The Sun sequels.) In this film's anachronistic depiction of that time period, people wear '70s clothes, drive '70s cars and trigger funk from blaxploitation soundtracks whenever they start kung-fu fighting. Other customs unique to the fake '40s: Villains and heroic rebels alike celebrate every achievement with uproarious laughter, and members of clandestine militant organizations communicate by passing notes like grade-school girls.

In the movie's first scrutable scene, murderous bandits burst into guffaws after raising a toast "to our dear dead friend!" An interloping avenger snarls at these "ninja bastards." (No one in this film resembles a ninja in terms of appearance or skill, so viewers just have to follow the dialogue clues.) The ninja-basher shoves an attacker, which coincidentally causes a stiff dummy to fall flatly from a ledge.

The Resistance, which employs the anti-ninja, learns General Yashido, "the most famous spy in the whole of Japan," has been sent to stop its efforts. I'm confused when active spies are described as famous, given that their profession is steeped in secrecy. Isn't that like becoming a country's "best known undercover agent"?

The Resistance discusses the need to dispose of Yashido's bodyguard, then Ho abruptly cuts to a fight scene, which probably doesn't involve said bodyguard, because he'd likely be at his employer's side. Still, the conversation establishes reasonable faith in this scene's relevance, which by Ho's standards makes it a coherent transition. Usually, he just lets the transplanted battles serve as loading-screen distractions while he concocts his next plot machination. In this conflict, Bolo Yeung fights shirtless to reveal his hideous strength. Neither warrior lands many blows, so Bolo expresses genuine surprise when a foot connects with his face.

The rebels attempt to intercept Yoshido, but despite his renown, they must not know his face, because they don't detect that he sent henchmen to stage his arrival. They subdue the stand-ins, using tactics such as the "hold opponent's hand/foot while shaking vigorously" move, then enjoy a hearty chuckle.

The giddiness is short-lived, because they soon encounter the alleged master spy and ninja Yoshido, an elderly man with a tragicomic combover. He shoots a rebel, who limps through a field while Shaft scores his meager progress. (The late Isaac Hayes clearly intended that song to soundtrack bad motherfuckers, not bullet-addled gimps.) The rebels kidnap a doctor to force him to operate on their injured brother, but the trick backfires, as the impostor celebrates his clever ruse with the stinging insult "I'm not a real doctor, but you're really gay!" Replace "doctor" with "ninja" and "you're" with "I'm," and you've given this movie a perfect tagline.

Yoshido consults regularly with a Chinese diplomat whose moniker, at least when filtered through a screechy dubbed voice, sounds like the tender pet name Tongueman. They're old rivals, and now they represent countries in the midst of a harrowing conflict, so of course they establish a relationship of complete trust. Tongueman reveals his brother-in-law (the ninja-basher) belongs to the Resistance, so Yoshido imprisons him. Undaunted, he taunts his captor, warning "go away, or I'll throw up," because villainous ninjas live in constant fear of projectile vomit. It's like water to wicked witches. The Resistance rescues him and leaves another note, which, according to the voiceover, reads "You'll never get us now. Keep trying, though. Heh."

Tongueman, who was the leader of the Resistance all along, dispenses with Yoshido's lackeys , then the two engage in a redundant discussion about how they're going to go one-on-one, like back in the school days, yes, just like those days, when it was on-on-one. Yoshido's peons miss the subtle message and intervene. When one stabs Tongueman, Yoshido punches the offender and tells his opponent "I apologize." When Yoshido continues losing despite his opponent's gaping stab wound, a henchman shoots Tongueman in the knee, inciting the remarkable rant "You know what you've done? You've shot my dearest enemy!" While distraught at his beloved nemesis' plight, Yoshido has no qualms about accepting a tainted victory, so he orders Tongueman arrested. As he's dragged away, the spy grimaces in pained thought as his combover flaps portentously in the seaside wind. For never was a story of more woe, than this of Tongueman and his Yoshido.