The 90's success of "mature" White Wolf games like Vampire: The Masquerade prompted a boom of imitators attempting to bring "dark" and "adult" themes to role playing games. These attempts routinely failed, but 1995's Nightbane, Palladium's answer to the World of Darkness, lives on. Imagine if Rifts and Teenage Mutant Ninja Turtles combined in a world loosely based on Clive Barker's Nightbreed. You may be wondering, "How does that work?" It doesn't. Welcome to Nightbane. Suggested by reader Dan B. 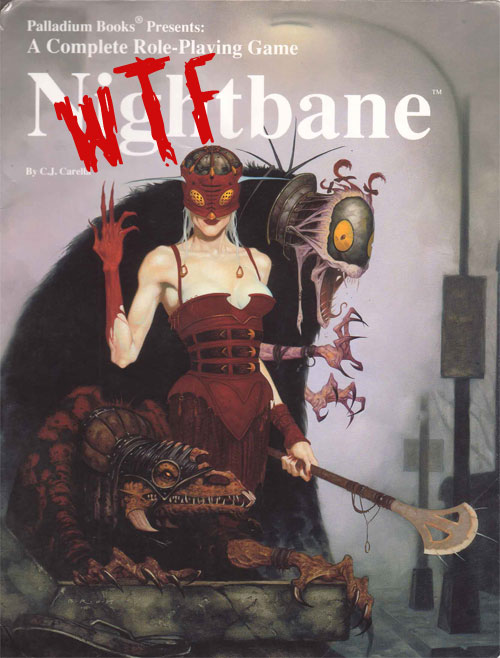 Zack: Nightbane: When Teenage Rifts Totally Wants You to Take Him Seriously, Mom.

Steve: I get the Rifts similarities, but this is like covert. It's like V only instead of lizard men from space, the overlords are secret demons from an evil dimension.

Zack: "The themes of this world are war and horror."

Zack: Some would argue those are also the themes of our world, but these people would never be playing a Palladium game.

Steve: How do martial arts fit into the themes?

Zack: War, my friend. I believe it was Sun Tzu who counseled: sweep the leg, Johnny.