Cheever explains his holy mission to the assorted freaks gathered in his rumpus room: "Kill as many as possible, rob the poorest man and fuck whatever moves." This business model foreshadows the organization's downfall. "Kill as many as possible" and "fuck whatever moves" work well as evil initiatives, and they're even largely interchangeable, though transposing them might result in lots of unproductive necrophilia. However, the "rob the poorest man" objective can lead only to insolvency, unless he's building some doomsday machine that runs on peddler change and fetid rags.

Catman and Gus arrive in time to halt the execution of one of the church's own members, but the woman they save doesn't appreciate the intervention. She sprays them with somnolence-inducing mist, and they awake in some sort of spray-painted Skee Ball diagram, with the words "Don't fuck with Cheever" around the outer circle. They remain unkilled, unfucked and unrobbed: Cheever's crew is struggling with its holy mission.

After this unsuccessful rescue, Catman mopes in his room, drawing sketches of the caliber you might expect from a cat with ink-dipped claws, when the television suddenly blares news about Cheever's 200,000-person event "Everybody Go to God." Apparently Catman has perfected his remote-control skills to the point where he can scan all visual-wave input and activate the television only when something relevant airs.

Catman and Gus encounter their informant bum on the way to Everybody Go to God. They recognize him though he's inexplicably wearing a long, curly wig. (He's probably in disguise because he learned plans to "rob the poorest man" are afoot.) Gus punches him, shouting that he owes him a cheeseburger and coffee, which indicates he doesn't really understand how food-in-exchange-for-information transactions work. The bum gives them a simple "that way" finger point, which is his answer to everything. 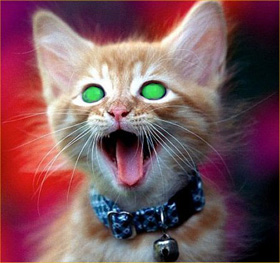 The radioactive cat remains at large.The Everybody Go to God rally apparently came up about 199,994 attendees short of Cheever's estimate, because the only guests are Cheever, a previously unseen Asian priest who's certainly not there for his sermonizing skills, and some jean-jacketed stragglers. Gus squares off against Medecin, while Catman (still in Sam's pedestrian attire) tussles with Asian Priest, who flashes some decent leg-sweep moves before Gus shoots him in the back. Cheever targets Catman (whose costume affixes to his body as he runs) with a festive projectile-launcher, which creates blue and orange colored-chalk clouds wherever its payload lands.

At last, Catman confronts Cheever man-on-man, glaring at him through his heretofore purposeless goggles. (Radioactive Man: "The goggles, they do nothing!") But just as the priest seems to be gaining an advantage, Catman removes a piece of plastic affixed to the bridge, and throws it at Cheever, puncturing his chest. (Raz from Psychonauts: "That is the purpose of the goggles.") "The End" flashes literally seconds later.

So, Catman saved humanity from the untold horrors of an Asian utopia, but we never really got to know Sam - his family tragedies, his motivation for vigilantism, his romantic entanglements. I'm completely fine with that. Sam's just a guy who likes softball, likes his CIA buddy Gus, and really, really likes aerobics programs. Being scratched by a radioactive cat is probably the only interesting thing that's happened to him, so why not start his story there instead of flashing back on his wasted life?

While I give Ho credit for preemptively rejecting the "serious superhero" protagonists of modern piffle such as Iron Man, I can't find any reason to condone his decision to punish Catman viewers with the momentum-killing exploits of Eye-Patch and the rest of those fucks. I'm sure that when Catman gets its deluxe-version DVD release, he'll realize his misstep and forcibly separate his prize achievement from its defective, Belial-in-Basket-Case brother.