Stevie, you have learned many Lessons, but part of preparing for Outside is learning to control your emotions. It surprises and saddens me to hear that several outbursts occurred during your processing of reading task 'Batman: The Cheetah Caper.' You will encounter many types of humans and animals, and you must not engage them with violence or loving touches unless explicitly Instructed to do so, even if they make you feel mad, or happy in a peculiar way. Please attempt to control yourself during your presentation.

My apologies, Instructors. I feel anger about Batman. He seems false and sickening. But I promise I will not hurt him if I see him Outside, and I will not injure you if you dress in his costume to test and deceive me. 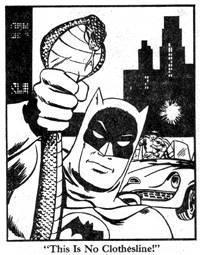 Batman is not a hero because of radioactive animals or liquids, or because he was born on a super planet where even the babies fight like brutes, or because he has been Instructed at a Facility. This snake could bite him on the naked-face part of his mask, and he would die like a normal, and the snake would not even chip a fang. Batman knows this snake is not a clothesline, but it does not take a special brain to tell the difference. The other heroes send Batman on tasks like this, but they laugh while he is gone, and say 'I wonder if Batman can solve the case of the hissing clothesline.' Batman makes a frustrated face. He's tired of this kind of job. 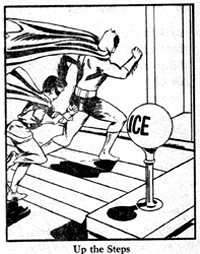 Batman and Batlad run up the stairs, though the sign warns they are covered with ice. He does this to train, because he needs practice on account of having no super abilities. Batlad doesn't have any powers, either, plus he is young and weak. He won't appear again in this story, because dangerous things happen, much too scary for a little human boy in shorts. He is the sort I should protect, but I do not like that he pretends to be a hero. When we are on the Outside, any people dressed as heroes who act like normals will be the last to be saved. I think it is only right to rescue the non-frauds first. But on this matter, I'm at the mercy of your wisdom. 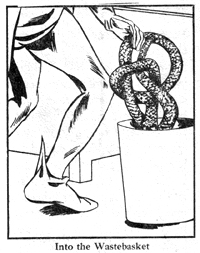 Batman throws the snake in the trash. This is why he is not trusted with real chores. A janitor will come to collect the garbage -- and probably even the janitor at the Hero Headquarters has more super powers than Batman, because the trash is radioactive, or at least maybe the janitor is a robot -- and the snake will bite him. 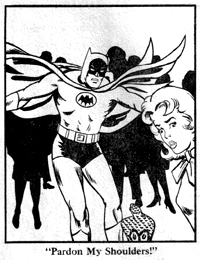 Batman says "Pardon my shoulders." He is vain, and he thinks people care that there is something wrong with that area, like that his uniform is too tight there, or that the cape bunches up, or there is a hole in the fabric. Or maybe he just wants the woman to look there, because he is strong from doing push-ups, a human exercise to make strength happen. The woman does not care about Batman's muscle body. She is frightened of the snake, which crawled out of the trash and still has blood or computer parts in its mouth. Or maybe this is a different snake. Batman gets the "clothesline" joke a lot. It is not right for the others to tease, I know. It is cruel. 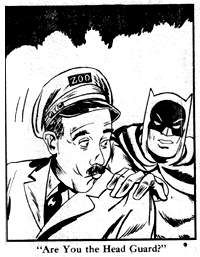 Batman is at the zoo, because he doesn't know where the snakes are coming from, and this is his guess. He has startled the Head Guard, who has a kissing mouth, because he kisses the animals when no one is there. He did not make the pucker for Batman, but Batman will always believe that he did, because he is very proud.