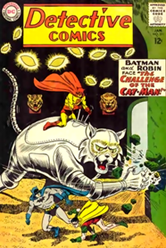 Catman vs. Batman: A blockbuster waiting to happen.When Gus barges in minutes later, Catman boasts "what you're about to witness could be the miracle of the century." Gus doesn't need convincing, because he already regards television manipulation as the apex of superhuman achievement: "Supernatural power - is it something like you can switch the TV on and off or jump to the top of the Empire State Building?" Catman, having already achieved the first item on Gus' checklist, clearly feels uninterested in stooping to second-rate stunts like skyscraper-bounding. He does light Gus' cigarette with his laser vision, and Gus puffs away, unconcerned that combining nicotine with unstable radiation might have some cancerous implications.

"I feel so strong, I feel like I could punch a hole in a fucking wall," Catman pronounces, and he does so immediately, demonstrating a domestic cat's disdainful indifference for living-space destruction. "What about the girls staring at you?" Gus asks; disappointingly, he means future, theoretical women who might witness his feats of strength, not next-door neighbors gaping at him through a jagged-brick window that used to be their pantry.

"I wonder what other powers I have," Catman muses, before both he and Gus slowly pan their heads down to his crotch. It's a train of thought certain to lead to bitter disappointment, because a) radiation exposure probably leads to sterility, if not impotence and b) even steroids, the professional athlete's chemical shorthand for "nuclear cat claws," have a nasty way of raisinizing the testicles.

Ho opens the next watchable scene with a close-up of a newspaper ad that reads "desperately seeking someone to light a cigarette." It turns out Gus, incognito as a construction worker, owns the newspaper in question. The denim gangsters, whose leader has the nameplate "Medicin" ironed onto his jacket, pull up to Gus' site, and they have a paper opened to the same ad, with a lighter strategically placed adjacent to it, inside their van. Given all the elements involved, it would be a coincidence of astronomical proportions if Ho didn't plan this running gag. However, given the surrounding inanity, even that profoundly unlikely scenario seems more plausible than acknowledging that Ho successfully conceived and executed an intentional joke.

Without his trusty bat, Gus can't contend with the jean jackets. Fortunately, Sam comes to his rescue, and by Sam, I mean CATMAN, as he's now wearing a full-fledged outfit involved black spandex, spiked armbands and double-barreled goggles. He looks like a black-metal Aquaman. While fleeing, the gang members toss a test tube toward Catman, who vows to "check it out on the cat computer system."

Gus and Sam ponder a trinket marked with the initials HCC, which they either discovered during their off-screen investigation or retrieved from the evidence-dispenser with which the never-shown cat computer comes equipped. They brainstorm about what HCC could mean. Gus tries "Ham and cheese combo" and "hot clam chowder." (More apt acronyms include "Human/cat crime-fighter" and "Hong Kong's cinematic chop-shop") Eventually, the duo proclaims "Holy Church of Cheever" in harmonic, "eureka" tones, which is odd because 1) Gus' CIA boss debriefed him about Cheever long ago and 2) the duo is standing in front of the church.

Gus and Sam interrogate a sleeping bum, who agrees to exchange HCC information for assorted snacks. At one point, Gus asks "do the strange guys look like this?" then fashions a turban. The bum's agreement notwithstanding, no one in Cheever's motley crew dons this headwear: This whole line of questioning was clearly a façade for Gus' headwear fetish. When asked about "where the strange guys hang out," the derelict points meekly to his left, presumably back toward the church grounds, where they initially encountered him.