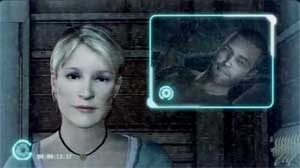 Isaac awakes three days later on one of the better moons of Saturn.The scariest part of Dead Space 2 occurred roughly three hours into it, the moment I realized the remaining five hours of this game would take place in the exact same boring metal hallways, warehouses, and corridors as the original Dead Space.

And... that's it. Now don't misunderstand me here; Dead Space 2 tries really, really hard to copy cues from various horror movies. I'm sure their team was given explicit instructions to not hire any artists who thought "Geiger" was just the name of an instrument used to measure radioactivity. They undoubtedly spent hours researching "things that people find really scary," such as loose ceiling panels, the sound of idiots dropping large frying pans, and dumb waypoint systems. I'm sure EA typed the phrase "MAKE SCARY!!!" in huge, red letters across the front page of the design doc. Hell, I'd be willing to suggest they even highlighted it or - and I may be going out on a limb here - used a different font.

Unfortunately, Dead Space 2 simply isn't scary. I realize I'm in the minority here, as every single review of the game claims the polar opposite. Game journalists have nearly died of heart attacks while trying to fight their way through a review of this title:

Battling a seven-foot beast that vomits acidic bile and tries to impale Isaac with razor-sharp appendages is one thing, but watching a mother cradle a necromorph baby will haunt my nightmares until I die.

Were you able to grasp the intense concept of that sentence? What you just read are real, actual, serious words written in a real, actual, serious magazine about real, actual, serious games. Game Informer, one of the few remaining gaming magazines that have accidentally avoided going bankrupt, has irreparably damaged the minds of one of their employees by asking him to review Dead Space 2. This man, Andrew Reiner, has admitted he will carry the mental scars forced upon him from this horrific event every day for the rest of his life. I'm not sure why Reiner hasn't pursued legal action against both EA and Game Informer; perhaps he once played Phoenix Wright, and now intense courtroom conflicts also haunt his nightmares until he dies. Possible other things that haunt his nightmares until he dies: fast automobiles, falling geometric shapes that can easily be rotated, and soup. 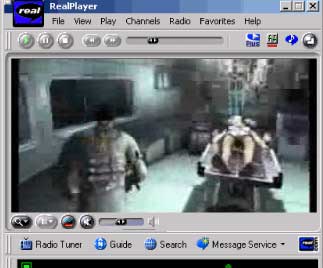 Surgery is SCARY!!!Dead Space 2 may be considered a scary video game, but that doesn't necessarily make it scary. Let me frame this in a similar context: my two-year old daughter Jaylen recently drew a picture of our house. I told her it was excellent, and for her, it certainly was. But if I were to compare this drawing to a photo of our house, it would look like a real piece of shit. Our house doesn't have one single window, especially one that is floating off the side of what appears to be some kind of mutated fungus / large hat. I'm fairly confident our home sits on the ground, and doesn't exist in an ethereal white void. And believe it or not, there's no goddamn way I'd ever move into a place painted burnt sienna.

99% of the so-called "scary moments" in Dead Space 2 fall into the following categories:

1. Walking down a hallway that is quiet - a little TOO quiet - and then suddenly there's a loud noise. The stakes are raised later on in the game, where there is occasionally two loud noises.

2. Your character is assaulted by horrifying space alien monsters, the word "horrifying" meaning "long-armed." Nothing is scarier than a humanoid creature with arms lengthier than that of normal people. Conversely, that is why the word "armless" sounds so remarkably similar to "harmless." Oh, sometimes they try to spit on you, which I guess is also scary and also helps explain why visiting teams hate playing against the Raiders. 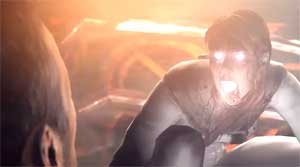 She has a fucking FLASHLIGHT in her mouth.For those not familiar with the game, Dead Space 2 revolves around one slightly insane man's fight against a bunch of unstoppable, rampaging, murderous aliens who quickly take over any land they infect. As Sheriff Joe Arpaio - er, I mean Isaac Clarke - you must stop their advance at all costs. To make matters worse, you're constantly haunted by the obnoxious ghost of your dead girlfriend, who acts slightly pissed off because she apparently choked to death while trying to swallow a flashlight. Some critics may argue that Dead Ghost Girlfriend In Space could be added to the "scary moments" list, but I intentionally left her off due to the following criteria:

2. She ate a fucking flashlight.

Isaac eventually defeats Dead Ghost Girlfriend In Space by shooting her to death... inside his own mind. Oops, forgot to add a little spoiler alert there. If you haven't played this game, do me a favor and don't read that previous sentence. Also do not read the subsequent sentence:

The final boss of Dead Space 2 is the ghost of your dead girlfriend you must shoot to death with conventional firearms inside your own mind. 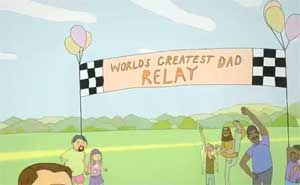 hahaha what the hell is thisRemember when I claimed somebody at EA wrote "MAKE SCARY!!!" on the front of the Dead Space 2 design doc? I'm guessing they also included a footnote along the lines of "PS: END BOSS MUST BE AN EXISTENTIAL CRISIS!!!" Does Clarke wrestle with his inner demons convincing him to purchase an expensive new sports bike? Should the gamer fight through an endless dialogue tree pushing him towards placing a personal on Craigslist for a handjob? Nah, neither of those are scary enough. How about instead he goes inside his own brain and uses an automatic rifle to gun down his dead girlfriend's ghost? Maybe toss in a few scribbly alien babies and bam, Clarke kills her and finally gets over the monumental guilt and grief he felt for originally finding her a fucking job.

All these events might seem pretty scary if you're a skittish, moronic recluse who compares them to other video games, such as the original Mario Brothers and perhaps Rocky's Boots, but by no means does it actually make it frightening in any sense of the word. Just as my daughter's drawing of a house seemed excellent for a two-year old, I would never try to argue it could stand on its own merits as a distinguished piece of refined modern art. There's a big difference between "loud" and "scary," and if you cannot tell the difference between the two, then you might not be deaf but you sure as hell are dumb.

Now can all the so-called "video game journalists" please kindly shut the fuck up about how they're mentally incapable of playing this game after 3:00 PM, due to the crippling, life-ending nightmares they'd undoubtedly endure as a direct consequence? Dead Space 2 is a predictable, monotonous, generic rail-shooter that takes place in predictable, monotonous, generic locations in space. It's essentially F.E.A.R. on an infinitely stupider, messier planet, and the only thing scary about that game was the remarkably poor HR department responsible for hiring your character.

And a little note for whoever is responsible for escorting "video game journalist" Andrew Reiner outside of his apartment for one hour each and every day: the therapy isn't working. Just please, for the sake of anybody who plays video games, put the guy down already. He's a broken shell of a man who simply cannot exist in our harsh, brutal reality. 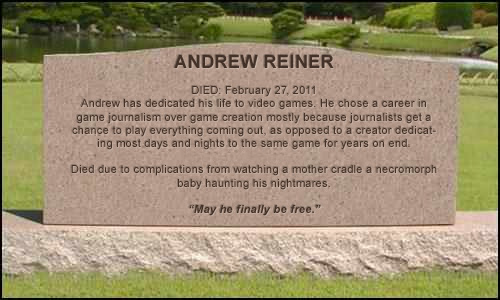