Dr. Thorpe: The Cover Up Girls is a website that challenges the traditional standards of feminine beauty, and squarely loses that challenge. While some of the models on the site are quite acceptable looking, most of them are a little heavy on makeup, heavy on the scale, short on chromosomes, or just plain misguided. It is the duty of Fashion SWAT to brave these pictures, so that teenage girls of the future can avoid these dire errors in grooming.

Zack: This is what happens when a truck load of Hot Topic gear explodes in the parking lot of a Curves gym in Muncie, Indiana. These are real girls and real women with a real overabundance of self-confidence.

Dr. Thorpe: Much as we like to make fun, The Cover Up Girls is still growing and improving every day. Soon, it will be the world's most popular destination for models too ugly for suicidegirls.com. 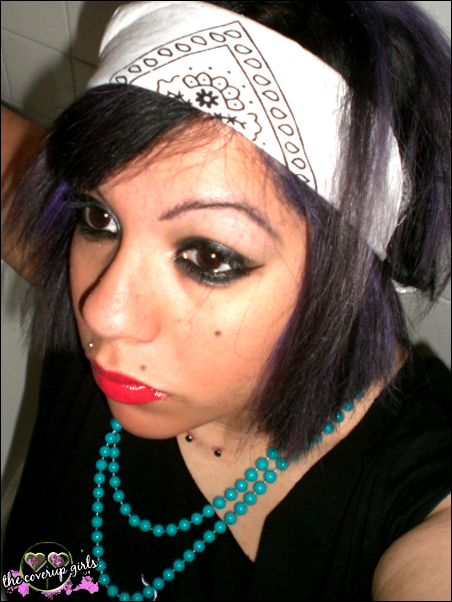 Dr. Thorpe: I never really though of "glassy-eyed resignation" as a part of the model facial expression repertoire, but I guess that's why "non-traditional" models are so valuable to us.

Zack: She's wearing an awful lot of makeup, but I still think she looks like picture eight or nine from that "ravages of meth" series.

Dr. Thorpe: "Another one of my babies died, but I'm too high on eyeliner fumes to care."

Zack: Those fumes are slowly lifting her eyebrow up her face. About two hours after this picture was taken the one on the right there drifted up into the corner of the room like a Mylar birthday balloon.

Zack: "Get the broom, Kyle. My eyebrow has done flewed up in the corner again!"

Dr. Thorpe: Here's what her eyebrow looks like, and bear with me because this is sort of complicated.

Dr. Thorpe: Okay, imagine that she has this weird compulsion to pick out all her eyebrow hairs, and imagine that when they're all gone she just keeps picking at them until they bleed and scab up and turn into a shiny pink scar. Now imagine that it's a few days after a strong rain, and all the worms that came out onto the sidewalk shriveled up into little dry reddish brown crunchies. Now imagine that she laid one of the worms over the scar, for that crusty black-on-pink look.

Zack: Hmm, I kind of see it, although I think it looks more like she has a magnetic bullet lodged in the top of her head and she rolled her face in a bunch of iron filings.

Dr. Thorpe: Also, you might as well imagine that she choked on a cherry tomato while she was picnicking in one of those weird M.C. Escher perspective lithographs, and a topsy-turvy doctor gave her a sideways tracheotomy.

Zack: I'll give you that one, she seems like she committed a little prematurely to the neck piercing. That's one you don't jump right into.

Dr. Thorpe: The upper lip piercing combined with the freckle on the other side makes it looks like she has a comedic little Cantinflas mustache.

Zack: I wonder how many times she has woken up and staggered into the bathroom all groggy only to spend like ten minutes trying to pop that little metal ball.

Dr. Thorpe: She looks like an extra in that Good Charlotte video about suicide.

Zack: That really narrows it down.

Dr. Thorpe: Yeah, come to think about it, pretty much everybody under eighteen looks like that.