Zack:The Science Fair kids are back, and we're ready to criticize them way more than is reasonable or even humane. What, like they're going to actually read this or something. Have you seen these projects? They don't know how to read.

Dr. Thorpe:I'll bet you didn't think we had any pictures left that were as good as "Voice of the Dragon," did you? Well, you're in for a pleasant surprise, folks. We had so many amazing science fair photos that we just had to do a second installment. And we're still not even through half of the good ones! For those of you who didn't see the first installment, Fashion SWAT has turned its eyes on school science fairs, and no corn shall be left unpopped! 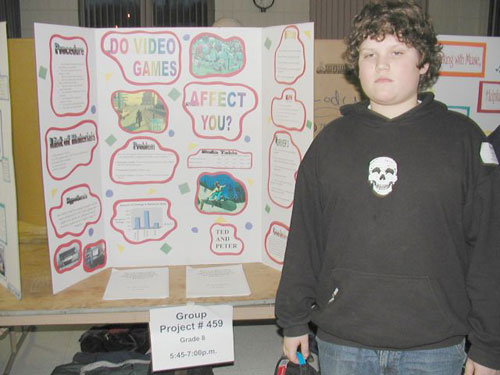 Dr. Thorpe:Yes, video games affect you. I don't care how old you are, or how attractive, or how hip and debonair you are. Whenever you play a video game, you are this kid.

Zack:He looks like he's about to do a 720 kick-flip Hoolihan on the couch and grind down a Twinkie.

Dr. Thorpe:He's going to do a sweet manual across his kitchen, ollie onto the counter, and hit a perfect 360 Famous Amos.

Zack:Videogames are slowly breeding a generation of slow-witted delinquents that graffiti corporate logos onto the walls of local businesses and get an illicit and intoxicating thrill from chugging Red Bull. On the plus side it's way easier for tattoo artists to do a Mario power-up instead of a flaming skull.

Dr. Thorpe:You know, I'm always up for a good racist caricature, but even I'm a little offended by the stereotypical apologetic "chinee" skull on his hoodie. "Me so solly I roose my skin!"

Zack:I bet that graph at the bottom of the poster has some hard data like "number of attempts to beat the Haitian mission in Vice City" set against "number of times I got mad and sass-talked mom."

Dr. Thorpe:Procedure: 1. Get Fritos
2. Turn on X-Box
3. Yell "NIGGER" into X-Box headset until mom gets home, then change it to
"FAGGOT."

Zack:I'm pretty sure step 2B is "turn on voice modulation so I sound like Scooter from the Go-Bots".

Dr. Thorpe:2C: Sneak up and turn off Grandma's hearing aid.

Zack:I don't know what sort of grandma you have, but every grandma I have met has to fight against cosmic forces not to be racist, and usually fails anyway. Not mean racist, just like, "Oh those colored boys on TV are so funny."

Dr. Thorpe:Yeah, and they're also baffled by the syntax surrounding the word "gay." As in, "I think the new housekeeper is a gay," or "I think the new neighbors are gays." They just have no control over that word.

Zack:It's slippery in their hands. They have trouble gripping it. That and jar lids. They need to have one of those magnetic jar openers except it helps them understand how to use the word gay.

Dr. Thorpe:Yeah, whenever they say "I heard they're not allowing the gays to marry each other," a big magnet pinches their face.

Zack:I think it all comes from a total lack of understanding about what being gay actually means. I think they just imagine the gays are those reptile guys from "V" that look like people, but then they find out they have a reptile inside of them. It has nothing to do with sexuality, it's just this strange alien culture that appeared suddenly in the 1980s.

Zack:"Do the gays still eat ants? I heard the gays keep frozen people in their ships. Why won't our bullets hurt the gays?"

Dr. Thorpe:I think it's more like "Alien Nation." They look a little funny but they're basically recognizable, they've somehow integrated into our culture in a way that they don't understand, and they get drunk on rancid milk.

Zack:Yeah, I suppose that makes more sense. That might be why they don't freak out when they hear about two male parents. "Oh, well the gays are the opposite so the male gay carries the baby."

Dr. Thorpe:It's like how at the beginning of Alien Nation, the aliens were already part of our world, they didn't bother with a whole lot of setup. So for the elderly, the gays are the "Newcomers" who just sort of sprang into society suddenly and they still haven't caught up.

Dr. Thorpe:Maybe that's why elderly conservative politicians are always comparing homosexual marriage to bestiality. They think the gays are a totally different species.

Zack:I don't even know how we got here from that science fair poster. I feel like an old person waking up in a world full of gays.

Dr. Thorpe:Yeah, they snuck up on you. And turned off your hearing aid.