Thursday, Oct 20, 2005 by Zack "Geist Editor" Parsons (@sexyfacts4u)
Cut a hole in a sheet for something besides conception and join us in haunting this macabre Halloween-themed installment of Fashion SWAT!

Zack: Halloween is the delightfully spooky time of year when ghouls and ghosts come out to haunt the night! But things much more dire than any goblin or bloodthirsty poltergeist are lurking in a costume store near you. Today we're taking a look at some of the worst costumes available this year.

Dr. Thorpe:Halloween is one of my favorite holidays, because I get to go to the temporary jury-rigged Halloween store at the mall and laugh at the fact that anyone would buy a thirty-dollar polyester Austin Powers costume that looks like a shower curtain. But now Halloween is even better, because I can laugh at it publicly on the internet!

Zack: This time around we intentionally left out homemade costumes and things that veered too close to cosplay crap. The former would just seem meanspirited (that's the last thing we want to seem) and the latter will probably appear in a Fashion SWAT of its own eventually. Until then, try to enjoy the worst costumes money can buy. 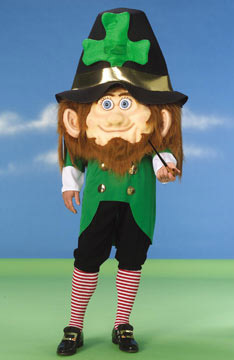 Zack: If this is what they looked like, I thank God leprechauns have been hunted to extinction.

Dr. Thorpe: It looks like it's supposed to be an adult costume, so I'd imagine it would be worn by parents taking their kids out trick-or-treating. It's also a good way to distance yourself from your child. After he saw you in that getup, no more hugs for you. But it could be a good disciplinary tool. "Eat your asparagus, or daddy will put on his scary suit."

Zack: It's like it feeds through its beard and it has just descended upon a Colonial era ship's officer.

Dr. Thorpe: Maybe that's what leprechauns really were. Just big bouncing parasitic heads that would land on someone's shoulders and devour his brain and slip their greasy leprechaun tentacles around the spinal cord of their host and take over his body.

Zack: They would entrance you with their unwavering gaze and smile and then with a slurping of viscera they would disengage from their old body, now sapped of nutrients, and engulf your head. They aren't even sentient, they just drift around on these bodies like jellyfish. Their exaggerated human features are a bizarre quirk of evolution.

Zack: Similar to the hideous plumed headdress-like creatures that afflicted the Native Americans.