Article: Know Your Neighbors... Without Meeting Them!

Wednesday, Apr 11, 2001 by Rich "Lowtax" Kyanka
As a self-professed computer geek who sees no purpose in ever leaving his apartment or interacting with an outside world that doesn't come with a "BACK" button, I have found that there's really no need to ever meet neighbors. You know who I'm talking about; the 900-pound, loud mouthed, swampwater hillbillies that are always heard stomping around in the apartment above you at 2 am. Instead of risking a face-to-face confrontation with these behemoths who could easily tear me limb from limb and use my legs to unclog their filthy toilet bowl, I have perfected the science of "shared residential deciphering," or SRD. SRD is a groundbreaking technique that allows one to learn the personalities and pastimes of people simply by living in an apartment below theirs and noting the obscenely loud sounds they create at 2 am. This article will profile the most common noises heard during SRD monitoring sessions, so you too make some day become as skilled as I am in this art. Also, it will give you something to do instead of constantly contemplating suicide. 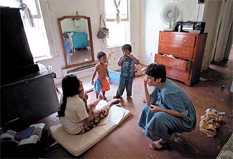 SRD EXPLANATION: Neighbor is coughing up vital pieces of his small intestines and spitting them into a large bucket he has placed near the foot of his bed.

NEIGHBOR'S PERSONALITY: Mind-bogglingly elderly man who is too busy staving off the Ghoulish Specter of Death to worry about all the noise that he's making in the process. This type of neighbor often succumbs to spontaneous coughing fits in the late hours of the night, during which time many key organs are vomited upon his World War II-era bedsheets. Since these types of people require hearing aids with the power of a car stereo amplifier, they are able to soundly sleep through these hackfests... although everybody within a 500-yard radius of their apartment won't.

SRD EXPLANATION: Neighbor is arriving home after drinking nineteen gallons of Wild Turkey and chasing them with a Slim Jim he found in the bed of his pickup truck. He slammed the door shut, walked in the general direction of his yellow 1967 Sears recliner sofa, and passed out. Unfortunately, he missed the sofa and landed on his dog, rolling off of it onto his linoleum floor. The dog, who has been missing an eye and a good portion of its left ear since "the ol' opossum incident" back in 1983, bolted out of the house and began uncontrollably urinating on the deck above you, which will drip down onto your face the moment you leave your apartment. Ever wonder what those random drops of wet stuff that hit your face every morning are? There's your answer.

NEIGHBOR'S PERSONALITY: Blue collar worker who is employed by some business that has at least six "NO SHIRT, NO SHOES, NO SERVICE" signs crammed into the men's restroom. To him, alcoholism isn't a problem but merely a way of life.

SRD EXPLANATION: Neighbors are using their $50,000,000 stereo equipment to blast out the DJ EZ Cheez's latest rap CD, "Fuck You, Fucking Mothahfuckers" while they challenge each other to a particularly brutal game of Madden 2001 on their Playstation.

NEIGHBOR'S PERSONALITY: Up and coming rap stars who are currently attending community college, majoring in "modern music study." These courses help them fully understand the difference between complex concepts such as "treble" and "bass," allowing their platinum-lined speakers to emit the most horrific sounds ever devised by mankind. Playing music with such painfully loud beats keeps their furniture and kitchen utensils clean, as the dirt particles are instantly shaken off and fall to the ground, where they're mixed in with the pounds of marijuana that have accumulated over the past three days. When you're trying to use the phone or study, the neighbors will tip their speakers over and aim them directly at the floor below, hoping that the twelve million decibel bass waves will reverberate through your head and cause your skull to spontaneously explode ala "Scanners." This is because they hate you. 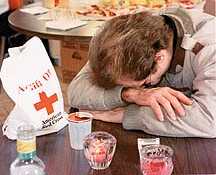 SRD EXPLANATION: Neighbors, who are from a highly foreign country, are getting into an argument when one of their many children who sleep in the bathtub slips and knocks over the pot of whatever-the-fuck they made for dinner. This causes the apartment to smell like boiled cat urine and sneakers for the following nine decades.

NEIGHBOR'S PERSONALITY: Constantly arguing and bickering over events that may not have even occurred, these immigrant neighbors speak a language which many scientists believe is simply made up as they go along. Since neither of the foreign couple can understand the other one, they end up shouting for hours on end, unable to resolve anything. In the meantime, their hundreds of children, many of which are able to stay 14-months old for up to 12 years, continue to participate in their favorite activity of "running across the living room until they get to the other end, at which point they run back to where they started so they can begin the game all over again." Knocking things over awards bonus points in this exciting game.

SRD EXPLANATION: Neighbor's phalanx of nappy cats are taking turns leaping off random furniture and wandering amongst a trail of "Precious Moments" figurines. Soon the neighbor enters the room, at which point all the cats simultaneously begin to purr and create a sound wave which resonates at critical levels throughout your ceiling, causing many of your fragile objects to shatter. Since the neighbor becomes absolutely thrilled no matter what her mucous-covered felines do, she begins to yammer and compliment them on simply being alive.

NEIGHBOR'S PERSONALITY: This dangerously senile subject routinely mistakes her countless cats as various family members, apartment complex residents, and key political figures. Having driven her husband to suicide years ago, she spends a good portion of the day collecting social security checks and discussing current events with her feline family, who offer their opinions in the form of dark brown chunks buried under their kitty litter.

UNIDENTIFIABLE SOUND: "THUMP! YOU SEE, YOUR HONOR, MY CLIENT COULD NOT HAVE POSSIBLY MURDERED HIS WIFE AND THAT FAMILY OF HOMELESS PEOPLE AND THEIR TRASH-TALKIN' PARROT. AS PROOF, WITNESS MY DOWN-HOME DEMEANOR AND UPTOWN DEFENSE METHODS WHICH ENSURE THAT SLY COURTROOM TRICKS AND THEATRICAL METHODS WILL PROVE MY CLIENT INNOCENT BEYOND A DOUBT. THUMP!"

SRD EXPLANATION: Neighbor's television is showing an episode from the "24-hour Matlock Marathon Channel," which is freely available to everybody in the entire universe except you, and is transmitted through your apartment complex's water pipes.

NEIGHBOR'S PERSONALITY: As a man who lists his fulltime position as "permanently unemployed," this type of neighbor specializes in watching television and dropping random objects throughout his house. Since he assumes everybody in the free world and their dead relatives naturally love "Matlock" and other thrilling dramas which involve old people and scenery with lots of fake wood paneling, he is keen on leaving the television tuned to his favorite shows all day and night. To be positively sure that you know his favorite show is currently running, and has been nonstop for the past nine months, he will periodically drop large objects like bowling balls and barrels full of solid lead at 4:00 am, so you might wake up and enjoy the show like he is. As far as scientists know, this man has NEVER fallen asleep in the last two decades, and has only left the soft glow of his television once, when he had to go to the store and load up on "things which weigh more than 70 pounds each."

Have any other SRD explanations? Email them in! For the sake of science!