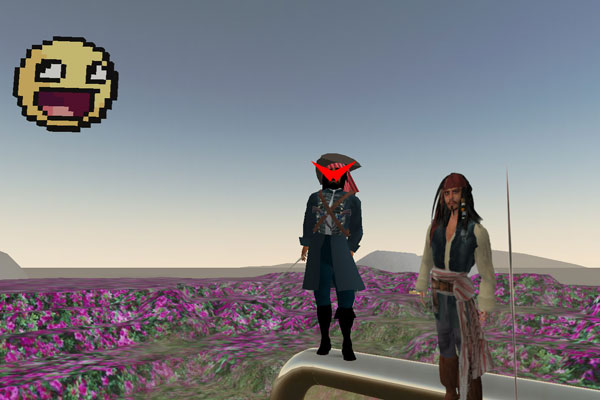 It was a dark and stormy night.

A cliche, perhaps, but that is the way these stories usually begin. The old saw says necessity is the mother of invention, and this is true, which is why so many great men, great deeds, and great galoshes have been born out of dark, stormy nights.

Allow me to more formally introduce myself. You may know me as Petey, the humble humorist, but among my fellow academics I am known as Petey, the leading pirateologist on the planet, a title conferred to me upon the death of Samuel Saltswallower last July. How did he die, you ask? A tragic obsession with the antics of David Blaine led the hallowed but hubristic Saltswallower to attempt to break out of Davy Jones locker. Before any of us could convince him to reconsider, he had entrapped himself inside an idiom, from whose chains no mortal man can escape, and so he soon succumbed to the watery embrace of its figurative brine, 'til it finally dragged him down beneath the depths.

But I think you have no interest in the ignominious fates of anonymous men. I think you pine for tales of intrigue. Of love. Of strong, dashing men, with bandannas about their heads and shirts torn open to the navel, singing songs with lusty voices as they prance about a wooden deck. I don't have any such stories, because my expertise is of pirates, not Broadway. I will do my level best to entertain, though.

Our story begins, then, on a distant, misty island, where Evil's ill will begins to stir.