Steel yourself and get ready to send as much hate mail our way as you can muster, because once again Ian "Professor Clumsy" Maddison has somehow managed to become enamored by a movie that everyone else hates! This time he's championing A Good Day to Die Hard. On less contentious ground, we have Joseph "Jay Dub" Wade on the dire Identity Thief; Ian again on the surprising Beautiful Creatures; and Martin R. "Vargo" Schneider on the godawful Safe Haven.

A Good Day to Die Hard

EXPECTATIONS: Oh my, this looks terrible. Die Hard has already been done to death, and it's hard to believe that any franchise can recover from a scene like this, so who even cares at this point?

REALITY: Everybody seems to hate A Good Day to Die Hard, and I mean everybody. At the time of writing this, it sits at a meager 17% on Rotten Tomatoes, that grand holy arbiter of objective film quality, and I've already gotten into many arguments with strangers on the Internet about it. You see, I loved this film. It is not the film you think it is, it is not the film that is being sold to us and it is probably not the film it wants to be, but it is very interesting. Light on plot, light on characterisation, light on just about everything, it uses sheer visual nuance to tell a very concise narrative about a man getting to know his dad, and it does so effectively. I think that's pretty amazing. 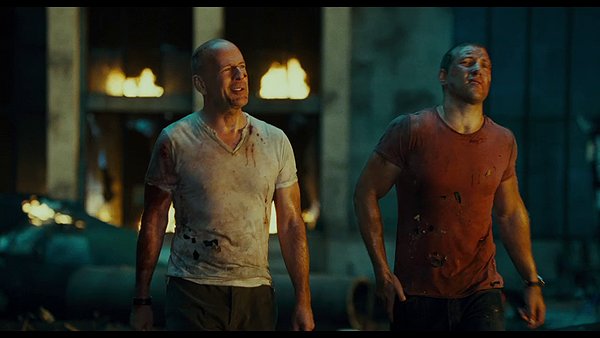 The weather in Russia is a little too cold for the vest, so they compromised with some short sleeves.


Now, like I said, there's not much of a plot to speak of, but for the sake of getting all our ducks in a row, here it goes: Aging New York cop John McClane (Bruce Willis) goes to Russia to find his son Jack (Jai Courtney), who was recently arrested for murder. Soon he discovers that Jack is actually a CIA spy charged with protecting a man who has evidence to put down a Russian mob boss. All that stuff about Russia and mob bosses? Just ignore it, it's irrelevant.

It obviously doesn't follow the old Die Hard formula of John McClane being in the wrong place at the wrong time and finding himself facing off against terrorists who are really burglars with an impossibly elaborate plan. In fact, it's not about John McClane at all; it's not even really a Die Hard film. It's a film about getting to know your dad. It is to Die Hard as Abraham Lincoln: Vampire Hunter is to the real Abraham Lincoln.

A Good Day to Die Hard comes from a place of reverence for the original, but it's built more on the memories of Die Hard than the actual plot of Die Hard. The message here is not related to that film, but rather to our memories of watching it. More specifically, the memories of watching it with our dads. It only evokes Die Hard at all because that's the relationship a lot of members of our generation have with that film, watching it for the first time as a bonding experience with their fathers. Now those young viewers are all grown up and possibly even parents themselves. Well, how is that father/son relationship now? Is watching Die Hard still one of their fondest memories? 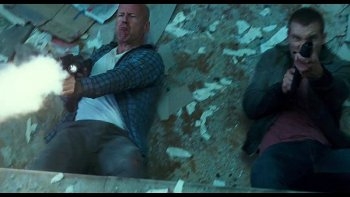 They really do spend most of the film in the same frame, even during action scenes.It's true that A Good Day to Die Hard spends a lot of its time reminding you of a better film and the good times you had watching that film. As a cinematic goal, I honestly can't fault it for that on this occasion, because it's so succinctly executed. Yeah, the dialogue isn't as snappy as it could be and the plot is the flimsiest you could ever imagine, but A Good Day to Die Hard isn't really concerned with these things. Its goals are much smaller.

In early scenes, such as an extensive car chase through the streets of Moscow, John McClane is depicted as some kind of superhuman caricature of himself. As such, he ends up being extremely un-McClane. He more closely resembles Jason Statham in The Transporter, pulling off ridiculous stunts with various vehicles with seemingly little effort, all the while reacting to everything he does with disbelief, because it's too ridiculous even for him.

As the film progresses, the aesthetic evolves into something more reminiscent of the original Die Hard, with gigantic lens flares dominating the screen. There is one shot in particular where a single lens flare leaves an illuminated streak across his eyes. The aesthetic of Die Hard, or this approximation of it, is part of him: It's how he sees the world.


McClane is not fooled by the bad guys' ploys because he already dealt with Hans Grüber. He's not going to fall for another "Bill Clay" performance. It seems logical, really, that none of this fazes him anymore; this is just what he does. If any normal person had been through a rehash of Die Hard four times already, it would start to feel old by the fifth. That's why the entire story is told through the eyes of Jack, the wayward son.

It's a cinematographic arc that begins with Jack's almost worshipful view of his action hero father that he barely knows. As he gets to know him, he sees him as we once saw him. This is the kind of cinematic idea I love to see. This is why I watch, to see cinema! You'll probably hate it and you'll probably hate me for loving it, assuming you don't already, but there are ideas worth paying attention to in A Good Day to Die Hard that end up being genuinely enriching. And really, do we need another formulaic Die Hard movie? Would you not rather see a smaller sequel that plays with an idea like this one does? We still have Die Hard, and now we have this.

MINORITY REPORT: I could write until my hands turn arthritic about the myriad ways in which Ian is wrong about A Good Day to (Watch) Die Hard (and Forget This Film Exists), but every other critic in Internetland has preemptively taken up that cause, so I'll limit myself to providing two reasons why this is not only a bad Die Hard film, but also a bad action film. 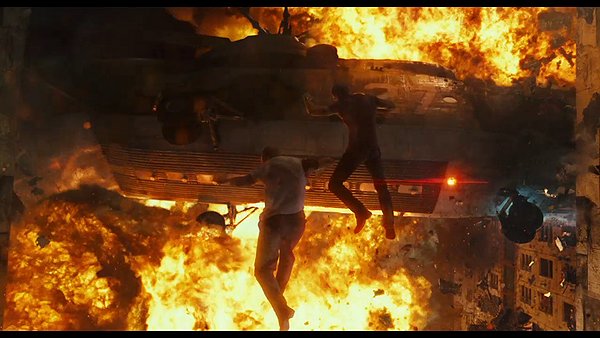 Don't look at this eye-catching, bright orange image if you don't like spoilers.


1: The father/son shit is trite. The minute an action film - let alone a Die Hard film - begins beating the audience over the fucking head with its characters' personal problems, it usually starts sucking because, with few exceptions, the creative teams who know how to blow shit up real good clash with the creative teams who have a handle on things like subtlety and precision in dialogue. Those few exceptions, including Die Hard, are the action films that have transcended their genre and taken up a throne in the high echelon of cinema.

In the past, John McClane's personal failures were the backdrop. They bolstered our sense of McClane as a streetwise lughead who, despite failing to understand his wife's desire for personal equality or the strains the badge can put on a marriage, is willing to do anything to keep his family safe, which leads me to...

2: This is the first time John McClane has gone looking for trouble. Underdog heroes are reactive, not proactive, so the minute John McClane boards that airplane to Russia, knowing his son's in some serious shit in a country that's not exactly famous for its fair trials, he separates himself from the pack of relatable action icons who are just doing what they can to survive. To draw on another franchise, Skyfall received a lot of praise for its narrative, which consisted mostly of James Bond reacting to the bad shit that was happening all around him.

Also, Jai Courtney makes for an irritating John McClane Jr., and the supporting players who made the other Die Hard movies so goddamn likable are nowhere to be found, leaving Bruce Willis and Jai Courtney alone to fuck up other people's countries and argue incessantly while they do it like only white American men can. - Sean "Keanu Grieves" Hanson