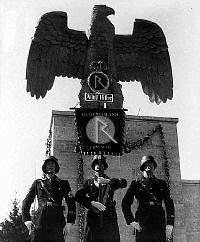 Rambus lawyers outside their offices, demanding a toll for every car that passes by.

Los Angeles, California - Technology firms Bitboys and Rambus recently announced a merger which will effectively combine their main strengths of "being laughed at by members of the general public" into one public entity named "Laughingstock Industries Limited."

"This is indeed an exciting moment for the entire computer industry, as two of the 'movers and shakers' in this business have finally joined together to offer people a one-stop, simple solution for limitless PR-gaffes, slip ups, and general idiocy," offered Rambus founder Dr. Mike Farmwald. "No longer will they have to comb through pages and pages of news and tech sources such as The Register to learn about either company's latest public display of stupidity. Laughingstock Industries Ltd. will detail all our latest press releases, comments on rival companies, and terribly unrealistic launch dates and system specs."

The benefits of such a merger were instantly demonstrated, as Bitboys CEO Shane Long revealed the specs for their upcoming graphics card, the "XBRSN1-283SMFZZ-ULTRAX-II," which is the first creation jointly engineered by both companies.

"The XBRSN1-283SMFZZ-ULTRAX-II is a revolutionary new product which takes our engineering strengths, ludicrous hardware specs, and bald-faced PR lies, and combines them into one product that will revolutionize the graphics industry as you know it. Our XBA2 engine will allow a 64 mega-textel pipeline that can support a memory bandwidth of over 200 GB / sec. Game designers will finally be able to take advantage of 512-bit color and program their titles for not only 3D applications, but one step better. Yes, that's correct, our card will be the first to support 4D programming as well. You can actually finish coding a program before you even start working on it!"

Farmwald then took over the presentation from Long, pulling up a series of pricing charts which used an awful lot of zeroes. "Our pricing plan will be revolutionary as well. As you can see from my first chart, customers will be asked to pay an initial upfront fee, and then a fixed cost per use of each game they choose to use the XBRSN1-283SMFZZ-ULTRAX-II with. Also, if you mention our product in public, you have to pay us. Oh yeah, and if you think about our card, or even have a dream about it, you have to pay us too. And there's a fee for knowing somebody who thinks about our product as well."

"And we're going to start releasing the card in six days!" interrupted Long. "And production has already begun! And we've got 10,000 of the units just lying around! We're using them as paperweights! There's no possible way for us to miss this release date! It just won't happen! There's no way! Our video card is revolutionary, fresh, and in your face!"

Farmwald then announced the press conference was over, at which point his army of lawyers slammed the doors shut and forced every member of the audience to pay $100 before being allowed to leave. Once the reporters handed over the money and left the conference area, they were then greeted by more Rambus lawyers at the exits of the building, demanding to be paid another $100 for the same service.