The Paypal Fiasco: In Summary 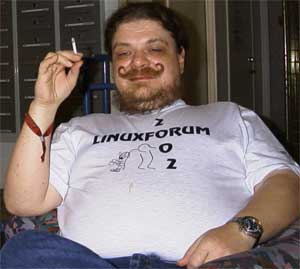 Well what a week it's been! Let me provide a quick rundown of the exciting events for everybody out there unaware of the entire story.

1) Hurricane slams into the New Orleans area. I'm assuming most of you knew this occurred, and for those of you who didn't: please send me samples of whatever drugs you're taking.

2) The Something Awful servers, hosted by the brave men at Zipa / DirectNIC, switched to emergency backup power generators to keep everything alive. They fueled these massive power sources with oil barrels collected from the faces of anime convention attendees.

3) While the generators received sufficient power, their OC3 connections (the big fat lines connecting their servers to the rest of the world) began failing one by one, as ISPs in the area either fled, flooded, or realized they weren't going to risk their lives to make sure local residents could search the Internet for "Blossom" pornography. By the way, yes, it does exist. And no, you do not want to see it.

4) Something Awful, one of Zipa / DirectNICs most bandwidth-intensive customers, had to be taken offline so their other 8,000 customers could stay up. This is comparable to shooting the morbidly obese 900-pound fat guy taking up space in a nuclear fallout shelter so 20 other people can fit into the area he was consuming. And, judging by the rescue footage of New Orleans, this is a scenario we might very well encounter in the near future.

5) All communication in the New Orleans area went down (obviously), which made it near impossible to contact our server admin who lived down there. To temporarily get SA up, I bought some crappy hosting on a Dreamhost plan, which had an absolutely painfully idiotic name like "THE ULTRA SUPER AWESOMNATOR INSANITY WEBHOSTING MEGAPLAN 2000." It made me feel intensely embarrassed, but sometimes we have to sacrifice our humility in times of crisis, not that I had any pride to begin with.

6) I decided to host a fundraiser to generate money for the victims of Hurricane Katrina, so I created a Paypal account for people to send in money, which would go to the Red Cross. The entire reason I chose to use Paypal was so I could collect the names and addresses of each donor and send them some free Something Awful merchandise for their contributions. Trust me, I would've rather had people donate directly to the Red Cross, but they would not provide me with the names and address of those who contributed.

7) The fundraiser was a blistering success, raising over $30,000 in under nine hours.

8) Paypal decided this was awfully suspicious, so they immediately locked the account without warning.

Here's where the real problem begins. Now I have absolutely no qualms with Paypal raising a red flag when $30,000 flows into an account in less than half a day, to an account created hours earlier. Instead of saying, "gee, our company is making $1,188.37 from somebody (they charge 30 cents per transaction, there were 1284 transactions total = $385.20, and they charge 2.9% per transaction, there was $27,695.41 donated = $803.17), let's close them down without any notice," perhaps they should have employed a living, breathing human being to contact us and investigate before they froze the account without warning.

Nope. Paypal decided to instantly freeze the account with no warning, no indication, no way for me to explain what was happening. You see, Paypal's outlook is that every single one of their customers is a liar, a cheat, and a thief. It's your job as their paying customer to prove them wrong. While you spend time faxing them all kinds of proof, including drivers licenses, social security cards, bank statements, and credit card statements, Paypal sits on your money and earns interest on it, making them even more cash. They can close, limit, freeze, or take money from your account whenever they like and for whatever reason they like; when you join their service, you must click a box agreeing to this policy.

So how can they get away with this? I mean, banks can't rip off customers like this, can they? No, banks can't... but Paypal isn't a bank. They aren't governed by the FDIC. They literally answer to nobody. They hide customer service email contacts, rarely offer communication with actual human beings, and place functional phone numbers behind mounds of worthless distracting garbage. 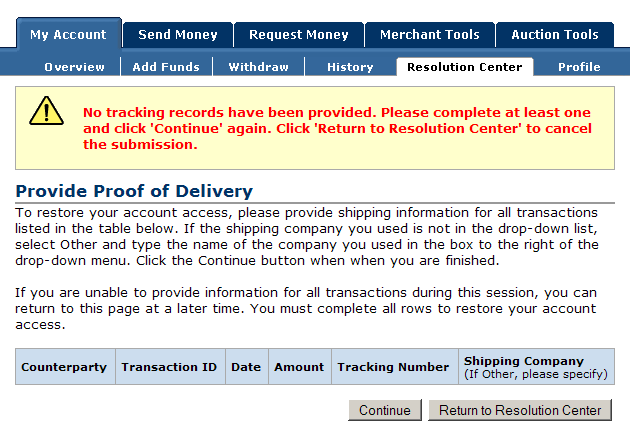 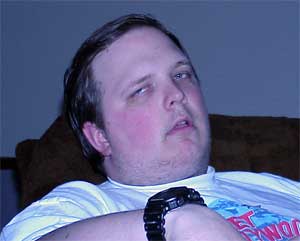 I called up Paypal's customer support hotline, which I could find NOWHERE on their website and had to instead pry from the website Paypal Sucks, and was greeted by a series of automated messages informing me nobody could talk to me because it was after business hours. I guess, you know, nobody on the planet is expected to conduct business after Paypal closes for the day. And all you jerks on other, highly non-American continents: learn to stay up until 2:00 AM so you can sit on hold for half an hour and eventually talk to a customer service representative who personally hates you.

After faxing in the necessary paperwork, Paypal's servers emailed a generic form reply explaining I would receive a response from an actual human being "between 3 and 5 business days." Well, today's a holiday, so that means at the latest, somebody would get back to me next Monday, which would be a total of NINE DAYS. I guess I could fold up a bunch of paper airplanes with the message "HANG IN THERE GUYS; PAYPAL MAY OR MAY NOT LET ME SEND YOU AID" in the general direction of New Orleans, but to be honest, I'm terrible at making those things. Every time I try, the airplane goes straight down and crashes into the pavement. Sometimes I can hear tiny, hollow screams of the paper pilots trapped inside the wreckage.

I was mad. The donators were mad. Some Internet news sites picked up the fact that Paypal was generally screwing over not only contributors, but the people in New Orleans who needed the relief funds. All the negative publicity caused Paypal to cave in and physically force one of their employees to actually pick up a phone and contact me. She explained the same thing I already heard and knew: the Internet is full of thieves, they didn't know if I was planning on stealing the money and using it to purchase $27,695.41 worth of bathtub tiles, etc etc. I replied that while this logic is understandable, Paypal's entire mind set of "assume all our customers are guilty until they prove, beyond a shadow of a doubt, they're innocent" is a bit ridiculous. I mean, here it was, every hour Paypal has the account frozen was another hour the victims of the hurricane lost $3,836.92 in donations, and the kind ladies and gentlemen at Paypal were saying it could essentially be up to NINE DAYS before anybody could donate again, and any of the money MIGHT be released to the Red Cross.

I told the customer service representative that if they're so paranoid about me being a criminal, they could directly take the money from my Paypal account, completely lock me out of it, and donate it themselves to the Red Cross. Unfortunately, this too was impossible! You see, Paypal has no direct affiliation with the Red Cross, which somehow means they can't send money to them. Don't ask me how that works; last time I checked, the Red Cross accepted money from anybody anywhere. The Paypal representative said they can only donate money to the United Way; you know, the organization where the president was sued for stealing half a million dollars from them. You know, the organization with a loathsome two star rating, that spends nearly double the amount of money in "administrative overhead" (read: advertising) as Red Cross. It turns out that this is what the United Way is famous for. They weasel their way into companies and sign contracts with them, blocking the corporations from accepting donations to any other charity. I guess it's fitting Paypal chose to team up with them. 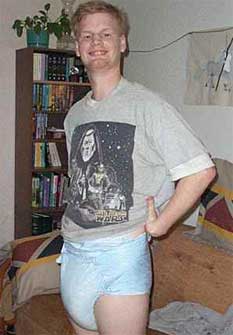 To quote the magic eight-ball, "outlook not so good." After the surprising hostility Paypal showed in my attempt to raise money for the Red Cross hurricane relief fund, I realized there was no way to get the money from point A to point B as long as Paypal was point seeing the donations. I called the Paypal representative and instructed her to refund everybody's money. Although it's taken over a day for them to do it, they are issuing complete refunds (except for foreign money orders; anybody who used Paypal to convert foreign currency to US dollars have lost money on the "conversion fees"... despite the fact NO PHYSICAL MONEY CHANGED HANDS. I guess the mere process of adding one of those stupid "£" signs to a series of virtual numbers costs a lot of money).

I had no business until today. The hurricane removed my entire source of income. I had no way to communicate with anybody near the data center, I had no way to contact my systems administrator, and I had no idea if and when our servers would be back online. All I was trying to do was raise money for the unfortunate victims of Hurricane Katrina, and SA's readers did an utterly amazing job generating nearly $4,000 an hour in contributions. Sure I was dreading having to pay postage on 1,284 envelopes full of SA merchandise, but what the heck; it was for a good cause. Then Paypal decided to step in and shut it all down.

I'm not going to tell people to close their Paypal accounts. I'm not going to say all their actions were completely unwarranted. I'm just presenting my experience with them and will allow you to draw your own conclusions. However, I harbor a fundamental disagreement with their business practice of assuming all their clients are filthy criminals who must repeatedly prove their innocence to a series of unmanned servers and computer systems. I do not support their ability to freeze entire accounts, take money from whoever they want at whatever time they want, and impose whatever arbitrary rules and regulations they deem necessary without having to answer to any organization. Every single cent in every single Paypal account is earning their company ungodly amounts of interest in their central bank account. They offer users credit cards and the chance to put your money into interest-generating accounts. So exactly why are they not under banking and FDIC rules again?

To everybody who donated: thank you, thank you from the bottom of my heart. Something Awful truly has the best community on the entire Internet, bar none. You people have raised $6,000 to buy toys for children with cancer and other fatal diseases. You donated $22,000 in armor plating for soldiers in Iraq. You even raised over $12,000 to buy a forum member a kidney when his failed and he was on critical life support. Now, when Hurricane Katrina devastated New Orleans, we raised over $30,000 in less than nine hours. Much like how the hurricane wiped out New Orleans, it's a shame Paypal wiped out your efforts to donate. I will begin another support drive shortly, once all the Paypal refunds have been sent.

It will not be through Paypal.