Regarding Our Zoo's Rebranding as "The Insane Horror Zoo" 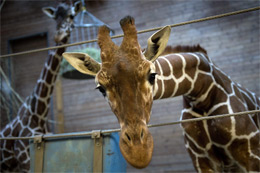 Since 1859 our zoo has relied on the support of members like you to ensure that our large collection of exotic animals live in the best possible environment for patrons and animals both. With your help we have built a reputation for uncompromising care for our animals in realistic habitats.

Recently, a media outrage began when our zoo euthanized Marius, a healthy giraffe, butchered it in public, and then fed its body to a family of lions - Gutsav, Mitzy, Hooper and Bryant - which we then also euthanized.

We understand that it can be upsetting that we are killing all these beautiful animals. To be honest, we don't like to do it much, but it is part of our rebranding effort that we announced to members last year. 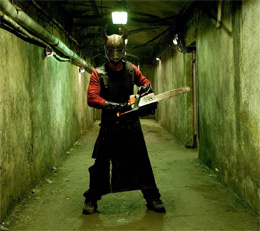 Since zoos around the world have undertaken efforts to become more humane, our own efforts to provide lifelike habitats, ample space, and comfortable interaction with patrons no longer really set us apart. That is why these "culls" are part of the larger plan to rebrand the Copenhagen Zoo as "The Insane Horror Zoo."

In 2013 we were known as a zoo that cared about our animals and our patrons. In 2014 we will insanely brutally murder as many animals out of our collection as possible to give the public the impression - woop, woop - we don't give a fuuuuuuck.

We want to create brand synergy by wasting tons of animals. We will become the Hostel of zoos. We will do anything to these animals. We will ice a panda. We will do a hit on a python. If you can't hang with this, you need to get out now, because the carnage has only begun. Our 2014 schedule of animal death is just getting warmed up.

Two penguins Olly and Guido, our goddamn laziest, worst penguins, will be kicked off a ledge and told to fly. We have to cull the penguins because they're just not keeping up their end of the deal.

The orangutan parents Jenny and Buster will be made to watch while we drive a truck over their children Klaus, Wendy, and Spencer. Maybe next time they will think twice before overturning a bucket and wearing it as a hat like this is some sort of joke.

We're going to ask the public to kill a turtle named Bishop with a hammer. There's no reason they should get to stay innocent when they keep coming to our zoo.

Our Living Zoos exhibit will allow patrons to cut a rather shit parrot named Carol in half with a laser to prove that we can do it.

We've asked the Berlin Aquarium to loan us their rare hammerhead shark named Felix so that we can put it in a cement mixer and drive it around Copenhagen until it's fucked. Just to teach all the other fish a lesson.

Live Mortal Kombat style X-ray video of a karate expert beating the bones out of our oldest tapir, Geoff, because, "Tapirs...who gives a shit?"

The Amazonian tree frogs, which we never bothered to name, are going to be painlessly euthanized inside a microwave in keeping with Copenhagen Zoo's plan for 2014 psycho microwaving.

Our spotted jaguar Anthony, recently voted smartest and best-looking jaguar in Europe, is going to be put through a wood chipper and we have fuck all reason. Really, what are you going to do?

Celebrate Christmas at the Copenhagen zoo with the chance to fire a shotgun into the chest of a reindeer. This beast will be terminated after being born and nurtured over the summer. There will even be a contest to name it in July. Winner gets to pull the trigger on this rowdy reindeer.

If you have any favorite animals you would like us to consider executing, please let us know. We especially value the feedback of our lifetime members. If you are one of those people who think what we are doing is wrong or "sick," hey, those who can, run a zoo, and those who can't, criticize us on the Internet. If you don't like the way we massacre our animals then maybe you aren't cut out to hang with the craziest psycho zoo in the entire world.

We have an ecologist on staff. We are doing all this because of science and herds or whatever. Totally legit animal massacres.

For those of you who understand our new brand, be sure to bring your hatchets and butcher knives from home on May 15th for a chance to be the first in your family to chop the head off one of our older crocodiles named Terry. Trust us, he has it coming.