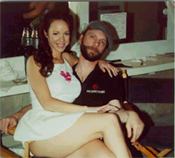 You may know Michael Fox from our review of "Evil Ambitions", the movie about Satanists, politicians, bathtub slime, and unappealing news reporters. However, this flick is just one video in a long line of movies this man has masterminded, ranging from the intellectually stimulating "Chickboxin' Underground" to the immortal classic "Live Nude Shakespeare". SA was lucky enough to grab Michael and ask him a few questions about "Evil Ambitions", as well as the vibrant Ohio movie-making industry.

SA: Thanks for agreeing to answer some questions for us, Michael. There's so many questions the SA staff has been dying to ask you. First of all, what was the inspiration for "Evil Ambitions"? Have you ever met any Satanists, psychics, or evil politicians?

MF: Interestingly enough, the idea of yuppies having their souls snatched by Satan struck my writing partner and I in the mid 1980's, and the original idea revolved around a trendy dance club that featured very theatrical renditions of musical numbers that were -- unbeknownst to the patrons -- actual ceremonies designed to initiate the patrons into the group. We just never got the characters developed the way we wanted. When it came time to follow up our first movie VAMPS: DEADLY DREAMGIRLS (winner, Best Screenplay, B-Movie Theater Awards) we saw the old NIGHT STALKER format as one that would work on our limited budget, and with the already established connection between the tone of the X Files and the old series, we thought that an homage would work.

Have I met Satanists? Sure. They're more commonly referred to as "distributors". Psychics? Only my aunt Blanche who raised lizards and ate them. Evil politicians? Is there any other kind?

SA: Why did the background ambient noise fluctuate throughout the entire scene where the jaded and cynical reporters discovered the first corpse by the lake?

MF: Very cheap equipment and a novice sound man who did his best, but it wasn't enough, and a couple of actors who weren't at their best when doing ADR (booth work). We tried the ADR approach, but the end product was actually even more bothersome, if that's possible. (I'm surprised you picked out that scene. The one that's even worse is the laboriously long reception area scene where the reporter sits waiting for the councilman.) 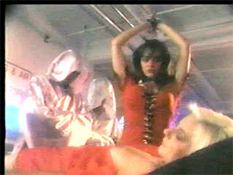 The exclusive Satan Fan Club in "Evil Ambitions" meets in what appears to be the boiler room of the local YMCA.

SA: What was the purpose of theslime that attacked the ladyin the bathtub?

MF: Most unfulfilling sequence I've ever shot, re: what it could have been, and what it turned out to be. We just plain overestimated our ability to pull off a large gelatinous mass that should have oozed out of the pipe and plopped into the water, and then spread out like a big ameba and then suddenly wrap itself around the unsuspecting snoozin babe, and dissolve/digest her. We didn't have the right goo, the right lighting, or enough smoke and bubbling flesh to communicate what we had intended. But, a rule of thumb for all B productions: you cut dialog. If there's any physical conflict -- especially physical conflict involving a lovely scantily clad nubile -- you save as much of it as you can. Ergo, it's in there.

SA: Why did you decide to put this in the movie?

MF: The Corman formula, which I genuinely admire: You have to have someone being chased, something blowing up, somebody getting killed, or somebody getting naked at least once every three pages. B film audiences are looking for such action/exploitation elements.

Also, we wanted to put the reporter into even more turmoil over his impending slavery at the lead lady Satanist's leash. Killing off the closest thing to a girlfriend for him was one visual way to do that. We purposefully included it in a montage sequence that we hoped would build to a nice fevered pitch to get us moving into act III.

SA: Why were theleast attractive peoplethe only ones that showed their breasts?

MF: OK, that one I'll argue... Lucy Frashure -- the gal playing the bride of Satan -- is arguably the most striking beauty in the thing. (She runs neck and neck with Amber Newman). Lucy's been in Playboy's Lingerie, and you see her topless and strapped to an altar. And Amy Ballard -- the gal whose dress falls off as she snatches the reporter-- was the first model in the history of SCREAM QUEENS magazine to get the centerfold in her first pictorial. Folks at the largest horror convention in the country (CHILLER THEATER CON) were mistaking her for B-movie diva Julie Strain.

Now, the gal in the opening sequence -- cropped blonde hair, passed out -- I'll grant you was miscast She was someone that we had to throw into the scene when the booked model stood us up on shoot day, and one of the down side to producing in the town that threw Larry Flynt out is that finding a gal who's willing to remove her clothing in front of a camera ain't exactly like calling a cab. We were up against a very strict production schedule. We got the scene in the can. End of story. Also, the scene where the willing bridesmaid licks the blade and then gets stabbed was written to be in the nude. The actress backed out the day of the shoot. (The only time in 5 movies, by the way, that such a thing has happened.)

The other gal -- the kitty chick -- was cast as the "anti-model". If you remember, she was struggling to find work. Her nudity was not included for eye candy. It was to reinforce her vulnerability and the irony that the only folks that wanted to see her naked were the ones who would eventually rip her heart out of her body.