Hello, "ladies" and "germs!" Welcome to Spooky Steve's Halloween Sound Effects Album Reviews: the Internet's definitive source on Halloween sound effects albums since 1996! Spooky Steve apologizes for the long delay since his last update, but he's been bedridden for the past six months, fighting a debilitating case of restless legs syndrome along with the demons of chocoholism. And in more hair-raising news, Spooky Steve's longtime live-in girlfriend Creepy Carol has decided to "fly the bat's nest" for a younger man who manages a Dairy Queen and isn't "afraid of intimacy." Talk about scary! With Spooky Steve in the state he's currently in, let's just hope that Carol and her new "boo" (beau) enjoy sleeping with the lights on!

Since Spooky Steve isn't one to throw in the "bowel," he's cooked up some new reviews for you kiddies just in time for HELLoween! Now that he's experienced the unspeakable horrors of heartbreak, the bar for Halloween sound effects albums has officially been raised! 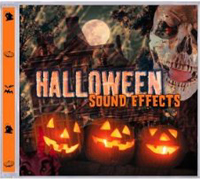 Spooky Steve isn't going to lie to you -- he's been thinking a lot about death lately. Spooky Steve's death. Where to do it, how to do it, and how bad everyone will feel once he's gone. And the pure garbage that is Halloween Sound Effects has only made Spooky Steve's funk worse. The title alone should indicate the rollercoaster ride of mediocrity pressed onto this disc; Spooky Steve had to turn to his trusty bedside carton of Whoppers just to stay awake! And maybe this is just a personal problem, but the sound of moaning werewolves doesn't really do much for Steve anymore. But nothing really does. Spooky Steve is waiting for the day when a Halloween sound effects album will truly capture the profound emptiness of human existence. Until then, Halloween Sound Effects only reminds Steve that the industry has become a hollow shell of its former self. 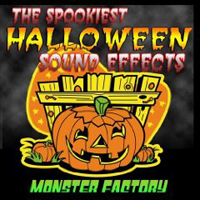 If there's one thing that angers Spooky Steve about Halloween sound effects albums, it's their shocking hubris. This album is the first ever on the Monster Factory label, and it's already the spookiest of all time? Really. Spooky Steve would like you to give him a break, and he's not talking about you breaking him a piece off of your Kit-Kat bar! Listen, Monster Factory, Spooky Steve has been around for a while, and there are some things you just don't do. Namely, you don't have your vampires refer to themselves as such; I refer you to track four, which begins with a vampire stating,"Blah, this vampire's going to have a spooky good time tonight!" By the Bela Legosi impersonation alone, we can tell this man is a vampire! Monster Factory, do you really believe your audience is this stupid? Spooky Steve remembers when Halloween sound effects albums would actually respect their listeners, but it looks like those days are over. The only thing this Monster Factory churns out is Grade-A Garbage!!!